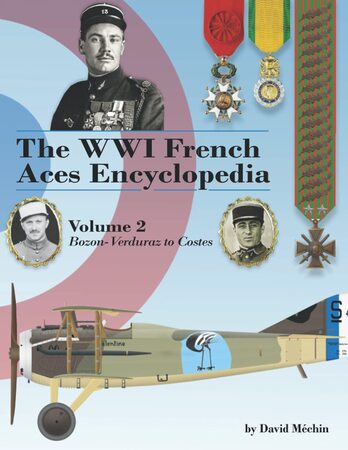 I present the second volume in The WWI French Aces Encyclopedia, Bozon-Verduraz to Costes. Costes is a well-known French aviator, flying to multiple points on the globe after the war, and creating multiple records - for the time - doing so.

Volume 2 starts out with a narrative on the Drachen, the German WWI observation ballon that was hunted by French aviators. Although it was a static target, it wasn't easy to shoot down, mainly because of the Flak surrounding it and each balloon usually protected by fighter aircraft. Many aviators lost their lives "hunting the sausages", as the French liked to call them. It took cunning, and help from many pilots to successfully bring down a Drachen. Volume 2 contains a number of Drachen aces, such as Jean Chaput, Pierre Cardon, etc.