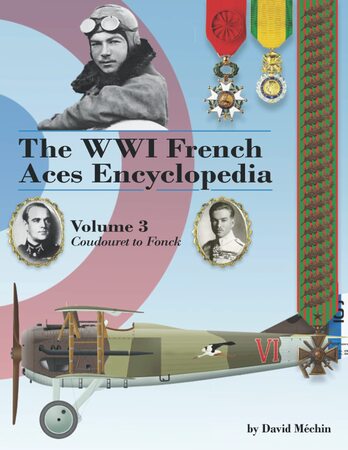 Here is the third volume in The WWI French Aces Encyclopedia, Coudouret to Fonck. Coudouret was initially a two-seater pilot before moving into single-seat fighters, so his tally isn't as high as others. In addition he was flying out of Russia but moved back to France once Russia pulled out of the war.

Volume 3 starts out with a narrative on the Spanish Flu and how it affected the aces' ranks. It wasn't as deadly in that rank as the rest of the world, but it did take it's toll on that fraternity. You can draw your own conclusions about the current pandemic and how it relates.

There are three of France's biggest aces in this volume, Duellin, Dorme and Fonck. The latter of course being the allies "ace of aces" with 75 confirmed kills. Naturally his section in this book is the largest in terms of page count. It's not meant to be a complete biography, though, just highlighting his time during the war and all his flying accomplishments after the war.