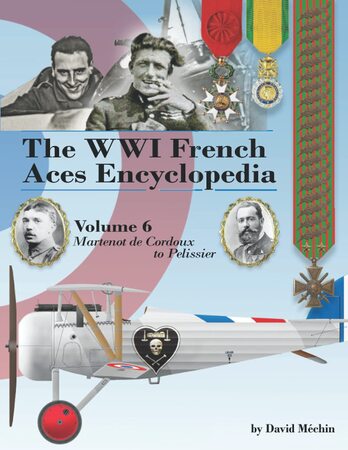 The next review of The WWI French Aces Encyclopedia is on Volume 6, Martenot de Cordoux to Pelissier. René Pelissier was an "older" ace, considered "advanced" at 32 years of age. He had a couple of unlucky occurances and was transferred for a year as an instructor pilot, but even so he managed to end the war with 8 victories and 4 probables.

Volume 6 starts out with "Chronica: CRP - The Air Defense of Paris 1914-1918". The CRP was the Camp Retranché de Paris, or Paris Entrenched Camp. It was brought into existence when Paris was starting to be bombed by different means. However, the "squadron" didn't amount to much, achieving no success during its career, with actual enemy "shoot downs" acheived by the flak guns.

Two other well known French aces - Navarre and Nungesser - are in this volume so their narratives are definitely larger than the rest.