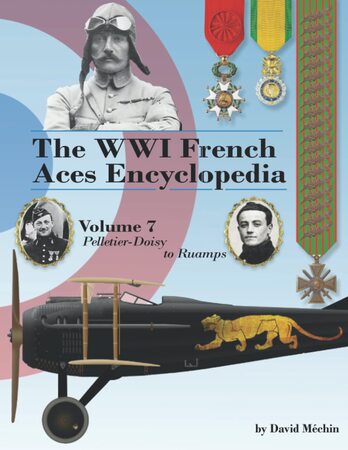 In this next-to-the-last review for The WWI French Aces Encyclopedia, Volume 7, it is the thinnest volume of the entire run. Georges Pelletier-Doisy was an ace during the war - and one of the first fliers along with Jean Navarre - but his better known exploits were for after the war. He made a number of "raids" (what the French term first flights to-and-from another country/area) and was the first to a number of new places. He flew to almost everywhere in that hemisphere.

Volume 7 starts out with a narrative about The Division Aerienne, Strike Force of of French Aviation. It was a group of aircraft, both fighters and bombers, that basically conducted aerial strikes on the ememy's side of fighting. The largest type of aircraft used during these strikes was the Breguet 14.

During the entire run of these books it was evident to me that someone needs to use these books as reference to market an entire line of French Ace WWI decals, especially in 1/72.