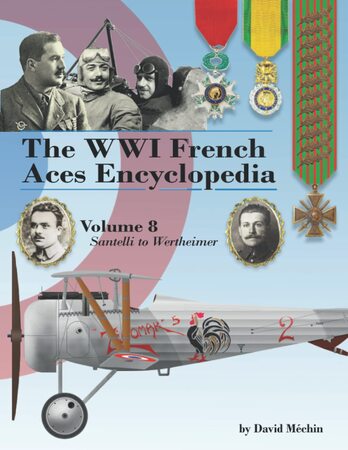 Here we are at the end of the Encyclopedias, the Eighth Volume. This one finishes all known French aces as well as present a few that should be aces, but were denied because of "official" records, most of those very early pilots, flying during the first stages of the war.

Volume 8 starts out with a narrative how the French recorded each "kill", and were far more strict than any other air force at that time. Not only did they require another pilot other than the ace witness the "kill", but the French also required ground confirmation as well. Definitely far more than other air forces that only relied on the word of the pilot.

During the entire run of these books it was evident to me that someone needs to use these books as reference to market an entire line of French Ace WWI decals, especially in 1/72.

Huge, HUGE thanks to Aeronaut Books for sending all volumes of the Encyclopedia to review. All of them are highly recommended and should be acquired if you have any interest in French WWI aviation. Contact them direct for ordering information.