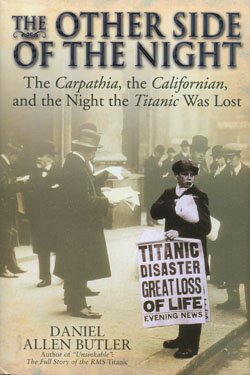 The Other Side of the Night: The Carpathia, the Californian, and the night the Titanic was Lost

Undoubtedly the most famous shipwreck in history, the sinking of the RMS Titanic has been the subject of countless books, documentaries, and movies. The story is well known: the ship strikes an iceberg, tearing a gash in the hull that slowly floods the forward sections of the ship. Insufficient lifeboats, coupled with poor planning and inadequate leadership resulted in only a fraction of the 2200+ passengers and crew surviving. Stories of courage and stoicism, compassion and fatalism abound with regards to those on the Titanic, with many immortalized by Walter Lord's book, A Night To Remember.

While the story of the Titanic is well known, the story of the two closest ships is not. Author Daniel Allen Butler, whose previous work “Unsinkable”: The Full Story of RMS Titanic received high accolades, has turned his historian's eye towards the story of the Carpathia and Californian, and their captains, Arthur Rostron and Stanley Lord. The Carpathia is probably the best known of these two ships, as it was this vessel that arrived in the early morning of April 15, 1912 and affected a rescue of the Titanic's survivors. The Californian, on the other hand, was a ship that purportedly was within sight of the Titanic, yet did not respond to the visual distress signals.

As I was not familiar with the stories of either of these vessels before reading this book, I engaged in a bit of extra research on the two captains and their ships. I found nearly universal accolades given to Captain Rostron and the Carpathia, while the views of Captain Lord and the Californian varied greatly across the board. With this basic knowledge in hand, I dove into this book, hoping to find a clear answer on the Californian issue.

Before answering the Californian question, though, the book delves into the Carpathia and its actions on that fateful night. If for nothing else, this book is well worth the price for this story alone. From the moment of receiving word of the CQD (the precursor to SOS), Rostron threw himself and his ship fully into an attempt to render assistance. From shutting down non-essential items like hot water to preparing lifeboats for immediate use, the Carpathia was prepared for any possibility. Pushing the ship beyond its design, Rostron drove the vessel into the very ice field that sank the Titanic. With extra lookouts and a careful hand on the wheel, the captain managed to avoid the icebergs and arrive on the scene to rescue the Titanic survivors only a couple hours after the ship went down.

While there is no doubt as to the heroic actions of Rostron and the Carpathia, a different story is told aboard the Californian. Captain Lord, on encountering ice, ordered his ship to stop, not wanting to risk his vessel in the ice at night. Adrift, the ship kept its boilers active, ready to steam at a moment's notice. Between 11pm and midnight, the ship's sole wireless operator retired for the night, thus eliminating one method of discovering the fate of the Titanic. The night crew saw a vessel about ten miles away, which fired eight rockets and then disappeared at around 2am in the morning. The evidence indicates that this vessel was the Titanic, and the crew of the Californian witnessed its sinking, mistaking it for a vessel sailing away from them.

The author presents an interesting case for the mindset of Captain Lord, one which fits the evidence nicely. While much debate has raged on in the past (and present, for that matter), the author's assessment remains valid: whether or not the vessel the crew of the Californian witnessed was the Titanic or not, Lord dismissed a clear distress signal and failed to respond. The author notes, though, that even had the Californian responded to the distress signal, it is unlikely that the ship would arrive at the Titanic before it sank. At best, they could have saved perhaps an additional 300 people, at most, and over 1200 still would have perished.

The careful attention to detail and thorough analysis of the evidence makes this an excellent addition to the Titanic historiography. The downside to this book? Well, after reading through it, I found myself wanting to build a model of the Carpathia. Unfortunately, no model exists of that ship, nor of the Californian (both of which, interestingly, were lost during WWI from U-boat torpedoes). For those wanting a representation of these vessels, your choices are hand-made wooden models, or scratchbuilding.

As an interesting side note, the last Titanic survivor, Millvina Dean, just passed away on May 31st at the age of 97.  She was a two-month old baby when she sailed on the Titanic with her family.  She was the youngest passenger on the ship.

My thanks to Casemate for the review copy.