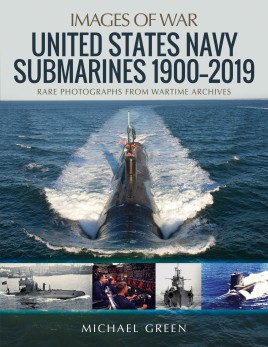 Submarines are a subject of subtleties, as the physical requirements of underwater transportation result in very similar design principles. Over the years, though, innovations in design, propulsion, and materials has resulted in dramatic changes in submarines. This book helps document those changes in US submarines from the early years before the First World War to modern days.

The US Navy's first submarine arrived in 1900 and had the impressive load out of a single torpedo tube, a crew of only six people, and a top speed underwater of a whopping 6.2 miles per hour. Comparing that to submarines of today, which can travel at over 30mph underwater and can carry nuclear-equipped missiles, the changes are dramatic. This evolution can be broken down into two main eras: that period leading up to and including the Second World War, and the period post-WW2.

The first half of the 20th Century saw rapid evolution of submarine design, with each newer version capable of going a bit deeper and a bit faster, perhaps also being a bit bigger, but they all shared the same kind of powerplant: a diesel engine and batteries. After the Second World War, designs continued to follow the diesel-electric model until the advent of nuclear power, which was a true game changer in submarine technology. At the same time, improvements in metallurgy resulted in stronger hulls capable of deeper operating depths.

This book follows that rough guideline, with the first couple of chapters detailing those early diesel-electric boats up through World War Two. The remaining three chapters cover the post-war boats, including a separate chapter on the latest post-Cold War submarines. Each chapter provides a general overview of each submarine class, from the early letter-class boats such as the E-Class and S-Class, through to the named classes such as the famous Gato Class of WW2, Barbel Class, and Los Angeles Class.

In addition to the text overview of each, the primary focus of this book is the photographs, and this book is packed with excellent examples throughout. It would be safe to say that this is the most complete photographic collection of US submarines in print today, and just about every class of submarine gets at least one photo. Some of the more common boats understandably get better coverage, but the author has clearly spent plenty of time in the archives digging up the more obscure submarines as well. While all the early submarines are understandably illustrated in black and white, there are plenty of color photos of boats in the later years, including a shark-mouthed SS-423 Torsk (a Tench-Class submarine) and an overall orange LPSS-574 Grayback.

For anyone interested in US submarines, this is an essential reference to have due to its outlining of the evolution of submarines for the US Navy. The photographs likewise make the book invaluable for the scale modeler, as there are few references for some of the less mainstream boats. My thanks to Casemate Publishers for the review copy.