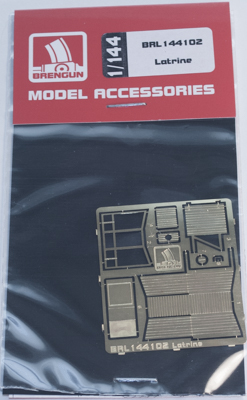 Brengun is known for releasing items no one else would think of; or, release items already made but produced better. In this case you now have the capability to add a 1/144 Latrine to your diorama. In our "neck of the woods" these are known as "outhouses" because – well – they're outside of the main house. But they've been used in other places as well. The modern-day equivalent is more plastic than anything, but the first ones were made primarily out of wood. 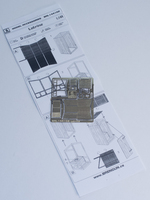 The Brengun 1/144 Latrine consists of a fold-up exterior piece; a fold-up interior frame work piece; and a separate floor, "wall" and "seat". Once folded and the floor, "wall" and "seat" added to the framing, its inserted into the folded-up exterior. The only other exterior pieces are the door and ceiling, and you should be able to leave the door open.

The only thing not catered to by Brengun is any sort of "toilet paper". That you'll have to provide yourself. Plus there are "outhouses" I have seen with an exhaust pipe so if you want to build it that way you'll have to add that yourself as well.

This isn't a kit that will be difficult to put together and will definitely add a level of whimsiness to your diorama or scene. Add a figure and leave the door open and that whimsy will be even more.

Our thanks to Brengun for supplying the "outhouse" to review.