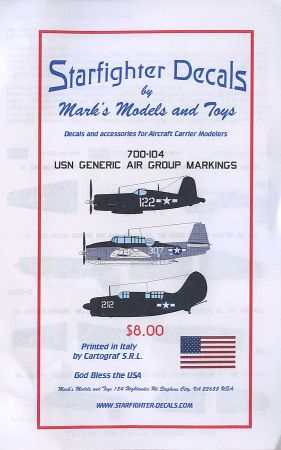 Starfighter Decals has re-issued some decal sheets for those who like to work with 1/350 to 1/700 scale U.S. Navy aircraft.    The decals are tiny and precise.  Registration is exact in all situations; they’re perfect.  The decals are packaged with tissues interleafed with the decals sheets to protect the decals.   Everything appears fine.

The one thing I don’t like is that most of the plastic bags that hold the decals have flaps sealed with adhesive.  They’re good to hold the bag shut until you buy it and open it.  I don’t think they’re made to be resealable.  In one case, I was simply trying to open the bag but tore a large hole in it while opening it, not a good thing.   Also, if you don’t use all the decals and plan to put some back into the snug bags, you may find the sheets getting hung upon the adhesive, creating some aggravation.  Only one set of the Starfighter Decals had a Ziplock-style resealable bag.

350-22-S  This set of silk-screened 1/350 scale decals represents the squadron markings of aircraft based on the USS Bunker Hill, CV-17, in early 1945.   The five sheets of white arrow tail and wing decals in this set will mark 90 aircraft including F4U Corsairs, TBM Avengers, F6F Hellcats and SB2C Helldivers.   A four-color instruction sheet is included to guide modelers in how to place the decals.  $20

This set of silk-screened 1/350 scale decals are used for generic markings on 90 U.S. Navy WWII aircraft including SB2C Helldivers, TBM Avengers and 70 F4U Corsairs or F6F Hellcats.  Sheet 350-A has individual airplane numbers, in black and white, plus markings for air group commander aircraft and the fuel tank tape markings seen on F4U Corsairs.
Five sheets, 350-25B,  hold two types of national insignia, those with white stars and bars with blue surrounds and those that are just white stars and bars.  One sheet, 350-25A, holds buzz numbers, air group commander markings and fuel tank tape markings for Corsairs.   A 4-color instruction sheet provides placement information.    $15

These 1/700 scale decals provide markings for about 90 aircraft that served in two U.S. Navy air groups on the USS Enterprise from 1944-1945.  The markings are for F6F Hellcats, SB2U Helldivers and TBM Avengers.  Air Group 20 was the first of two night fighter groups deployed in the Navy which used F6Fs and TBMs.   Included are buzz numbers and white triangle tail markings for aircraft plus yellow, white and black deck markings for the Enterprise.  A 4-color instruction sheet shows placement information.  $10

These 1/700 scale decals are generic markings for U.S. Navy aircraft during WWII.  Three sheets of decals have enough national markings and buzz numbers for about 90 aircraft, says Starfighter:  F4U Corsairs, TBM Avengers and SB2C Helldivers.   A four-color set of placement instructions is included.  This set replaces 700-2 U.S. national insignia from August 1943 to 1947.  $8

These 1/700 scale decals provide markings for the 90 aircraft aboard the USS Bunker Hill in 1945.  These include the white arrow tail and wing markings for Air Group 64’s  F6F Hellcats, SB2C Helldivers and TBM Avengers.   A couple 17’s are included for the flight deck of the model ship.  $10

These 1/350 scale decals are for eight F-14A Tomcats assigned to VF-84 in April 1980.  The yellow, black, white and red decals are in perfect registration and will dress up any F-14As you put on the deck of an aircraft carrier or a land setting.  The markings include national insignia, wing, yellow and black bands used on the wings, anti-glare panels ahead of the windshields, aircraft numbers, markings for the ventral fins and jet intake warnings.  VF-84 used these markings when it was part of Operation Eagle Class, the mission that was to retrieve Americans held at the U.S. embassy in Iran. A four-color set of placement instructions is included.  $10

Our thanks to Starfighter Decals for providing the review sheets.