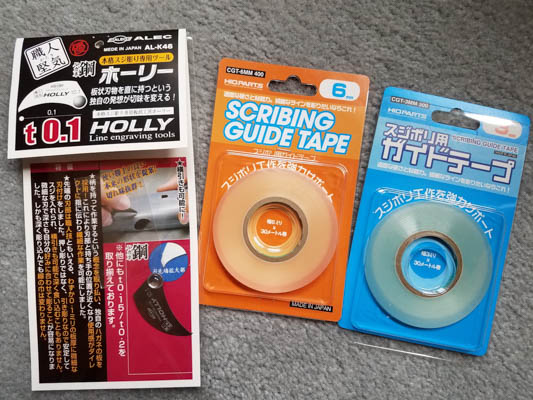 I’ve tried stainless steel (and other inferior metal) scribers that are too big, too wide, and that I’ve had to reshape using my Dremel motor tool and rough sanding discs/’tubes’. These work great when properly and laboriously modified that way, but soon become dulled and then need ‘re-sharpening’. Also, many previous manufacturers of such “dental tool looking” scribers have ceased production of them over the last ten years or so, forcing me to look elsewhere and consider some pretty odd replacements – most of which have turned out to be (shall we say while maintaining a family language website here?) “less than satisfying”?

Right now, I have a pair of butchered 1/72nd (of course!) Me 262A kits on my model bench – each destined for a separate diorama, so they’re being modified to ‘under construction’, and/or, ‘post-war wreak’ status. One is the older Hasegawa kit (still one of the best in God’s scale IMO), and the other is the newer (but less well molded) Revell of Germany kit. The subjects being modeled required the chopping up of pretty much all of their main components - removing access panels, sawing off noses, cutting away wing slats & fuselage to wing fairings, fitting ‘opened up’ resin replacement engines in place, and so on.

Naturally, I then needed to re-scribe many of the panel lines since many were obscured or eliminated by these modifications, plus a few that needed adding because the kit’s designers missed a few details, etc.

So this is the stage I was at when asked to do the reviews for these three new (to me anyway!) products. And the request arrived at a perfect time because I was also faced with having to re-work (again) my existing dulled ‘dental pick’ style scribers and wasn’t looking forward to that laborious task either.

Now for some background here:

I tried this new tape and scriber on three different surfaces:

All surfaces were thoroughly sanded smooth and ready for paint other than needing panel lines strengthened, added, or replaced.

But first some basic observations:

The two widths of ‘scribing guide tape’ are rather thick (but we do need that edge for guidance!), but they’re also flexible for easily going around curves and with a self-adhesive applied to the back of it for adherence while scribing – important!

The Holly t0.1 ‘Line engraving Tool’ is about 1.5” long, and EXTREMELY THIN! I believe the “0.1” refers to 1/10th of a millimeter. It’s so thin that it flexes noticeably from side to side if too much pressure is applied, but never collapses upon itself or bends. It appears to be made of an extremely high quality of spring-steel. It has a two sided clear rubber(?) knob at the handle end for gripping. Its point is very sharp, very pointed, and very thin at its 0.1 thickness so is perfect for 1/144th scale or 1/72nd scale models if we want to stay within the realm of ‘scale thickness’ (and we do).

Onto the actual usage now over the three different previously described and prepared surfaces:

So there you have it. Two (3 counting the two different tape widths tested I suppose?) excellent products when used well and when going into it with some open-eyed foreknowledge of where you need to be more careful.

But overall, this scriber performed well, appears to have remained very sharp even after many repeated usages – even on Hasegawa’s harder than your typical kit’s plastic (the other kit was a Revell). I like the shape, rubber gripping ‘knobs’ and compact size too, as it all contributes to having a bit greater control while getting in closer. I’d like to try a slightly thicker (0.2mm?) version if available because that might be just right for 1/72nd scale subjects. The scribing tape did provide a reliable solid and higher scribing edge (than normal tapes) for all surfaces though be careful when applying over putties and acrylic primered surfaces! Also note that this tape can be re-used all over the model as the adhesive backing degrades only gradually.

Please give these products a try, as they might get you to change ‘your scribing ways’ on that long dusty and bumpy road to better modeling!

Our thanks to Model Paint Solutions for the review scriber and tapes.