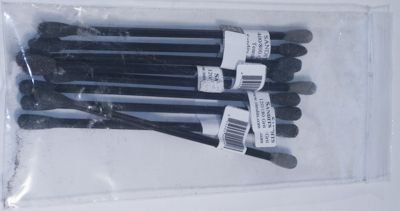 Modeling tools. We all have them and there are times when the ones we have just aren't doing the job. Either we'll cobble something together on our own, or we'll go looking for something that could work for the task at hand.

Which is how Sandits were born. From their site: "Sandits are a prime example of necessity being the mother of invention. The inventor had an old radio he kept outside, and one day it stopped working. The Inventor, being rather handy, saw that the battery connections were all corroded. He wanted to clean them, and found himself trying to wrap sandpaper on a screwdriver to get into the tight area. It proved to be very difficult, and didn't work that well. Out of that, he came up a cotton swab shaped sanding stick, a Sandit!"

There are two distinct shapes and four grits, two different grits per "stick". The two shapes are the teardrop and the wedge. The teardrop comes in four grits: 120/180 and 400/800. The wedge only comes with two grits: 120/180. While a little large to fit inside of smaller-scale intakes (I tried to show how it could work in the intake of the Italeri 1/72 F-35) it could work in a little larger areas. I also see where this could work inside of exhausts and possibly wheel wells.

So if you're looking for a sanding solution to fit into some areas, Sandits could work for you. Sandits can be used either wet or dry.

My thanks to Sandits for sending the sample pack.