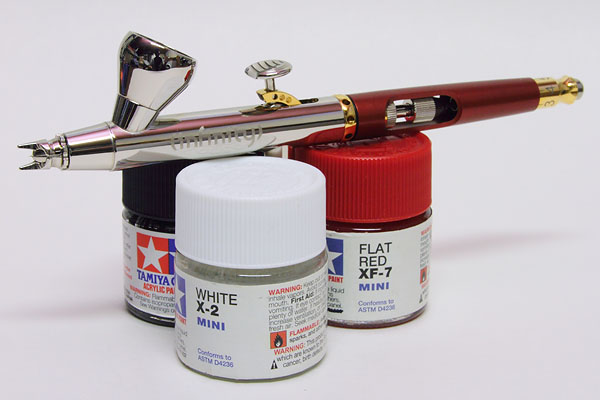 The requirements for proper airbrushing are the same regardless of what type you choose. You need an airbrush (obviously), a source of clean, dry air, and you need paint. The first few articles in this series will cover each of these in some detail, and we'll start with the airbrush.

Just what IS an airbrush?

Quite simply, an airbrush is a tool that atomizes paint with air to produce a continuous and consistent coat of paint onto a surface. While humans have been painting with crude airbrushes for thousands of years (a simple form being a straw filled with a colored liquid, which is then blown onto the canvas, which could be anything from a pot to a rock wall), the first modern airbrush came into existence in the late 1800s. Francis Stanley and Freelan Stanley (of Stanley Steamer motor carriage fame) patented a design for coating photographic plates.

The first time the name airbrush was applied to the concept came with Abner Peeler's patent for a painting tool that utilized a hand-operated compressor. Peeler created his airbrush out of bits and pieces, starting in 1879. It took several years of refinement before it was a viable commercial tool, and even then it required the help of a second person, Liberty Walkup, who promoted the new Air Brush extensively. At this point, interest began to grow in airbrushes, and further refinements led to Thayer and Chandler presenting what is considered to be the first true atomizing airbrush in 1893 at the Chicago World Columbian Exposition. All modern airbrushes can trace their roots back to this original pen-type airbrush.

How does it all work?

The basic concept of an airbrush involves moving air rapidly through a narrow tube, which creates a lower pressure in that tube. This establishes suction on an attached paint reservoir, drawing the paint up into the airstream where it is then atomized and exits as a mist from the airbrush tip. The result from the atomization creates smooth finishes and gentle blends between colors.

That is a very simple explanation, but let's dig deeper into the functions and innards of the airbrush. There are three elements that all airbrushes have: a trigger, a feed system, and a mix point. All airbrushes can be categorized based on these three items. 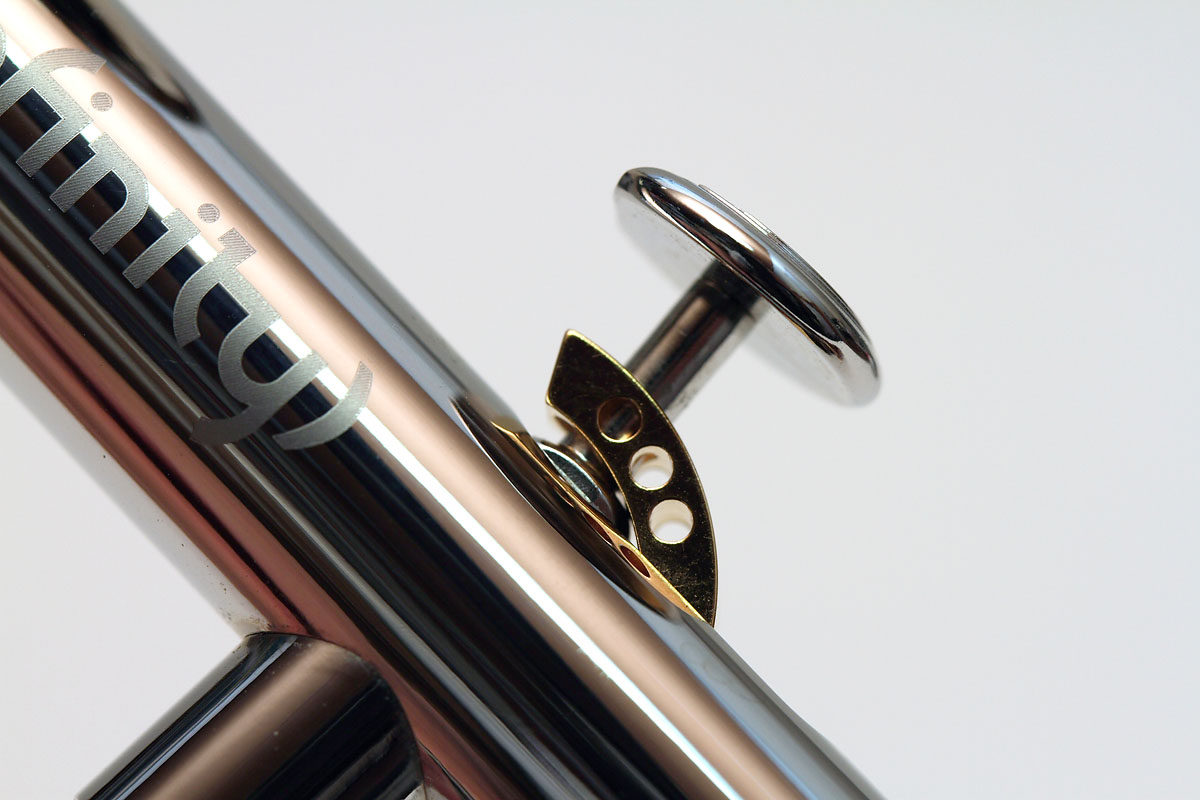 This is the tactile point for the artist, as it is through manipulation of the trigger that the airbrush puts paint on substrate. There are two types of triggers found on airbrushes. These are referred to as single action and dual or double action. The single action trigger mechanism is a one-direction trigger, where the user presses down to establish both air flow and paint flow. Given their simpler construction, single action airbrushes tend to be less expensive. Their simpler operation also makes them ideal for the beginner.

Double action airbrushes utilize a two-step trigger, which provides the artist with considerably more control over the airbrush output. Like a single-action airbrush, the downward trigger movement starts the air flow. Paint flow starts with the movement of the trigger backwards, with more backward movement resulting in an increase in paint flow. This two-stage trigger action results in a more complex airbrush assembly, with most using a separate needle. 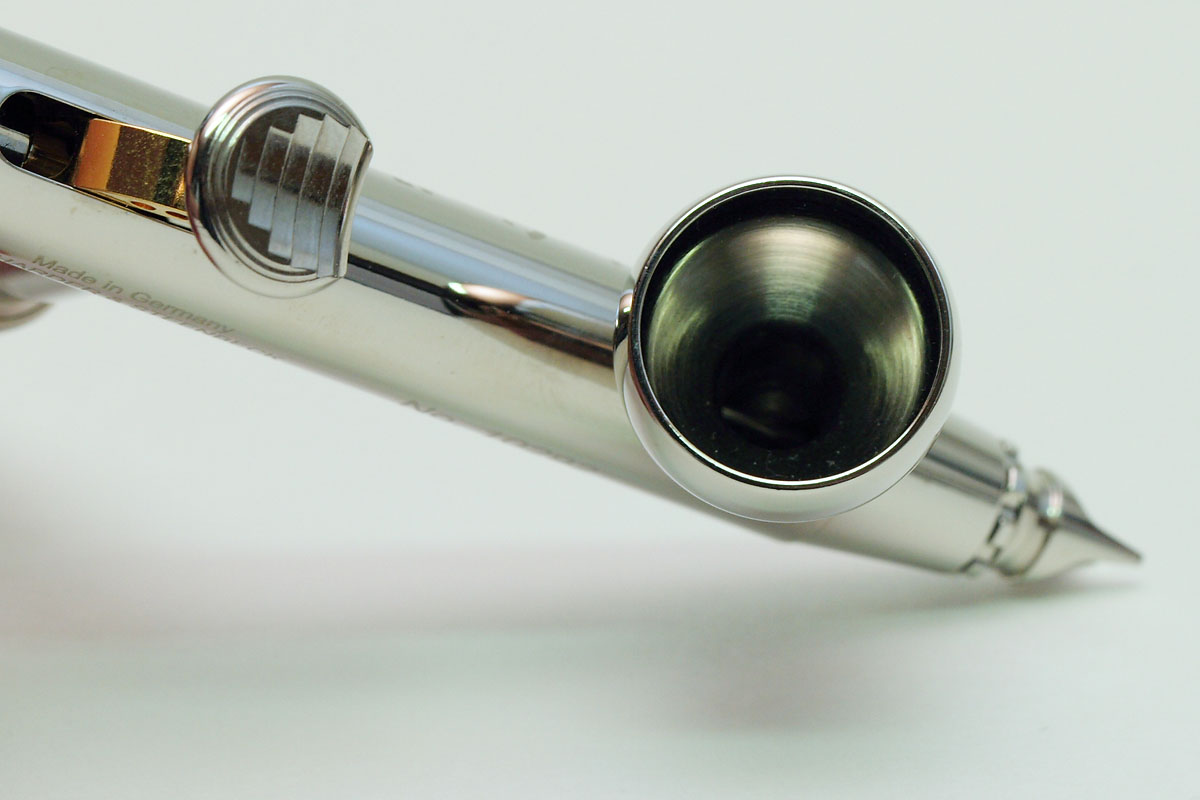 The paint has to get into the airflow somehow, and there are two main feed systems available. The first is a gravity feed system. This places the paint reservoir on the top of the airbrush and uses gravity to help pull the paint into the mixing chamber. With this gravity assist, the airbrush does not need to have as much suction, and therefore lower air pressure can be used. Because of this, the airbrush manufacturer can design the brush for finer atomization, which generally results in much finer detail work possible.

The second feed system is a siphon feed system. This can be done via bottom or side, with each having their own merits. Both have greater visibility over the top of the brush, although that might not be much of a consideration for the modeler. The bottom feed system can generally take larger capacity paint containers, allowing the artist to airbrush large areas before refilling. Side feed systems place the paint container on either the right or left side, which can work well for those who do not like the balance of a bottom feed brush.

The other main advantage to side and bottom feed airbrushes is that the paint container is generally removable, while that of a top feed brush is generally integral to the brush itself. This allows the artist to mix the paint separately from the airbrush, and in some cases even have pre-mixed bottles of paint ready for attaching and spraying. A top feed brush requires paint to be transferred to the airbrush from one container to another, which can be messy at times. 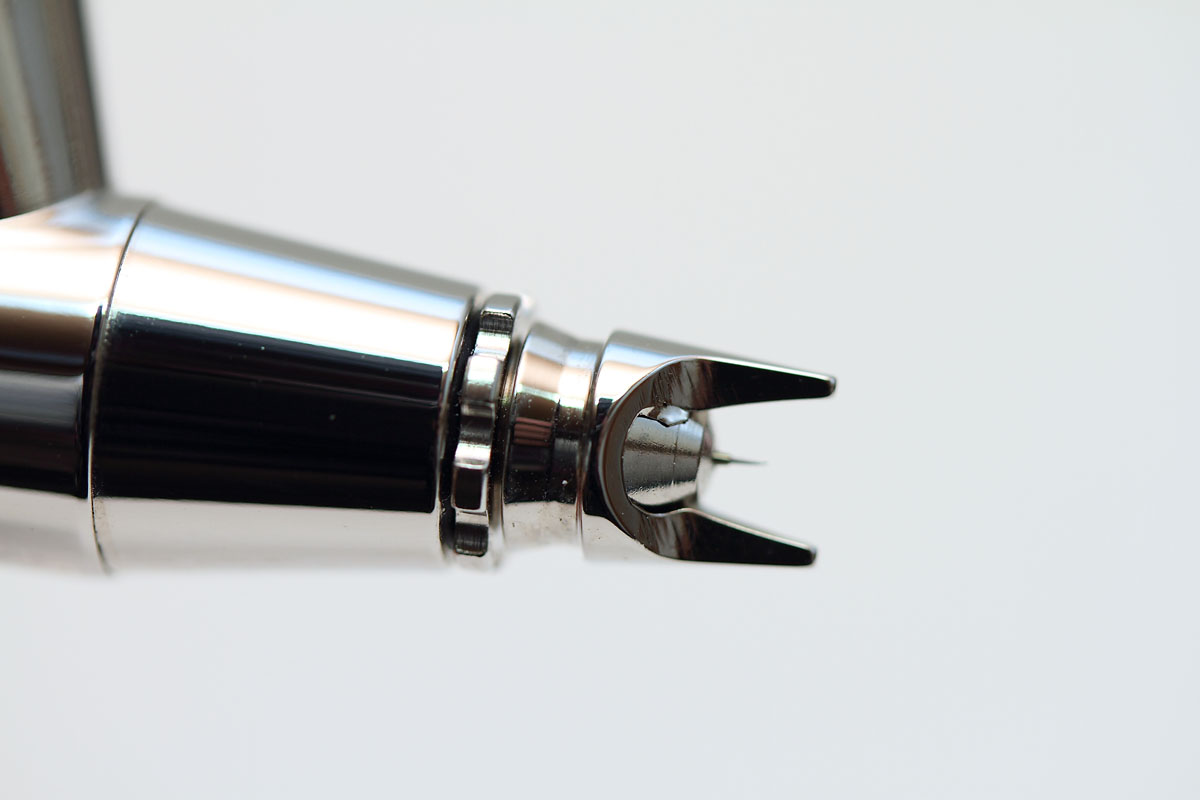 Finally, we come up to the mix point. This is where the air and paint meet up to create the atomized mist of color. These are separated into external mix and internal mix, and these are pretty logical definitions. An internal mix airbrush will mix the paint and air together inside the airbrush, then allowing it to exit as a mist. Most double action airbrushes utilize this method of mixing. External mix airbrushes have the air exiting the airbrush before mixing with the paint. This is a much simpler system, and is the type used in most single action airbrushes.

With the definitions and types out of the way, let's look at the inner workings of a modern airbrush. The airbrush we'll be using throughout this series is the Harder & Steenbeck Infinity airbrush. This is a double action gravity feed internal mix airbrush. As we can see from this exploded photograph, there are quite a few parts to this airbrush, which can look daunting to the uninitiated. Let's break it down, though, and remove some of the mystique.

The main body incorporates the mixing chamber, the air supply connection, and all the connecting plumbing. Attached to this is the handle, which extends out the back and provides balance to the brush. It also allows for a comfortable fit in the hand, which is a very important factor, as you want an airbrush that is comfortable to hold. 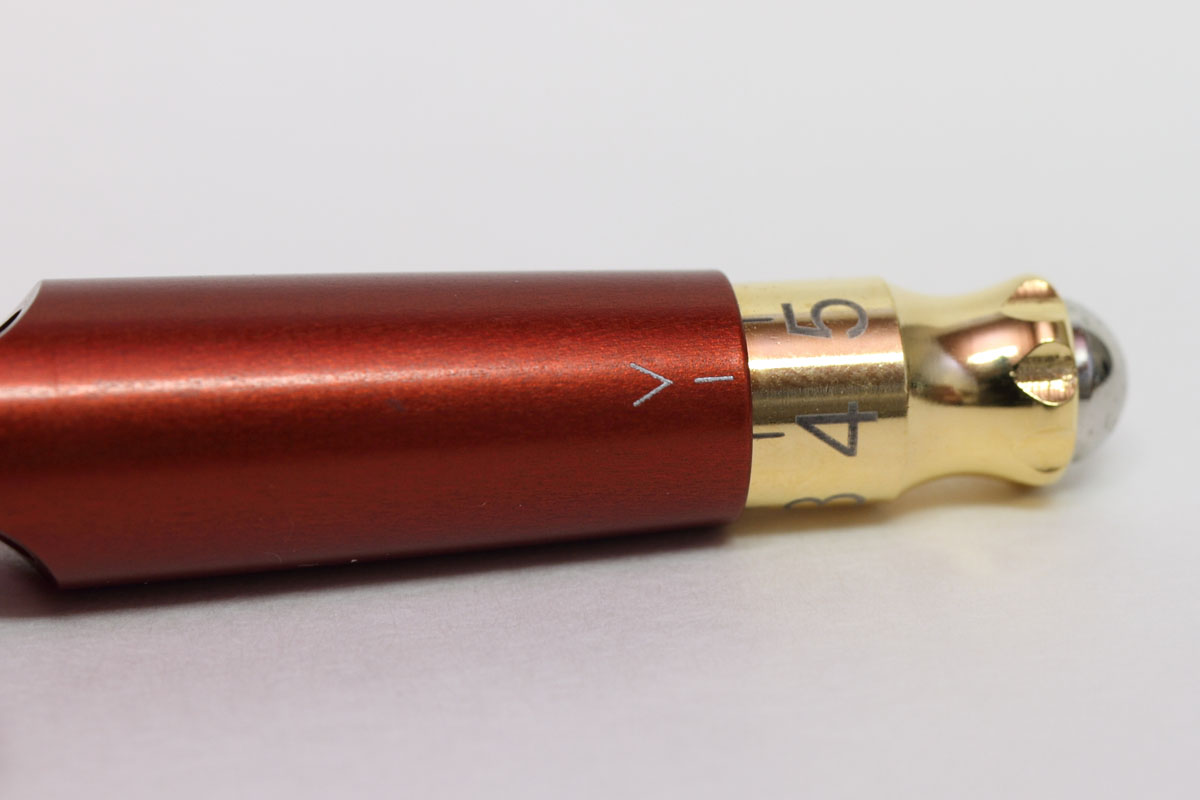 On the Harder & Steenbeck Infinity, the handle has an added feature on the back end that allows the user to limit the rearward travel of the trigger. Recalling the effects of rear trigger movement in a double action airbrush, you can see that by limiting that movement you can limit the amount of paint used. Through adjusting this dial, the artist can establish a fixed spray pattern and maintain that pattern throughout their project (think camouflage fade lines, held consistently across your entire model).

As this is a gravity feed airbrush, the paint cup is integral with the main airbrush body. On this specific brush, the upper half of the paint cup is removable, which improves cleaning. Although not clearly seen in the photo, at the bottom of the cup is the needle, which runs through the body to the tip. 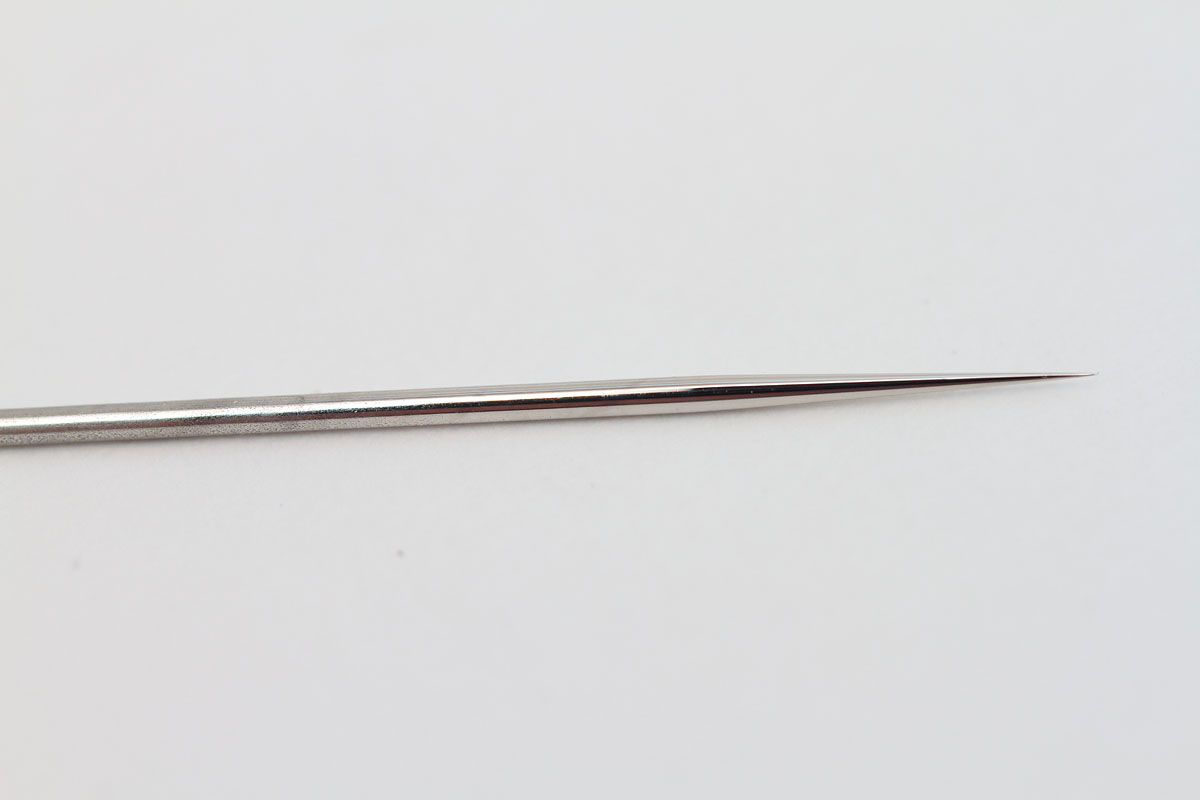 The tip and needle are essential features to establishing atomization and flow. A smaller needle limits the paint flow, which would allow for finer detailing. This needle fits into a tip, and these two pieces need to be precisely milled to fit accurately. Likewise, damage to either of these two pieces can result in unpredictable results, and one should not hesitate to replace either the needle or tip at the first sign of damage. 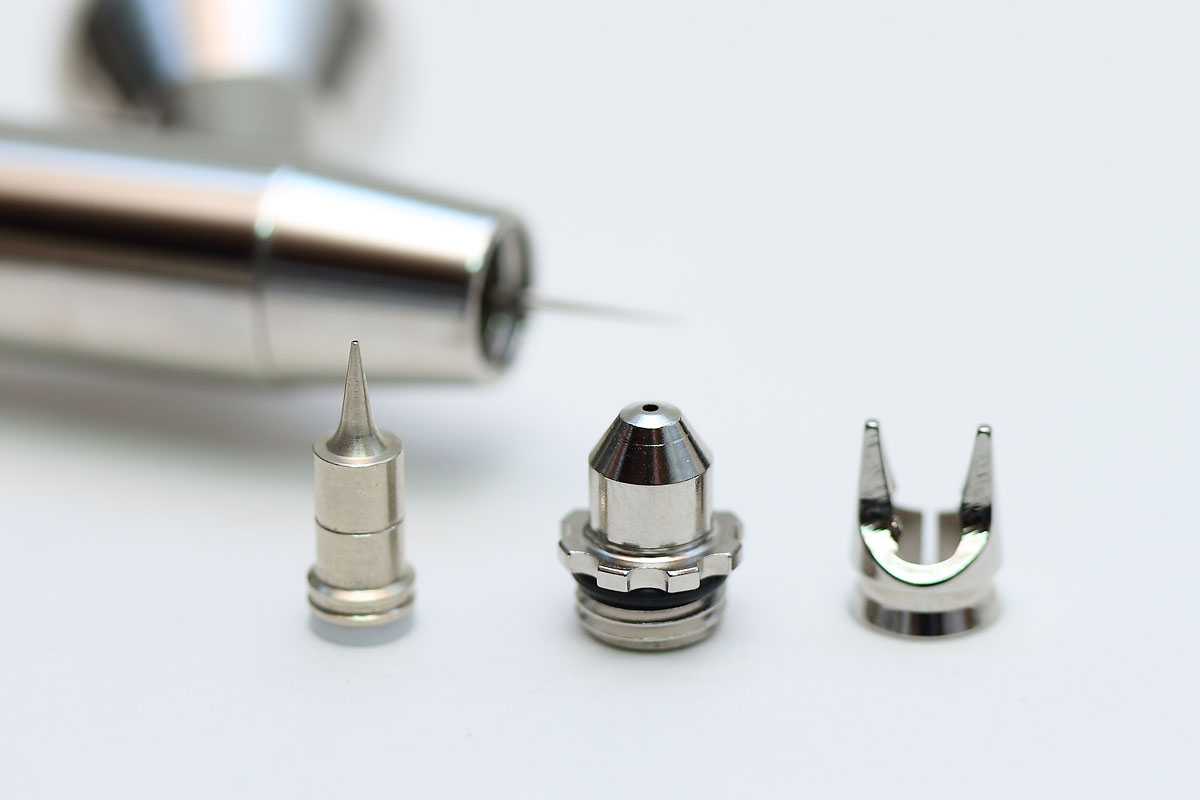 The tip assembly here consists of three main pieces. The piece on the left is the part the needle fits into. The middle piece holds the tip onto the body of the brush, and the round nose offers a clear view for close in work. The piece on the right is a protective tip for working further out that offers some visibility but still protects the tip and needle from potential damage, while not affecting the atomization process. 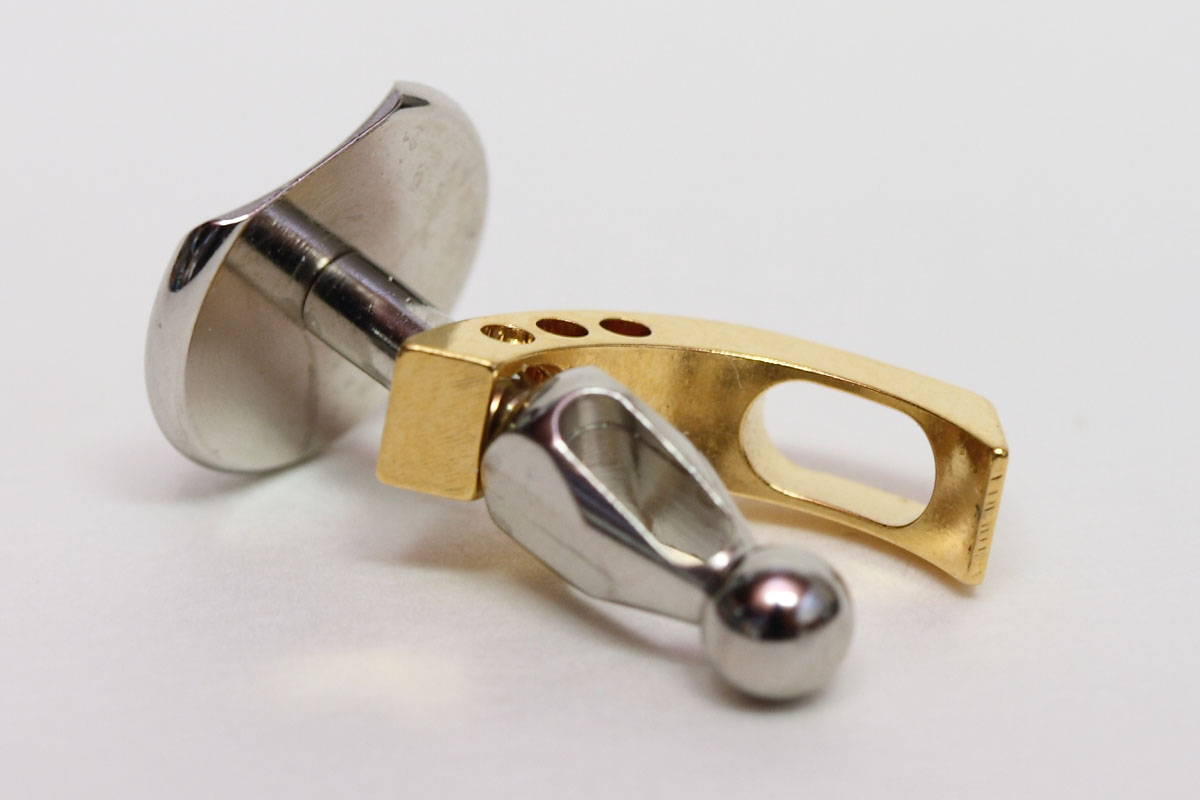 The trigger assembly in a double action brush has to do two things. It has to be able to start and stop the air flow, and the trigger itself does that (in this case, the ball foot of the trigger depresses the valve in the main body to start the air flow). 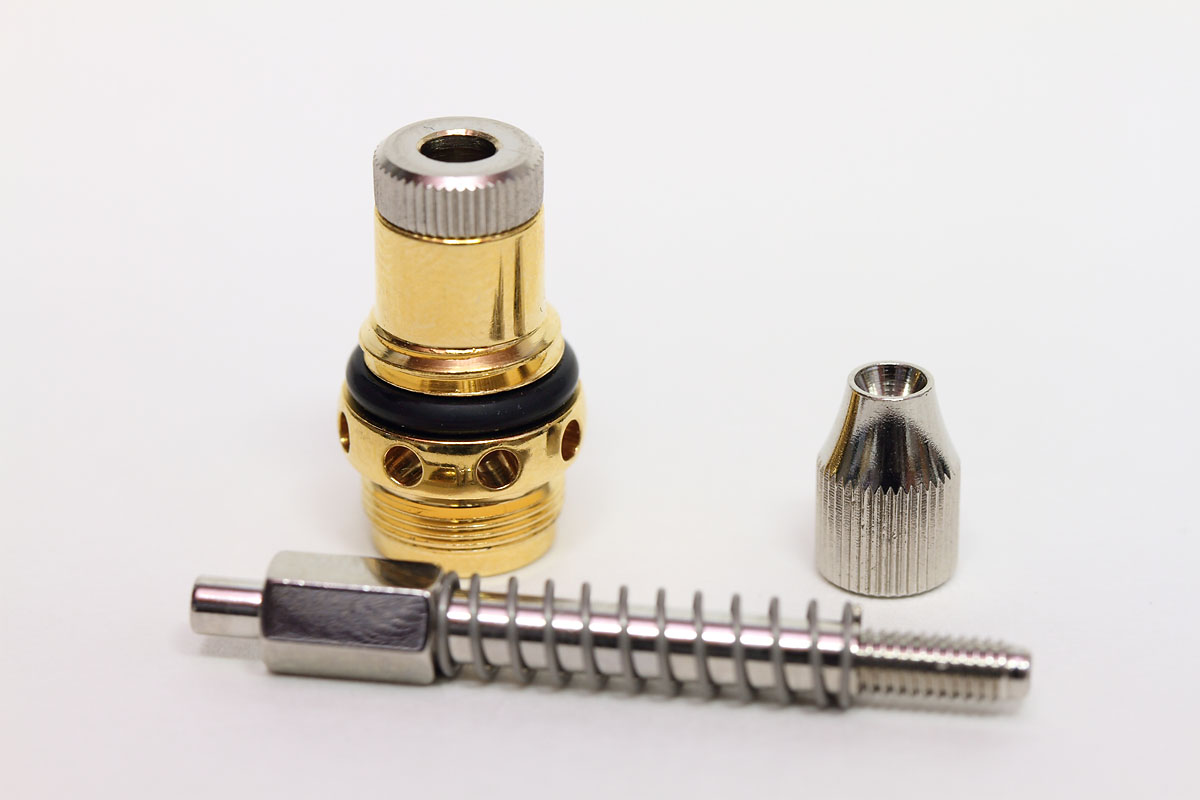 The trigger also has to control the paint flow, and this is done by manipulating the needle. This is done by the spring housing seen here. The needle fits into this housing, with the knob compressing the split end onto the needle to hold it firm. The front end of that piece fits against the rear arm of the trigger, with the spring establishing tension to ensure that the needle remains closed until the trigger is pulled back. By replacing the spring, the user can adjust the amount of tension, making it easier or more difficult on the backward stroke of the trigger.

This should provide a solid base of what an airbrush is and how it works. Whether single or double action, gravity or siphon feed, internal or external mix, with proper operation and maintenance, great results can be achieved with virtually any airbrush. Next we will examine the second item needed for proper airbrushing, an air source.