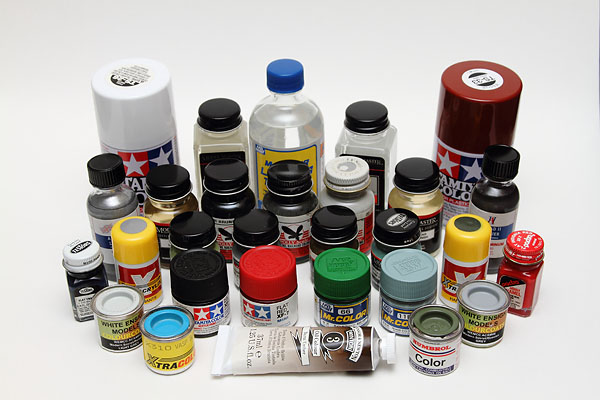 The final component in an airbrushing system is the paint. This is the biggest variable to the modeler, as there are so many different brands of paint, with lots of different names and types. This can be quite confusing to decipher, especially for the novice airbrush artist. Given the format of airbrushing (i.e., atomization of paint), understanding the components of paint will give the modeler a better feel for how to work with the varied options available.

What's In A Name?

Acrylics, lacquers, enamels, water-based, oil-based. What do all these terms mean, and how do they affect airbrushing? The above list of terms is actually a mish-mash of component descriptors, which are often intermingled where they shouldn't. That leads to confusion, such as when someone gets their first bottle of Gunze Sangyo Mr. Color acrylic lacquer (wait, I thought acrylics were water based!). So, let's break down just what goes into a bottle of paint.

There is only one component required in paint: a binder. Finding a paint that is nothing but a binder is tough, though, as most paints generally have several components. These include pigments, solvents, and additives. Each component performs a specific task, and all need to be taken into consideration when airbrushing. 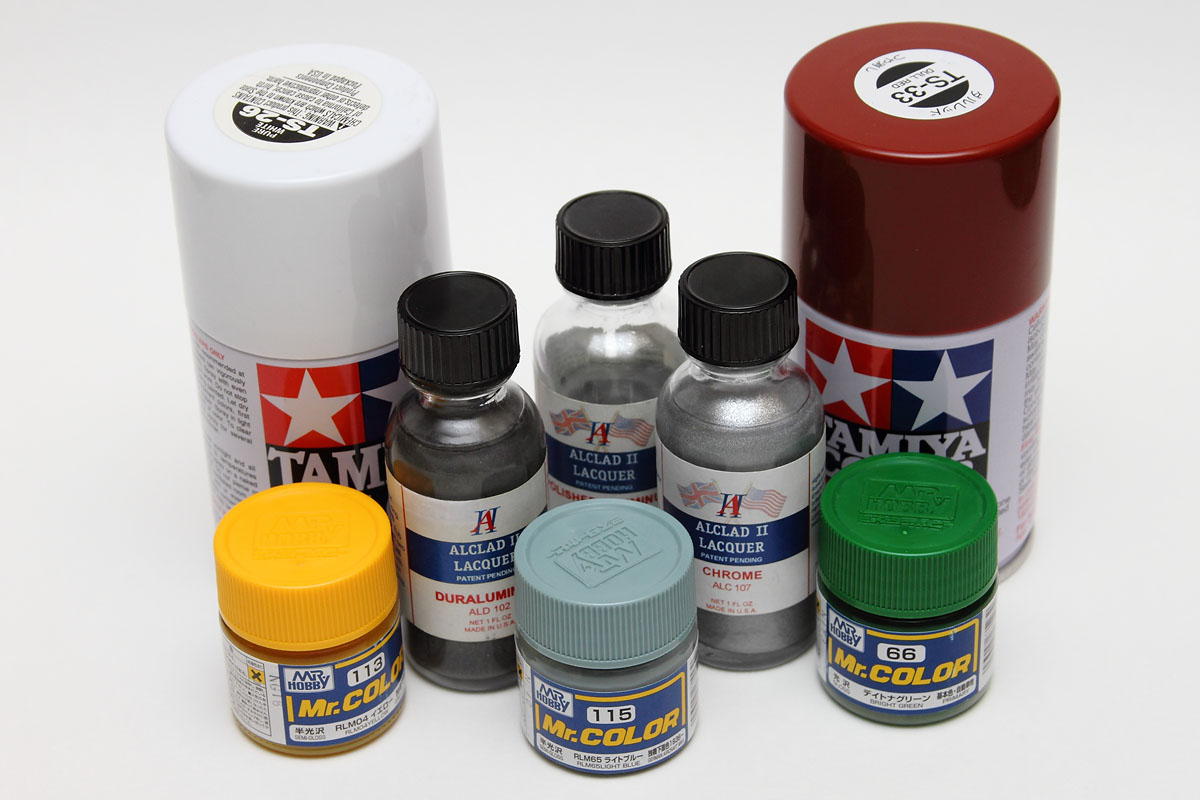 Common lacquer paints
Let's start with the fun stuff first, the pigments. It is pigment that gives paint its color. There is a huge variety of pigment types, both natural and synthetic. While the exact blend of pigments is generally a closely guarded secret for paint manufacturers, the basic types are fairly well known. Titanium dioxide is the most common pigment used for white and white tinting, while carbon black is the most common for black and black tinting. Other natural pigments include red iron oxide, cadmium yellow, and phthalo blue. Synthetic pigments generally are engineered and manufactured molecules and silicas.

Pigments are one of the components that can be toxic in paints. Probably the best known toxic pigment for paint was lead, which was used as a white solid and tint base. Its replacement by titanium dioxide began in the late 1960s/early 1970s, and in 1978 lead-based paint was banned in the US. While titanium dioxide is far safer than lead, it is still a toxic substance, and a known carcinogen. The difference, though, is in the levels required for a dangerous build-up. Unless you are airbrushing for hours on end, day after day, in an unventilated room, it is unlikely that any of the pigments present in model paints will build up to dangerous levels. 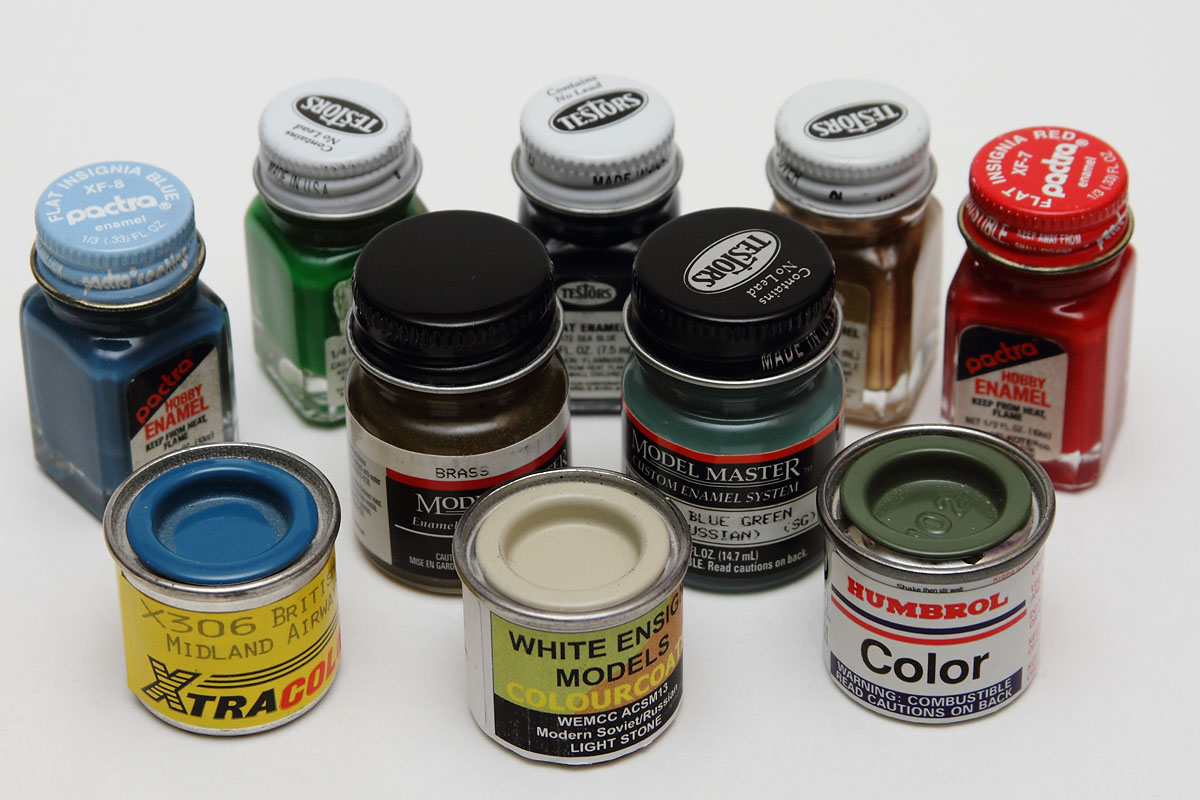 Common enamel paints
The binder is the most important part of paint composition, as it is this that forms the coating. The binder is where paint gets its gloss/flat component and its durability, in addition to binding the pigment together (hence its name, binder). Like pigments, a binder can be natural or synthetic. For model paints, the two most common binders are oil and acrylic. Other examples of binders include polyesters, polyurethanes, and epoxies.

In addition to type, binders can also be separated into their drying and curing mechanisms. It is the drying and/or curing mechanism that transforms paint from liquid form to solid form. Drying and curing are different processes, and it is important to understand the differences. Drying involves the evaporation of the solvent, while curing is a chemical process that transforms the liquid binder into a solid. Paints can involve either drying or curing, or they can involve both.

A lacquer paint is one that has a solid binder dissolved in a solvent. Through a simple evaporative process, the binder solidifies, forming the paint coat. Because the binder is a dissolvable solid, it can be reconstituted through the addition of solvent. This can be a problem with painting, as there is a risk of future coats blending with previous coats. This is less of a concern with airbrushing, as the drying time is shortened due to the atomization of the paint, but it is still a possibility.

Enamels are a curative binder that require oxidization to polymerize, or set up. The advantage of this is that, once cured, the paint coat is very durable and not susceptible to follow-on coats. As it involves oxidization, though, it cures from the outside in. That means that while the paint may be dry to the touch on the surface, paint underneath could still be in the process of oxidization. Adding coats of paint over enamels that have not fully cured can result in problems, such as the undercoat not fully cured being pulled up by masking tape. 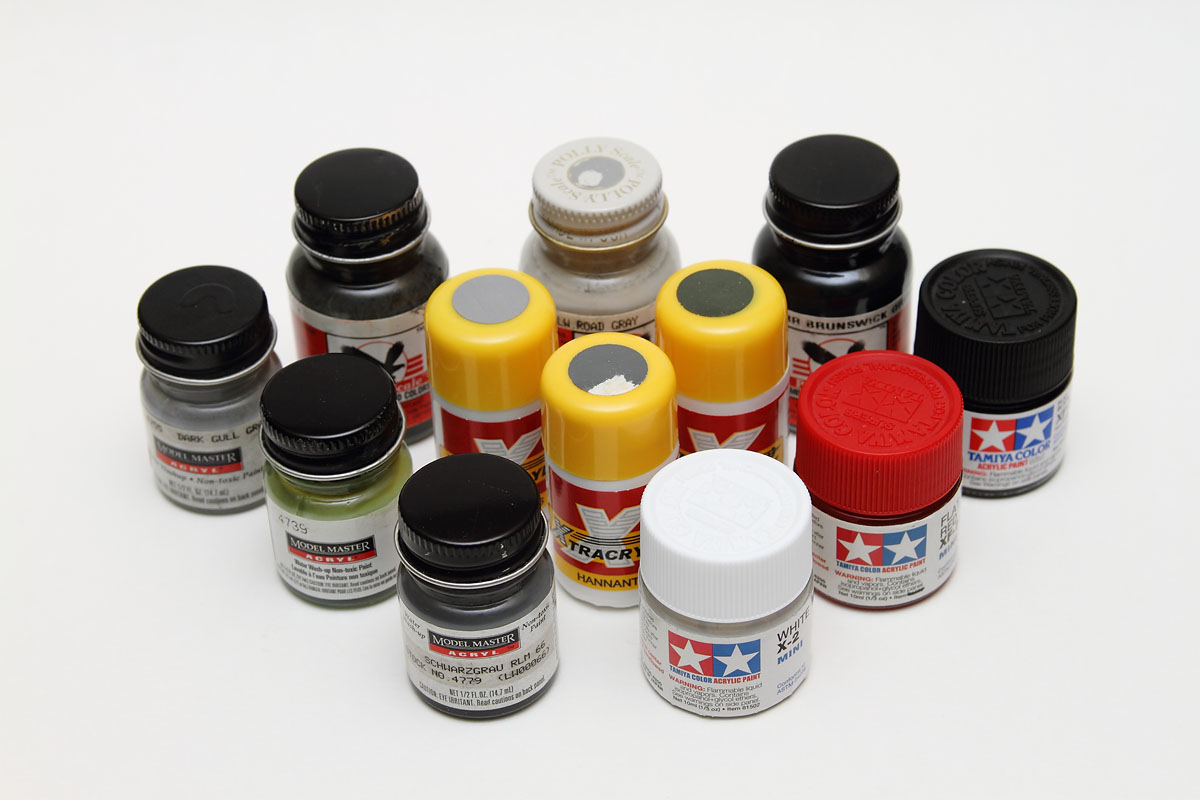 Common water soluble paints
Solvents are essential to airbrushing, as they serve to alter the viscosity of the paint. Viscosity is important as you want the paint to be thin enough to properly atomize in the airbrush. Solvents also adjust the curing properties of paint, though, so that needs to be taken into consideration as well. Common solvents include alcohols, mineral spirits, glycol ethers, ketones, and water. Generally, paints are composed of a mixed solvent formula, which is why using the specific brand thinner will yield better results than a jug of paint thinner from your local hardware store (or water from the tap, if the paint is water-based).

Finally, there might be various additives, in the paint. These can be just about anything, and can be used to thicken paint, alter surface tension, modify finish (such as a flattening agent), improve paint flow and stability, and more. An example of an additive would be talc as a thickening agent. These are generally inert components, and should not affect airbrushing much, if at all.

Putting It All Together

So now that we know what makes up paint, we can make sense of some of the labeling. Back to the example of Mr. Color acrylic lacquer, we now know that it is a dissolved acrylic binder that sets through an evaporative process. That one is easy, as all the information is in the title. Enamel paints are also fairly easy to figure out, although the binder might not be apparent at first (pretty much all model enamels have an oil-based binder). With enamel in the title, though, you know it involves an oxidative curing process, drying from the outside in.

But what about those paints commonly labeled 'acrylics'? These include Model Master Acryl, Humbrol Acrylics, Tamiya Color Acrylics, and others. These are often labeled as water soluble paints, which means that the binder is diluted by water, not dissolved. As such, these paints cannot be lacquer-based, as the binder is not a dissolved solid. These paints therefore employ some form of curative process, very likely oxidative in nature.

Knowing how your various paints set up will have an impact on your airbrushing. With lacquers, problems can arise from having the solvent evaporate before the paint reaches the model surface. For paints that involve oxidation, the atomization of the paint can increase the oxidization rate, resulting in paint curing immediately on leaving the airbrush. This can be seen in tip build-up, where dried paint strings up off the nozzle of the airbrush. This can be tough to counter, as you need to keep the binder from curing too fast. Here is where the specially-formulated manufacturer's thinners work very well. Also at play here is the environment in which you are airbrushing, as air temperature and humidity will also affect the drying and curing of paint. It is because of this (the environment) that any airbrushing how-to article cannot be taken as a guaranteed method to results. While one can control air pressure and paint thinning, matching atmospheric conditions is much more challenging, and really not practical. So, for the next articles in this series, view the various technical settings as guidelines rather than inflexible rules, and use them as a starting point to determine the proper settings for your particular situation.