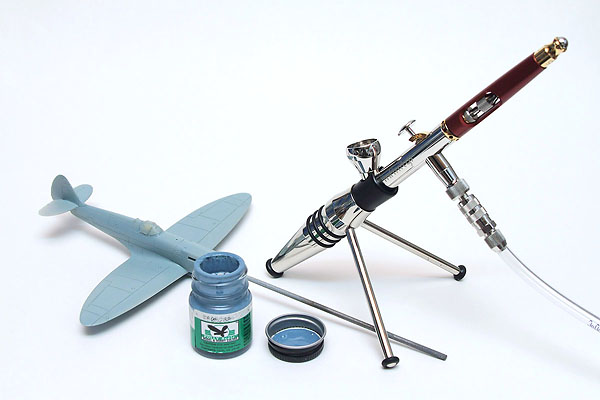 Now that we have gone over the technical components of an airbrushing system, it's time to put some color on a model. We'll start out with a list of materials and equipment, then dive into the process.

The first step is, obviously, to get your model ready for airbrushing. This generally means assembling the model, but sometimes it works out better to paint parts before assembly. Small details such as landing gear and propellers and such are often better left off the model before painting, as they can be damaged in the twisting and turning that invariably occurs during the airbrushing process. Also, some paint schemes benefit from having major sub-assemblies separate (if possible). For example, an aircraft that has a hard line color demarcation between the wing and fuselage. If it is possible to do, it would be better to paint the wings separate from the fuselage, to avoid complicated masking. For our subject aircraft, though, we have none of those problems, as the entire aircraft is overall PRU Blue.

With the model ready for paint, the first step is to lay down a primer coat. This can be done with the airbrush (as I did in this case), or it can come from an aerosol can. The latter could be a model-specific aerosol primer such as Tamiya primer or Mr. Surfacer 1200, or it can be a generic brand, such as Krylon. The purpose of a primer is two-fold: first is to check for any surface flaws that might have arisen in assembly, and second is to provide an even base tone for the color to go on to. I recommend a light sanding after the primer coat with very fine sandpaper (1000-grit or finer) to smooth out the finish. 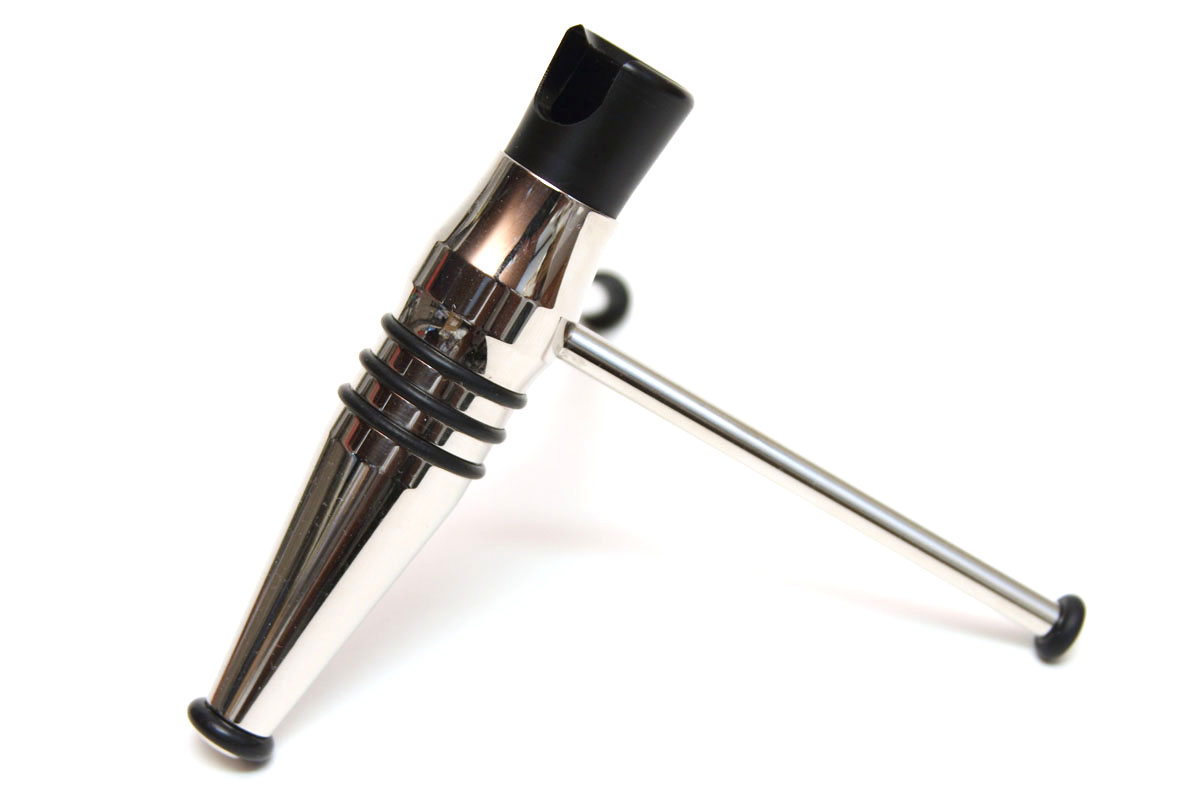 With the model ready, it's time to get the airbrush loaded and ready. As the airbrush used here is a gravity feed airbrush, it is imperative to have a secure stand to hold the brush. The one used here is put out by Harder & Steenbeck and is designed for their brushes. It holds other brands just as well, though. With the brush secured, we can now load it up with paint.

The key to getting a good layer of paint begins with the paint itself. The paint needs to be thoroughly mixed. Invariably this will involve more than just shaking the bottle, as the binder and additives tend to coalesce in the bottom of the container. I recommend getting dedicated stirring sticks for this purpose. These can be simple disposable types, such as bamboo skewers, or reusable types, such as a stainless steel rod. Whatever your choice, be sure to stir completely, and scrape any collections of binder & additives back into the container. After stirring, shake the paint again to get a thorough mixing. 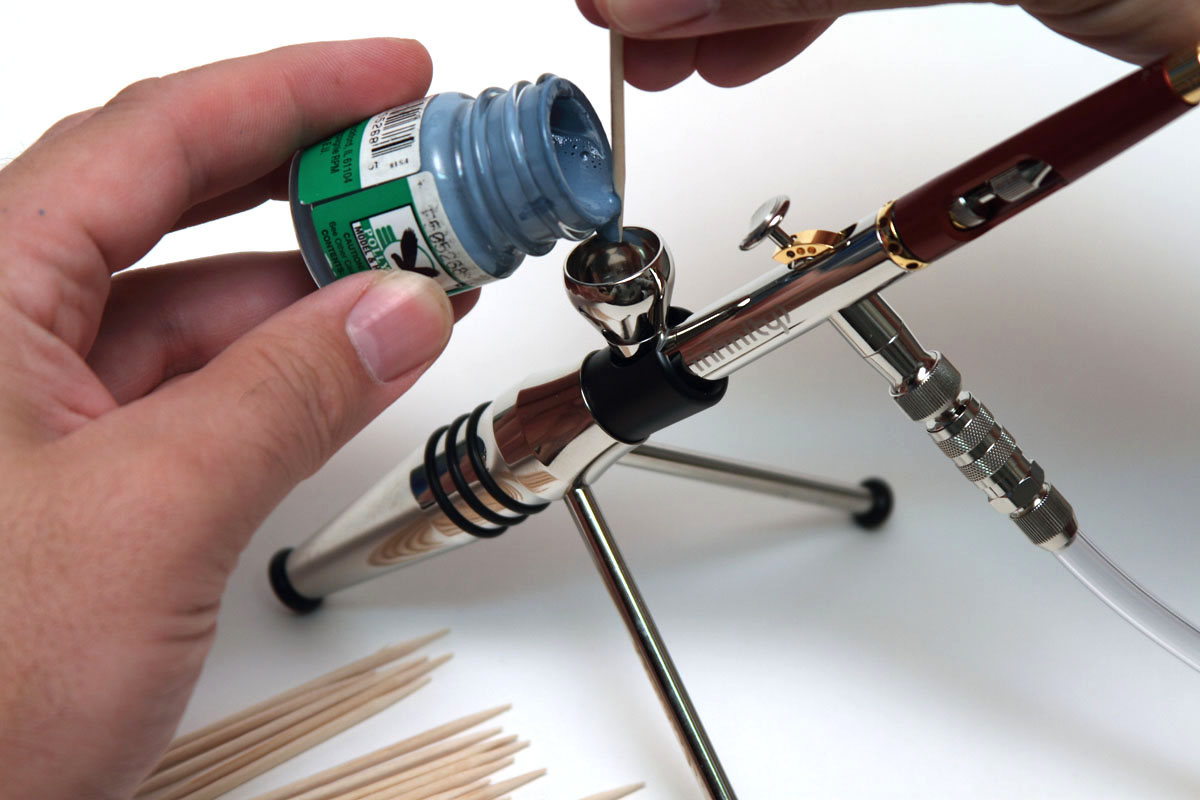 With the paint mixed and ready, it is time to fill the cup. There are many ways to do this, ranging from just pouring straight from the bottle into the cup to carefully measuring paint via an eyedropper. The former method is most common, but can lead to spills. While the latter can be quite useful for obtaining precise mixtures, it is often not necessary for general usage. The method I employ is to pour from the bottle, but utilize a toothpick to minimize spillage. As paint flows out of the bottle, the surface tension tends to keep it connected to a surface. Pouring straight from the bottle, the paint runs down the side of the bottle, rather than dropping into the paint cup. By placing a toothpick on the bottle lip, the paint encounters a new surface and follows it down to the tip, where drops fall straight into the cup. This greatly minimizes spills and reduces the amount of wasted paint that gets wiped off the side of the bottle.

Now most fears with airbrushing comes from the arcane science of proper thinning ratios. Airbrushes need thinned paint in order to spray, or so the theory goes. However, that is not necessarily true. What really takes place is that there is a correlation between paint viscosity and air pressure. Increase the air pressure enough, and you can spray any paint without thinning. On a practical scale, though, modelers should probably limit their air pressures to under 40psi, which for many paints will require some level of thinning. For the Floquil Polly Scale PRU Blue, though, I will be airbrushing without thinning, and will adjust the compressor pressure until I get a good spray.

So the next step is to determine what PSI I can spray this paint at. With a simple compressor such as the Euro-Tec 10A that does not have a storage tank, there will be two pressures that show up on the gauge. The first is the initial pressure. As this is a closed system initially, this pressure is basically the pressure contained in the hose between the airbrush and the regulator. The second pressure is the actual spraying pressure. When you hold down the trigger of the airbrush, the pressure will drop as the system is no longer closed. It is this second pressure that is the actual number you want to look at. So, for example, if you hear a fellow modeler state that he is airbrushing at 22psi, you would dial that in by adjusting your regulator while holding the trigger down on your airbrush. 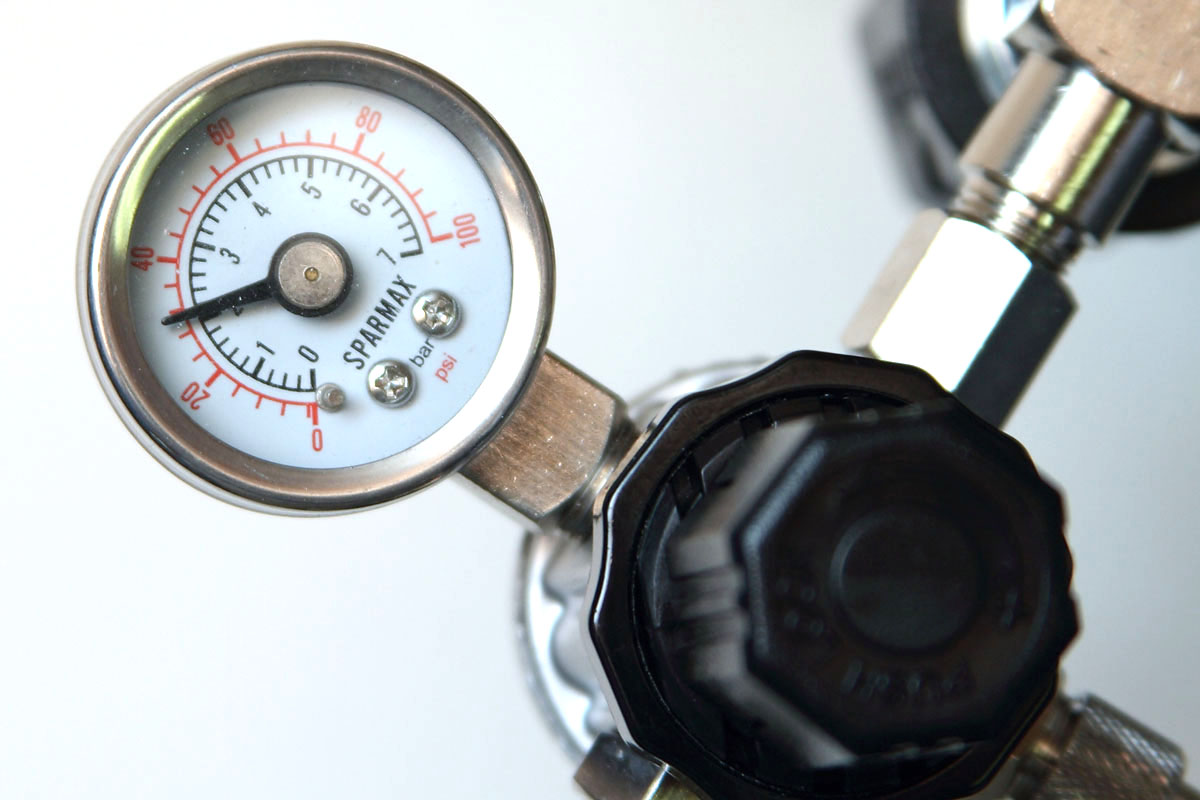 Initial pressure
If you are looking at buying a similar compressor (i.e., one without a tank), I highly recommend trying it out first. Connect your airbrush to the compressor, then run it with the trigger held down and watch the needle on the pressure regulator. If the needle is jiggling, that means that the air going through the compressor is pulsating. This is caused by the piston in the compressor moving at a slower cycle, and it can cause problems in maintaining a consistent airbrush line. This is because the pressure fluctuation translates up to the airbrush, where the paint then pulses out of the brush. A compressor specifically designed for airbrushing can minimize that problem to the point where there is no discernable pulsation. A compressor with a tank does not have this problem, as the compressor simply fills the holding tank and the air is taken from that at a consistent rate. 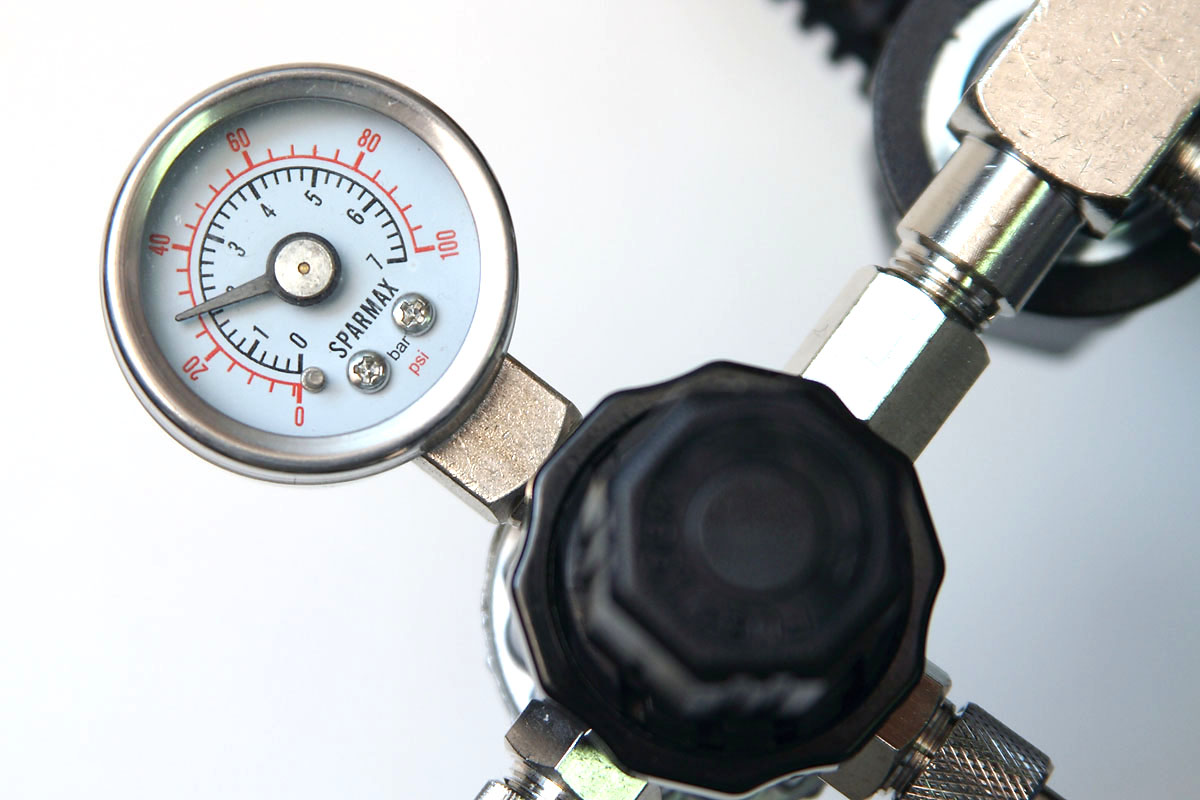 Working pressure
Back to the Polly Scale PRU Blue, I determined that spraying at about 30psi gave me a consistent and even result, unthinned. To give an idea about how environment plays a factor in this, I checked with another modeler living in a different region, with a different environment. They were able to spray Polly Scale paints consistently, unthinned, at only 25psi. This is an important thing to remember: there is no hard rule when it comes to airbrushing. So much of it will depend on variables such as environment, that everything needs to be taken as a guideline. If you want to duplicate the results here, start at 30psi and then adjust the pressure up or down until you get good results. Once you determine that, remember your settings and adjust any future attempts accordingly.

Putting Paint on the Model

With the paint in the brush, and the pressure set accordingly, it's time to start coloring up the model. To keep my hands off the model, I use a handle. For this aircraft, this handle is easy to create, and for propeller aircraft I use a simple round file in the propeller shaft hole. The reason I use a file instead of a stick is that the file is tapered, and it has teeth. So I can simply twist it into place and it holds tight to the model, and a simple reverse twist removes it. 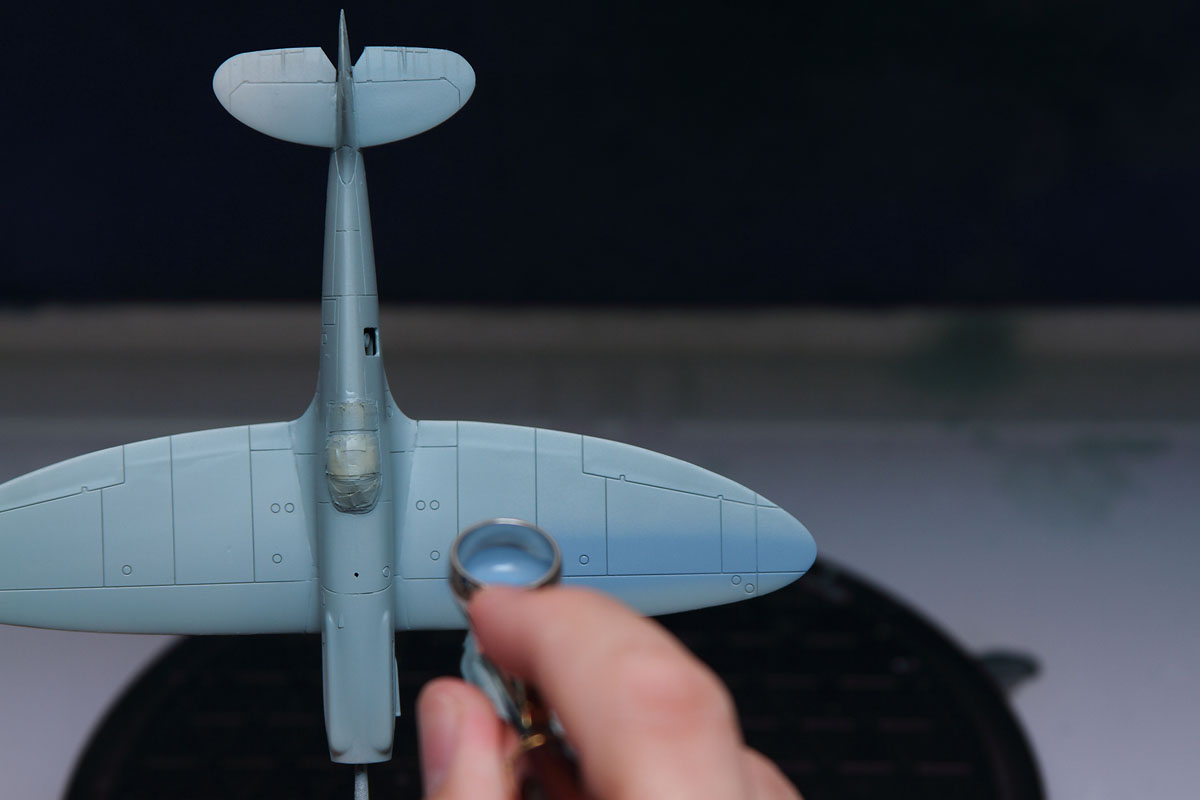 With the handle firmly in place, I start painting. With all airbrushes, whether single-action or double-action, it is best to start your brush stroke away from the model. This allows any buildup on the tip to blow away and lets a good atomization build up before moving onto the plastic. When you do move onto the model, keep the brush moving consistently and smoothly. As you approach the end of your stroke, lift the brush away from the model before releasing the trigger, to avoid any splatter. Spray in one direction, as seen here where I am spraying horizontally along the wing. Once that first coat is down, you can then come back over the first coat with a second coat, this time moving in a different direction. By mixing the directions of painting, you can achieve a solid coat of paint and avoid any odd buildup.

Painting around complex curves, such as the nose of the Spitfire, will generally involve multiple passes from several directions. Be sure to watch where your paint is going, too, as it can be very easy to get a proper distance from what you want to paint, and not realize that you are way too close to another part. This can result in large paint blotches that are a pain to remove. If that does happen, the best course of action is to immediately stop painting and let that wet spot dry thoroughly. Then lightly sand it out and restart the painting process. Attempting to fix it while the paint is still wet will only result in a much bigger problem to fix. 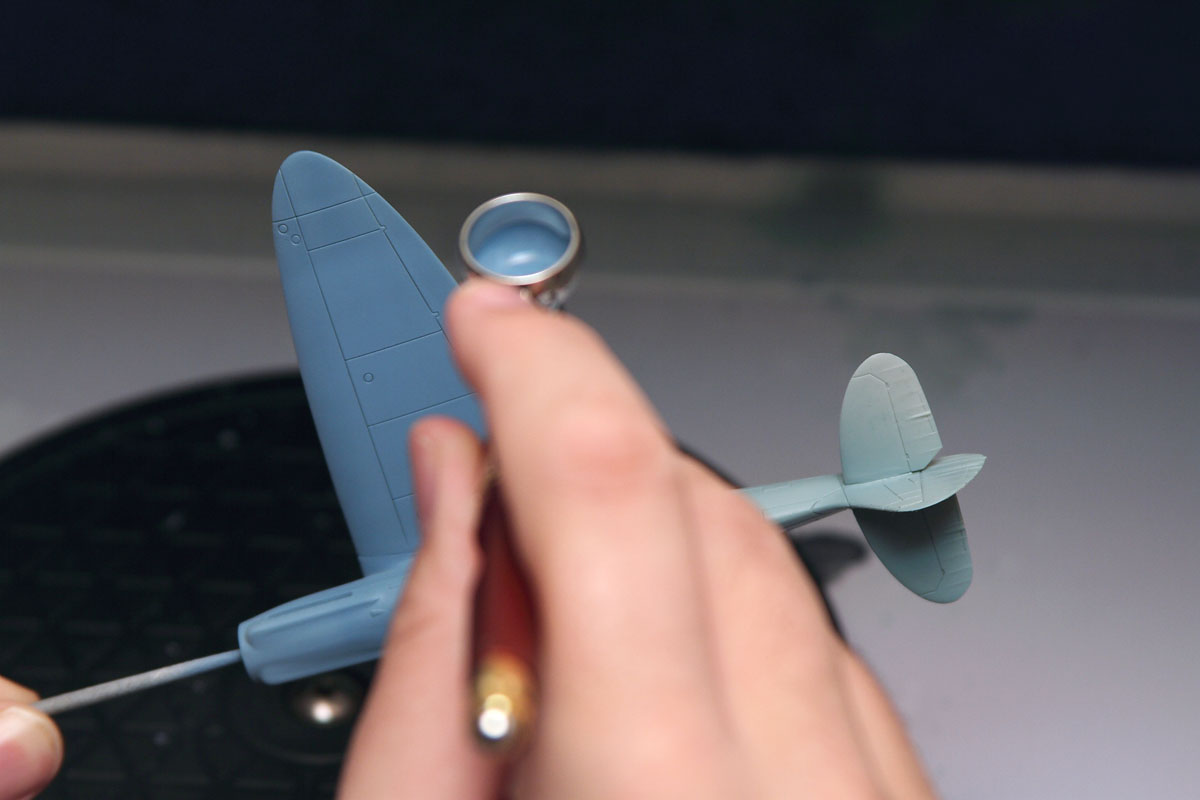 Airbrushing is challenging in that you cannot see the actual spray, just the results. This makes painting in nooks and crannies tough. For example, painting in the wheel wells and inside the radiators of the Spitfire is tough, because there is a great potential for putting a lot of paint where you don't want it. When you reach areas like this, it is best to narrow your spray and do a little bit at a time, rather than putting down a heavy coat. For a single-action airbrush, this will involve dialing down your needle opening. For a double-action airbrush, this is controlled by not pulling back as much on the trigger. 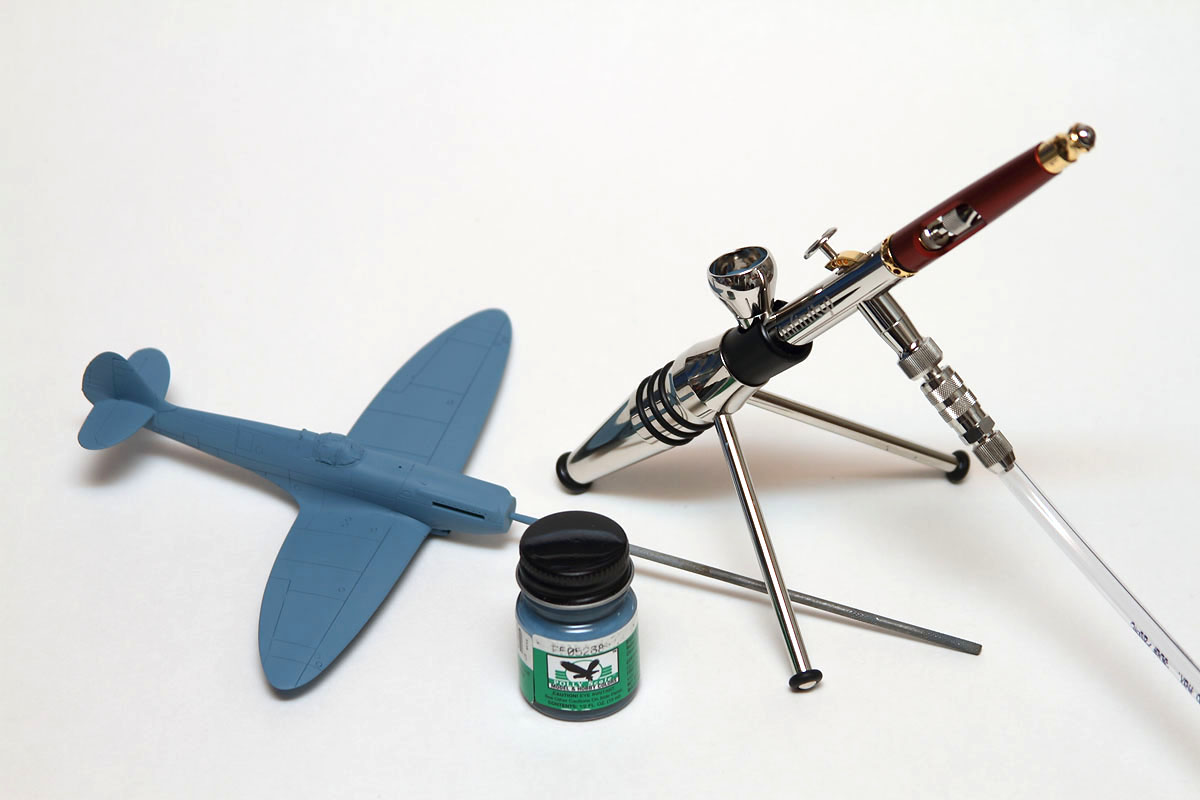 With your first model airbrushed, the next step is to do another couple dozen. Like everything in this hobby, the key is practice, practice, practice, and airbrushing is no exception. I recommend working with solid color subjects in the beginning, as they offer the best subject for practicing. You can experiment with fine fade lines, soft edges, and more, without having to worry about making mistakes because in the end, it'll all get painted solid anyway.

Next week we will look at a different type of paint and how to create hard-lined camouflages.