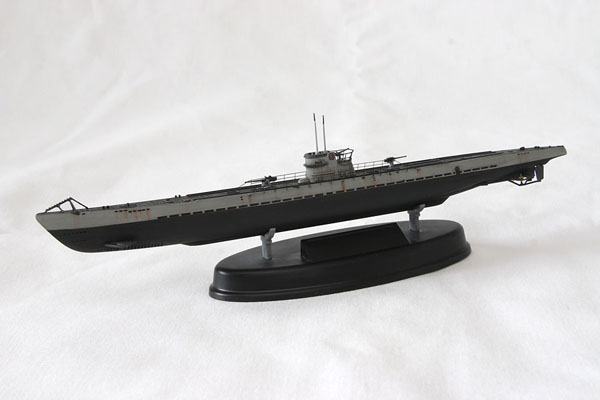 The history of the U-boat is well documented, both in print and on the web. The Type IX was the long-range submarine of the Kriegsmarine, and the Type IXB has the distinction of being the most victorious of all the U-boats. Bronco's model, therefore, holds a special place in submarine modeling. For those interested in knowing the histories of the individual boats, I highly recommend the website uboat.net: The U-boat War 1939-1945. This site has an incredible amount of information on the U-boats of the Second World War, including histories, photos, and technical information. 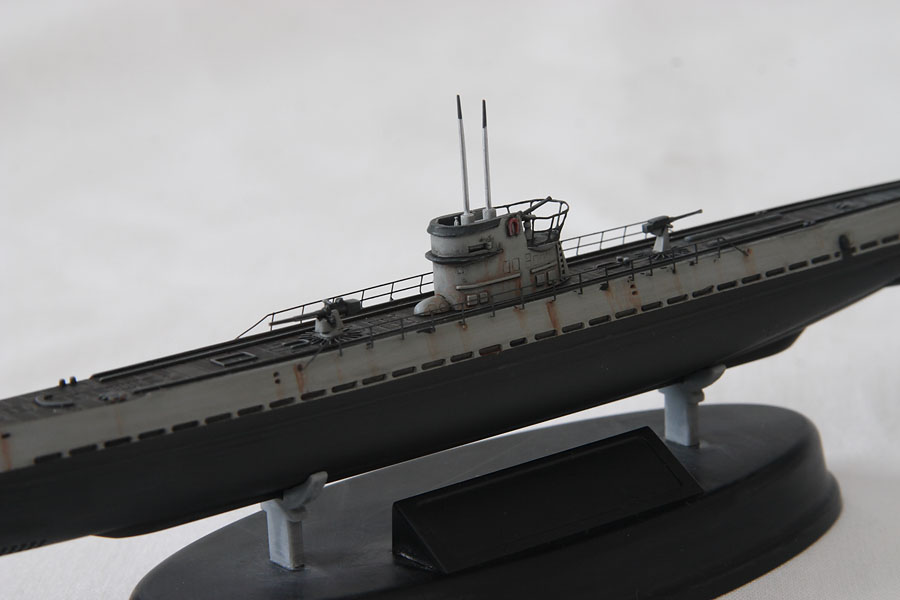 This model is almost entirely a painter's model, as the assembly is quite simple. However, there is one area of contention in assembly that needs a careful hand, and that's in attaching the upper hull to the lower hull. The resultant seam is a challenge to fill, as it comes very close to raised and recessed hull details. And there is no avoiding the seam, as the moldings are slightly rounded at the edges, creating a shallow trench. The best solution was to mask off the detailing and apply layers of Mr. Surfacer until the seam was filled. In looking at my finished model, I can see that I should have done a couple more layers. Ahh, well, something for the next one (and I hope Bronco does a Type IXC with the cut-down deck and enlarged wintergarten). 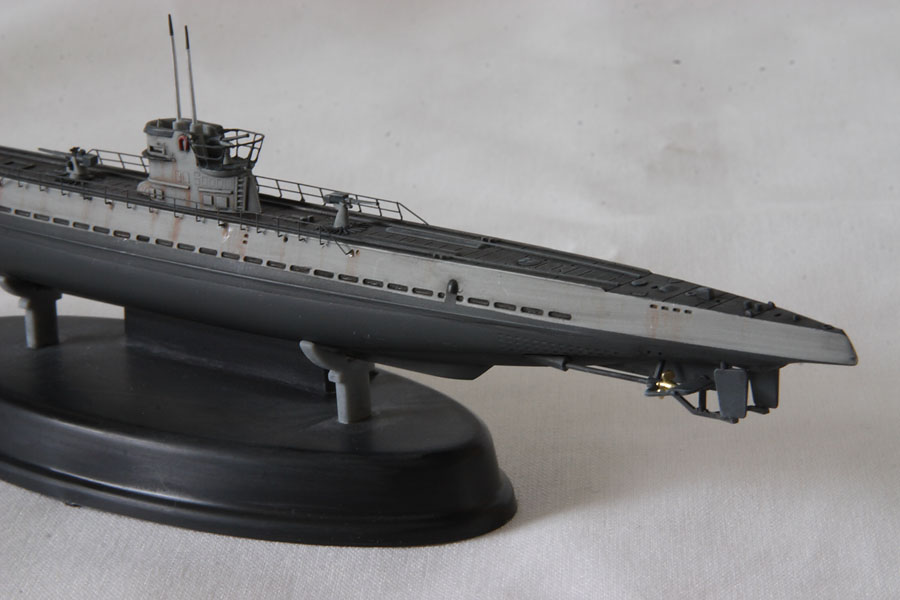 Aside from the main hull, the other fiddly assembly comes with the arrangement for the shafts, rudders, and rear dive planes. This is a fairly complex assembly, made all the more tricky by the small size of all the parts. Just removing some of these finer details from the sprues was challenging, not to mention adding them to the hull. Still, slow going and careful fitting will pay off. I rushed a bit on these, and as a result one side is just a bit out of alignment. I thought about fixing it, but was afraid of completely breaking the parts. Not wanting to attempt to scratch replacements, I'll live with it (and just not photograph it from that angle). 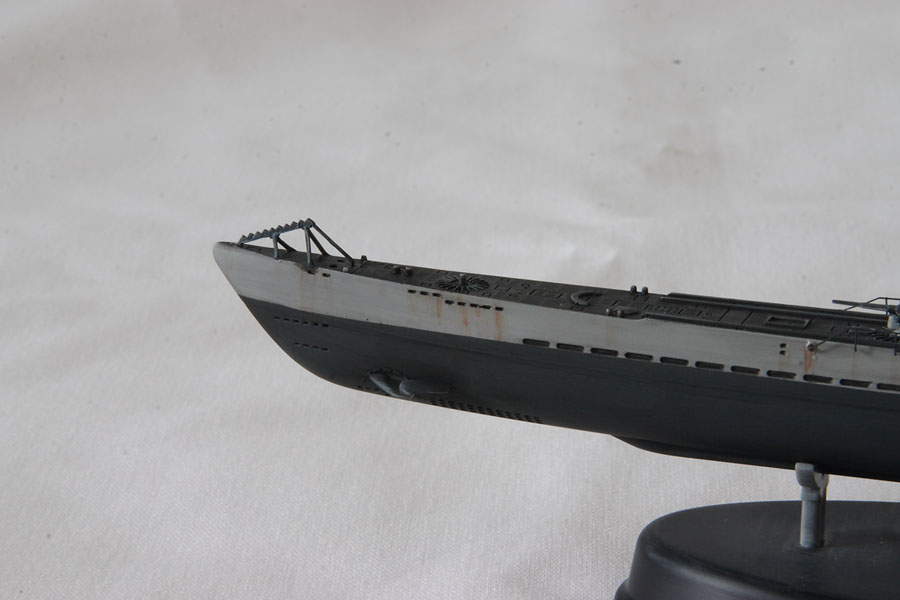 While on the subject of fine details, one of the most challenging pieces to put together was the bow cutter. This is made up of three pieces: the main cutter and two separate V struts. Those V struts are extremely petite, so to remove those from the sprue gates I used my JLC saw (available from UMM-USA; if you don't have one of these yet, get one, it's worth every penny and then some). That allowed me to remove the parts without damaging them at all. After gluing them in place, I filled in the attachment points with Mr. Surfacer and then touched it up with some light sanding with fine grit paper. The remaining parts, such as the deck guns, conning tower, and periscope masts, were cleaned up and set aside for painting. All in all, basic assembly was really only a couple days' worth of work. 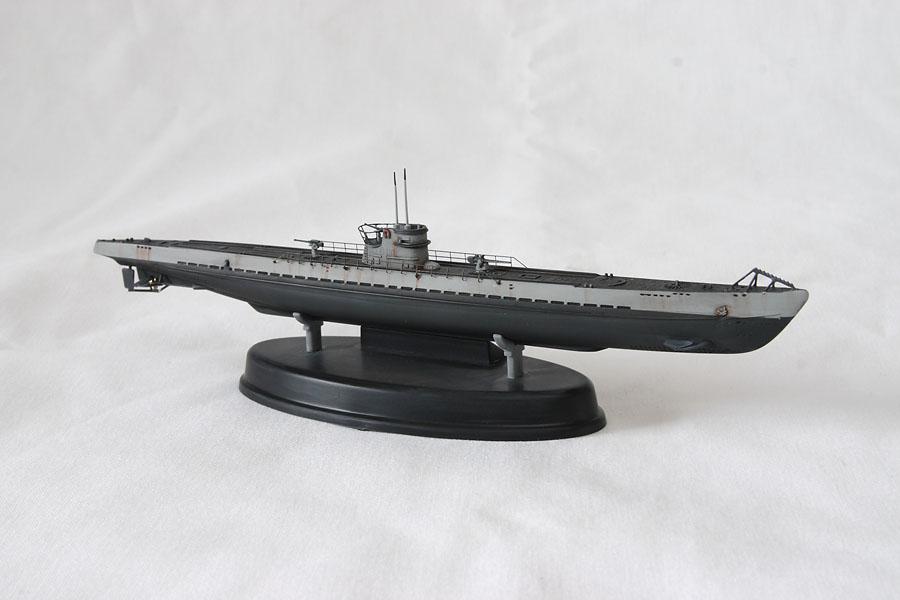 When I had started this model, my initial thoughts as to colors was a gray hull and conning tower, hull red below the waterline, black boot top, and probably a teak deck. That would actually be pretty colorful, and looking at the color work in the Squadron In Action on U-Boats, it seemed to be a valid assumption. However, knowing that sometimes those In Action books are sometimes not quite right with regards to color information, I poked around a bit online to see what the prevailing color theory was on U-boats (the Squadron book dates back to 1977, after all). 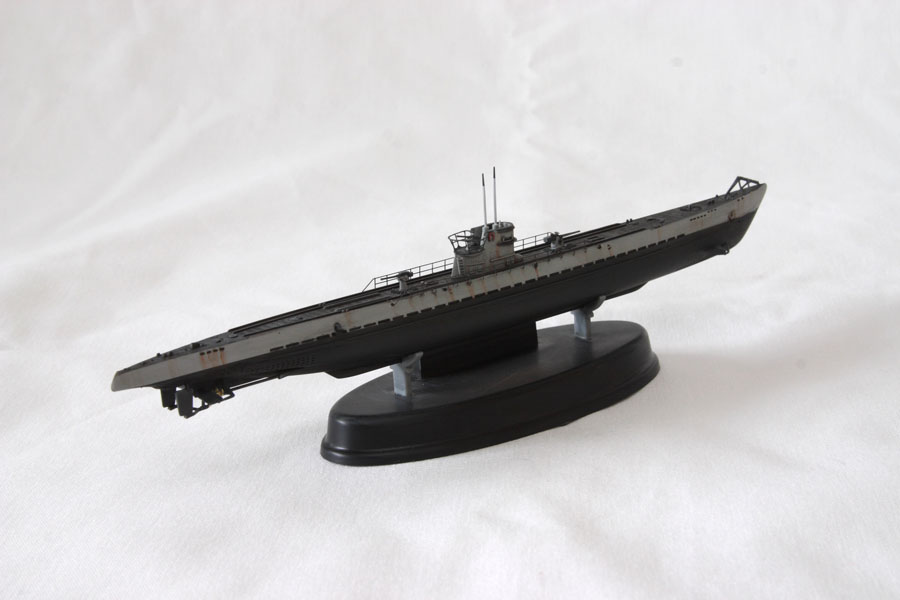 After a bit of searching I came across this document: Kriegsmarine U-Boat Colours & Markings(in PDF format, a PDF reader like Adobe Acrobat is required). The author has done an incredible amount of research on the colors and markings of U-boats, with the result being that my Type IX would basically be two colors: light gray and dark gray/black. So much for a colorful boat. In addition to detailed information on the colors used, this document also covered another big area of interest: that of weathering. Knowing how the ship looked in basic colors was only the first part in finishing this model, and the information on the weathering was highly welcome. 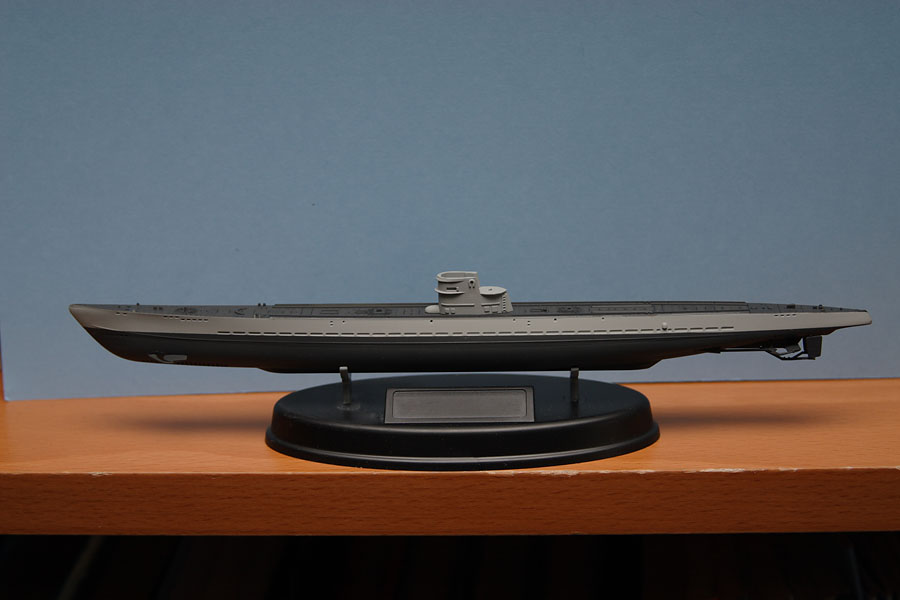 So, with that information in hand, the first step was to paint the basic colors. I left the conning tower off to aid in finishing (indeed, the fit is so snug that it is not even glued down on the finished model). I used Floquil railroad colors, with Grimy Black for the dark gray and Milwaukee Road Gray for the light gray. These two shades gave a very close representation to the colors outlined in the Colours & Markings document. The deck is dark gray because it was not teak, which was in scarce supply. Since they used local wood for the deck, they painted it to protect it from damage. 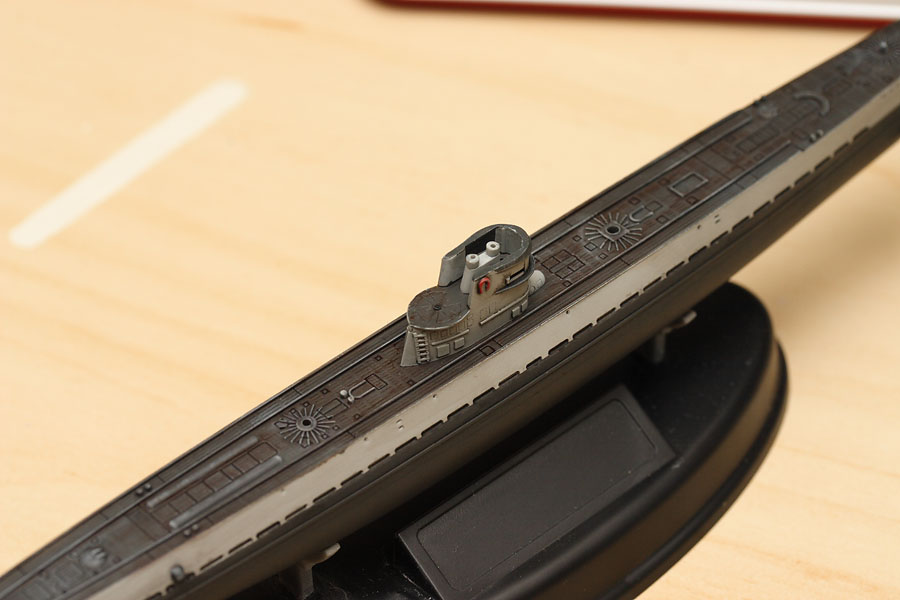 With the basic colors on, the next step was the initial weathering. I started with the deck. Now, while I said that the deck was painted, it also wore down in the high traffic areas, revealing the underlying wood. My initial thoughts on how to replicate this was to use oil paints and apply a wash of brown, thicker than my usual wash I use for accenting recessed details but still thin enough to be somewhat translucent. After accompanying the spouse to the local scrapbook store (you'd be amazed at what you can find there!), I came home with something that showed promise: Copic pens. These are alcohol-based ink pens that have two tips on one pen (at least in the version I picked up). In addition to the ink pen, I also picked up a blender pen. 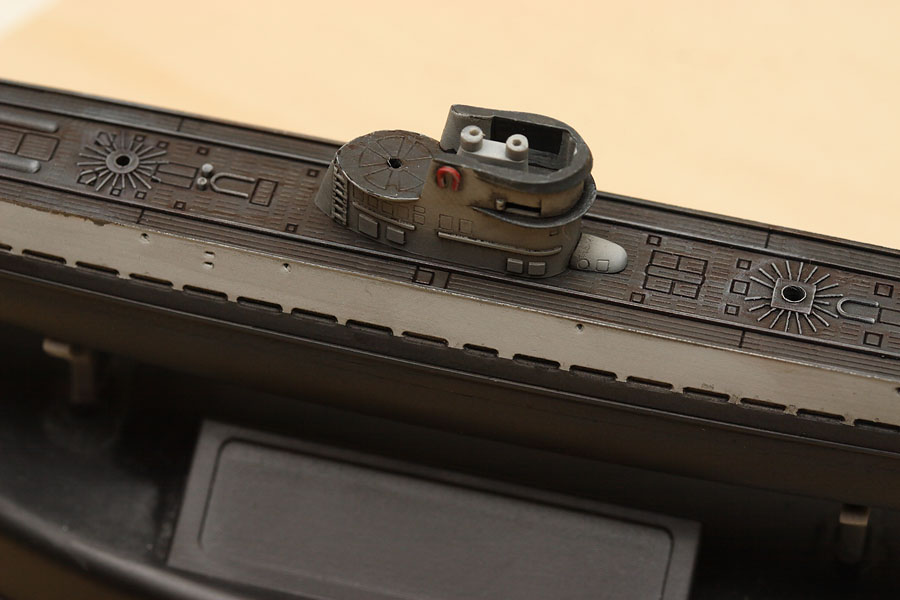 So, how do these pens work? Well, it couldn't be simpler. I just used the fine tip of the Burnt Umber pen (there's something like 200+ colors available in the Copic line) and drew some lines on the top of the deck. The ink dried instantly; by the time I took the pen off and moved my finger to see if it would smear, it was already dry. So my thoughts of smearing it after application were dashed. Enter the blender pen. With the blender pen, I started rubbing over the lines. The ink immediately reconstituted and I was able to blend it around, taking a solid ink line and turning it into a translucent wash. The more I used the blender, the thinner the wash became. After a bit of practice, I was able to exert precise control over the amount of blending, and as soon as I took the blender pen away, the ink once again dried instantly. 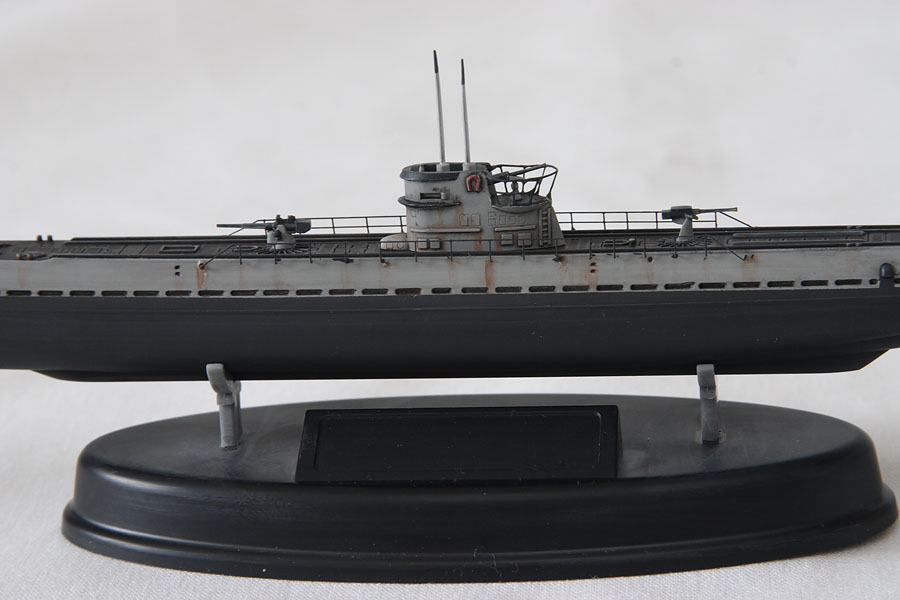 The deck looked great, but that was a dark brown on a dark gray surface. I thought I would try this next on some rust on the side of the hull, on the light gray portion. Here the fine tip really paid off. I drew a fine line with the Burnt Umber, then used the blender pen to run that down from the vent hole. On the finished model, some of the rust is from the Copic marker, and some is from my bottle of RustAll. After using these markers, I don't think I'll be using the RustAll on my ships any more, as the level of control given by these markers is significantly greater than anything else I've tried. 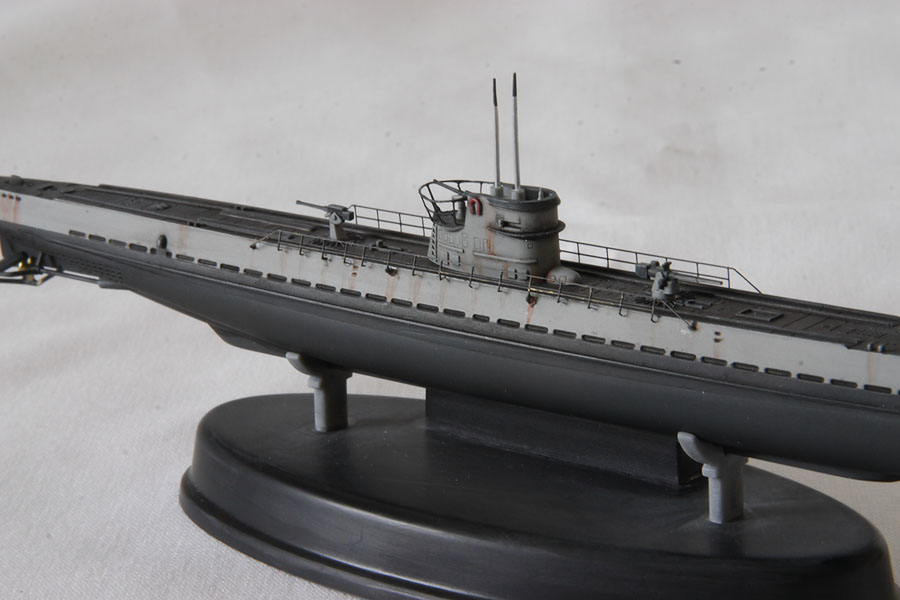 There are some other benefits to these markers. Firstly, they are refillable. So, while they are a bit pricey, being able to refill them means that you can use the same marker for years and years. As a secondary benefit along the same line, you can buy empty markers and mix the inks to get custom colors. So if one of the 200+ colors doesn't match what you need, start mixing and matching until you get that exact shade you need. There is a downside, though: the lighter colors are translucent. I picked up a light green that I had hoped to use on the scumline on this sub, but it all but disappeared on the dark gray, even before trying to blend it in. For the darker colors like Burnt Umber or any one of the dark grays/blacks, it should be no problem, and if you're using the lighter colors on a light-colored model, you will get some great effects. Just stay away from using light colors on dark models.

Oh, and another bit of warning: it doesn't take long for these pens to become rather fun to use. So be forewarned, you might end up pulling down a bunch of your finished models and adding more weathering to them. 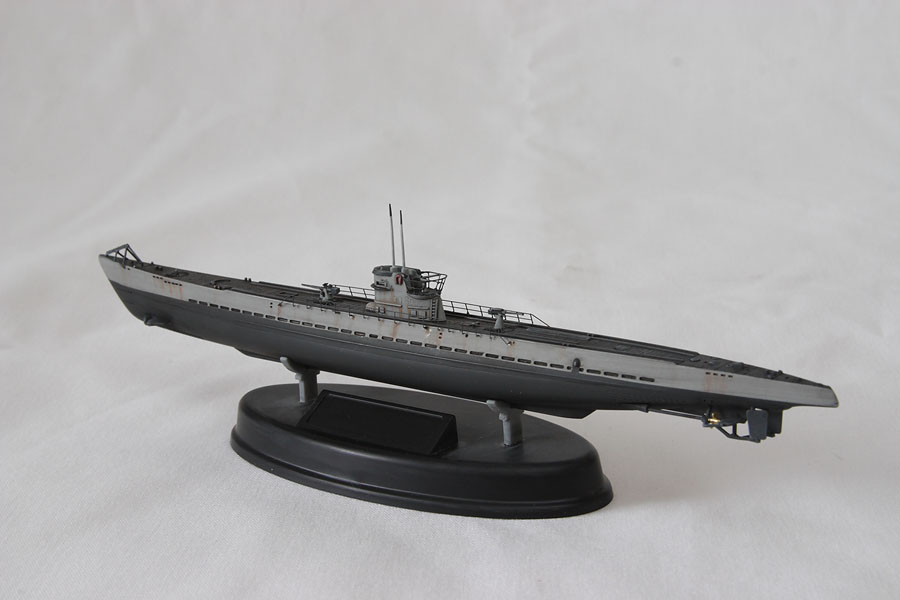 With the main assemblies painted, stained, inked, and drybrushed, the next step was the finer details. The deck guns were painted up, with the fore gun having the top half painted dark gray as some U-boats had (that was a challenge to do!). All the guns received some drybrushing to bring out the detail, then attached in their respective locations. The main hull railings (two styles are included in the kit; I chose the full railings) were attached, with some additional hull rust stains running from the stanchion attachment points. 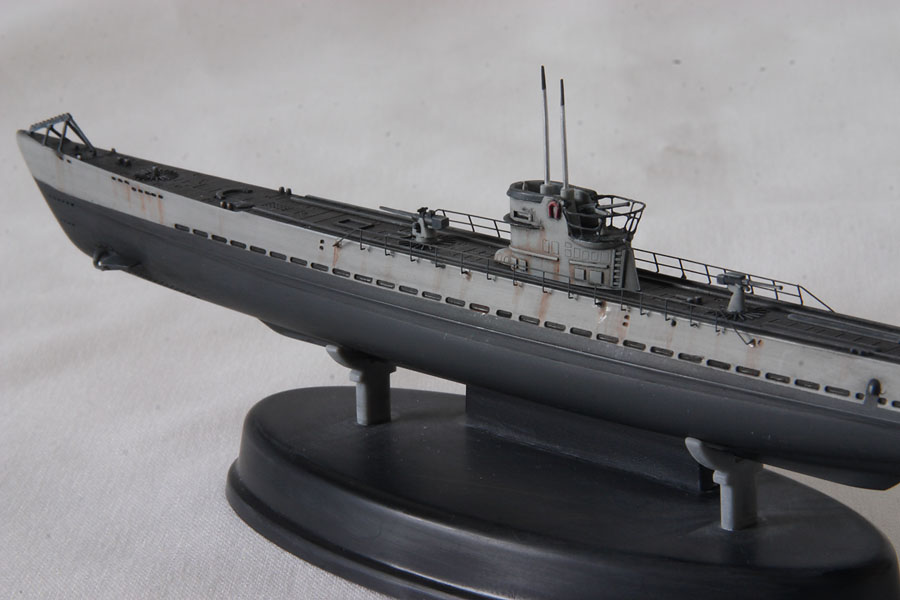 For the conning tower, I returned to the U-boat Colours & Markings document and started adding details. Well, painted details, as I wasn't about to try to add all the various bits and pieces, not in this scale. I painted portions of the inside dark gray to simulate the wood ‘padding' applied to the inside edges, which kept the crew from freezing to the metal. The periscopes I gouged trying to remove from the sprue, so those were replaced with plastic rod suitably shaped. 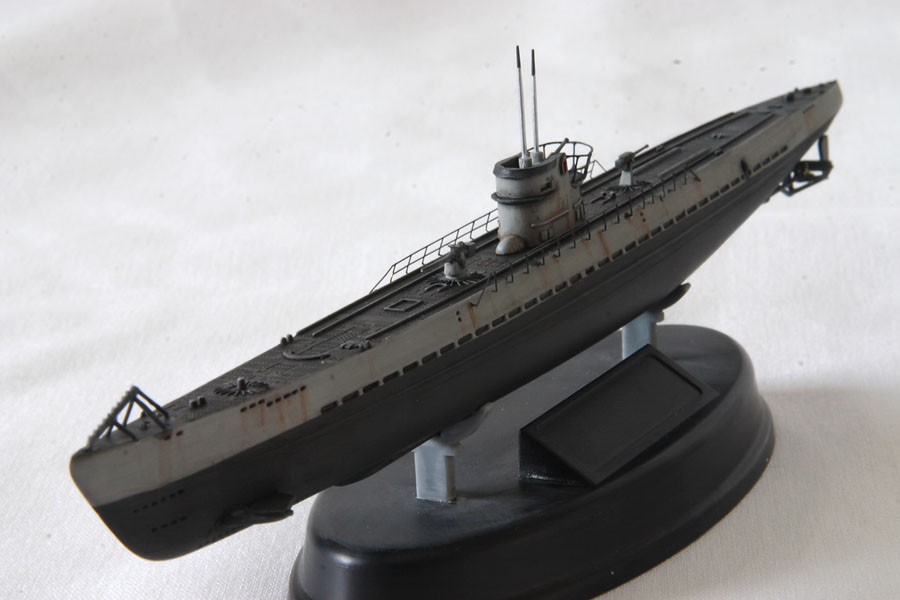 Attaching the photoetch railing around the wintergarten was probably the most challenging photoetch I've had to work with yet. A truncated cone, not only did I have to roll this in a circular shape, but I had to bend the stanchions in at the proper angle to get everything to line up right. The attachment points were nothing more than the ends of the stanchions, which was not easy to work with. On the fourth try I finally got it on, but it's not entirely even and looks quite a bit clunkier than the hull railings. I'll have to rethink how to do that for my next U-boat. The only step left is the rigging, and as I have misplaced my Lycra thread, that is waiting until that spool resurfaces.

Overall, the Bronco Type IX U-boat is a fun build, with just enough challenges to keep it interesting, without being overwhelming. I look forward to seeing future Bronco submarine kits, and I hope they decide to tackle some of the post-war boats as well. I would be really happy to see a line of 1/350 US SSBNs, or some of the last diesel boats. My thanks to Stevens Internationalfor the review kit.