This is the first of several conversions I will be doing using the Tamiya 1/700 Gato class Submarine. After WWII, the Navy found itself with quite a few Gato,Balao, and Tench class submarines. Many more than was needed, or could be manned with the reduced manpower of the post-war Navy. Sooooo.... off to mothballs they went. Or so it seemed at the time. Flash forward a few years, and we find the "Cold-War" starting in ernest. Now the USN finds itself trying to contain the Soviet Navy which has now undergone a serious increase. There was no way with the budgets at the time all new boats would be built, hence the Navy came up with the "Guppy" improvement program. 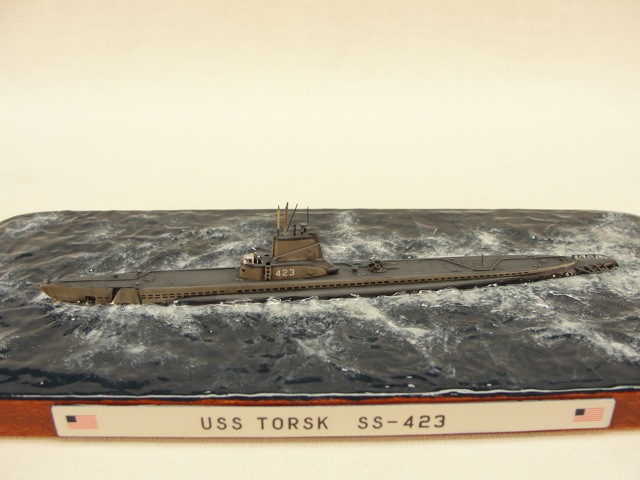 To make a very long story short...... The Navy modified the boats they had active and some from the mothball fleet to modernize them in an effort to contain the Soviet Fleet. Entire books have been written on this subject, so I will not attempt to review it all here. Suffice it to say, the Navy modified the boats, as their budget allowed, and as new configurations were designed and tried. Essentially the "Guppy" program, (Greater Underwater Propulsion) stripped the boats of topside features that made noise and slowed them down. The conning towers were redesigned (at least 4 mods I've found) and became sails, the guns were eventually removed,and several domes were added for better sonar, etc.  Obviously quite a bit was modified internally, such as type and number of batteries, larger and relocated sonar rooms, etc. But again, this is way too much for a small modeling article. The reader is advised to perhaps read "Submarines of the US Navy" by Stefan Terzibaschitsch.(Arms and Armor Press, 1991) This is one of the most informative books I've found on the subject.

Eventually there were various conversions accomplished to these boats which changed them quite radically in some cases. These boats and their crews would "Hold the line" for the Navy, while the new nuke boats were being designed and built. It started out with the fleet snorkel mod. (This was adapted after tests on captured German Type XXI's post war.) Later it would progress to the Guppy I, II, and III mods, along with several sub-variations. In some cases, for instance a boat with the "Atlantic Sail and Guppy III" mod they were quite unrecognizable as the original craft. Sooooo... now that I've bored you to tears,what has this to do with modeling, you ask ?  Now comes the fun. 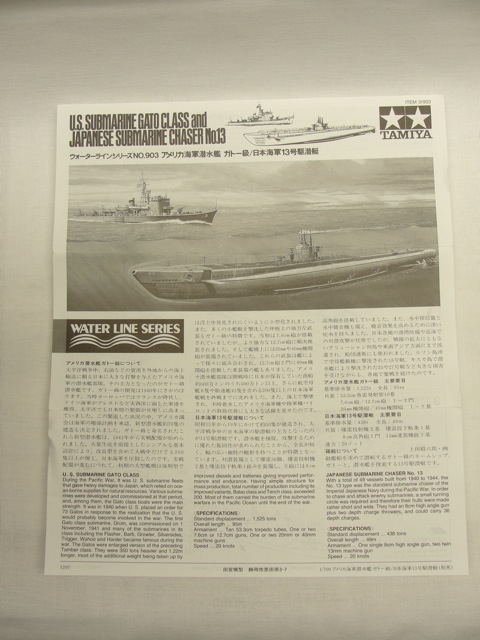 Many moons ago, Tamiya came out with a kit of the Gato Submarine in 1/700 scale. It was quite novel at the time. It also had a 1/700 B-24, as well as a Japanese Patrol Boat. The real novel item at the time was the fact you got 2 complete kits for your money. Even today, these kits can be picked up at an extremely attractive price in some shops, and definitely on E-Bay. Trust me, I'm still picking them up....way too many mods to let this opportunity pass. It also was novel in that it could be built as a waterline or a full hull example. In my opinion these kits have more than stood the test of time. Granted today we have Gato examples in 1/72, 1/144, and now AFV just released a 1/350 example injection molded kit. Obviously the newer kits have more detail, and with that comes a much higher initial cost. Since I'm cheap, I go with the earlier kit that I get quite less expensive. This way, if I mess up a conversion build, at least I don't feel I just threw out a bunch of cash. And besides that, it really is pure fun! 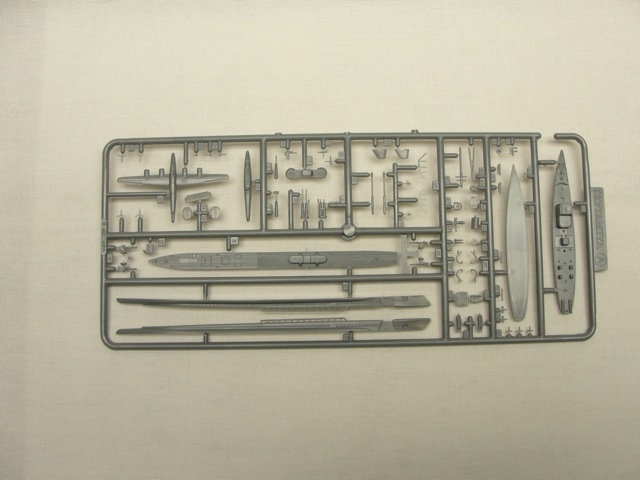 You'll see what comes in the kit in the picture below. While it may not be up to today's standard, it is doable. I decided early I wanted to do one of the earliest conversions for my first experiment. I found a tremendous research site at guppysubmarinetribute.homestead.com, a great site with a wealth of information. I also found some great photos of the USS Torsk from 1952. At this time, the Torsk had been modified with a Portsmouth sail, the forward guns were removed, but the aft gun was left. This was classified as the "Gunslinger" mod. The Navy wanted to see if the aft gun could still be kept for gunfire support. (Later it would be removed entirely) The Portsmouth sail was just that, a new high speed sail designed at Portsmouth Naval Shipyard. Also a little later, The Electric Boat sail was designed at the Electric boat yard . The later , and much higher "Atlantic" sail was a later Naval design which was quite a bit taller and longer. Plus the later mods were also the Radar picket boats. So as you can see, there is plenty of room for conversions here. 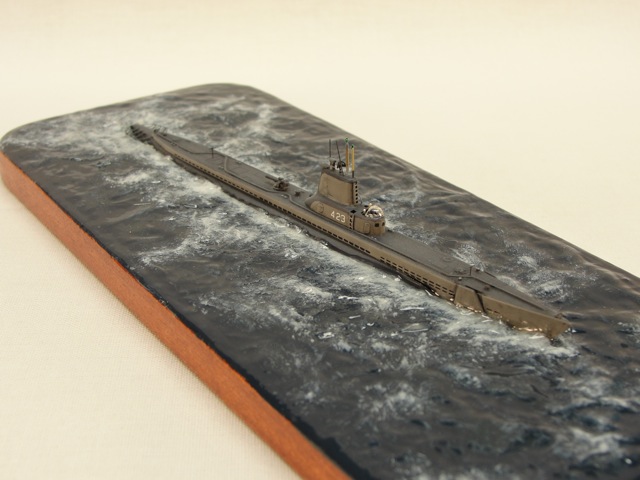 One note here about the Boats. The Gato class boats were generally not used for these mods except in a few cases due to their "Thin Skins". The follow on Balao class were extensively used as was the Tench class. The Balao was essentially a Gato with thicker hull skin, and uprated engines. The Tench class was slightly longer, with a different internal layout, and again uprated powerplants. But for MY purposes, in 1/700 scale, I'm not about to worry about the differences. I am not a rivet counter, never have been, never will be. So I'm sure there are some modelers out there that consider this totally wrong. More power to them. As far as I'm concerned,this hull can be used for quite a few mods which will provide the modeler with a unique collection of the old "Silent Service" days ! 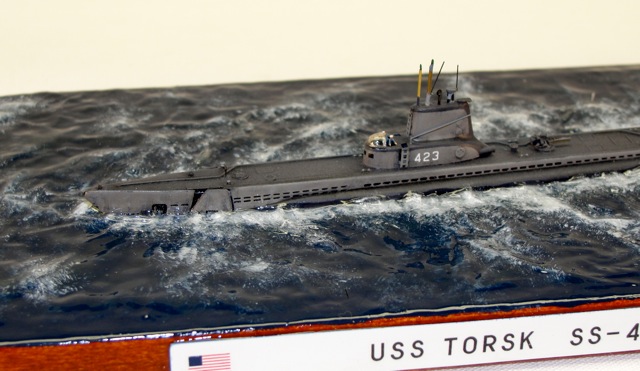 To start, I cleaned off the molded in stanchions and rails, these are normally only seen in port. The conning tower base was cut down on the forward and aft end, this was to act as a base for the new Portsmouth sail. The safety rail was laid out and glued on using Plastruck .010 plastic rod. I already had some of Tom's Modelworks 1/700 PE for submarines, so I decided to use the screw guards, as these were left on the early Boat mods. All anchor holes for the jackstays were filled in. The anchor well on the starboard side was filled in, as the Torsk only had one well on the port side used. The forward dive  planes were thinned considerably and mounted in the retracted position, as seen normally on the surface. 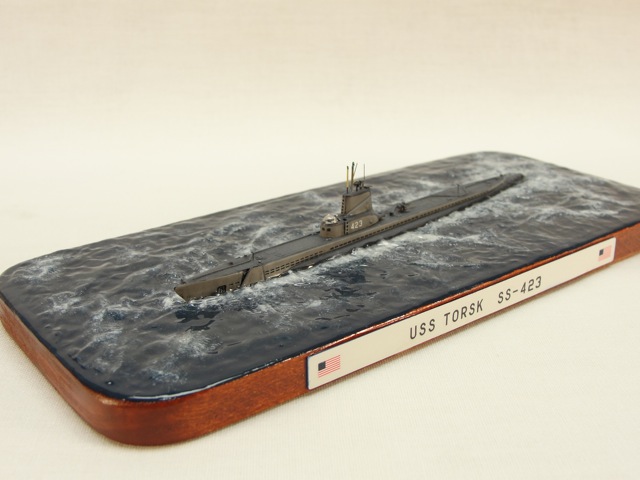 Now came the fun time, scratchbuilding the new Portsmouth Sail. I'll be the first to tell you this is neither perfect or exact. I found a rough drawing in some old modeling magazines, and studied as many photos as I could find. There were several unique features about this early Portsmouth Sail. The "Fast-back" style first attracted me, as well as the paint job, the grey on grey/black. This was built up out of 20 thou plastic sheet, and used the original tower base as an anchor to slide the new assembly over. Another unique feature of this mod was the plastic shield mounted on the front of the sail to protect the topside crew from rough seas. This was made from clear sheet plastic using the "heat and smash" method. The sail mounted masts are another can of worms. If you study time period photos, it seems each boat had a different set mounted. Admittedly this was due to the Navy trying different systems in combination, and the ever present budget problems. The snorkel is the aft most and largest, which I mounted almost fully retracted. The ready ammo container also had to be mounted on the after part of the sail, this was made from plastic rod. 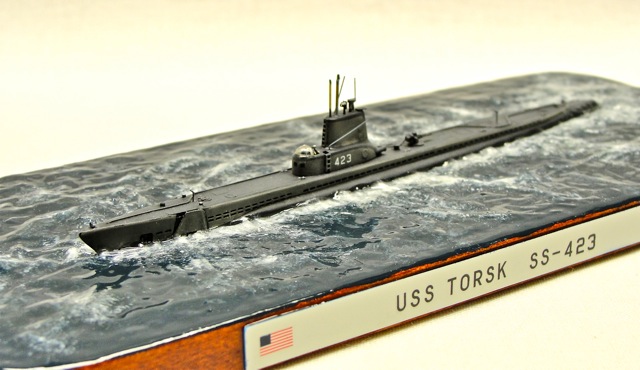 For the paint scheme, I previously mentioned the multiple gray/black attracted me. From most of the photos I've studied, it seems this was used mostly in the Pacific, with pure black used in the Atlantic ? Perhaps some of the Sub crews reading this could shed some light on this. I had already determined I wanted to show the Boat surfaced, and waterlined. For this, I used my usual method of kitchen foil crumpled up as a base. I then painted dark blue base, later highlighted with intermediate blue. Several coats of mod-podge were put on and allowed to dry fully. I then added more light blue highlights, plus drybrushing with pure white for the tops and wake. The "Water" was also given a final coat of Future wax as a gloss coat. 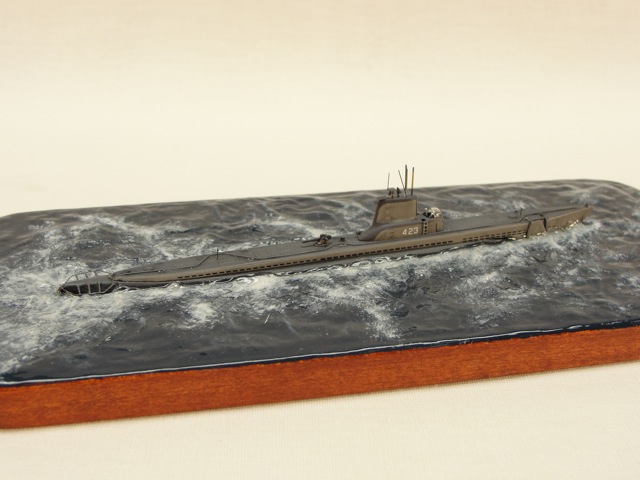 That's it for this project. Not a perfect one by any means, but really a fun project. It really acted as a "Relief" from my serious modeling and obviously was quite cheap to accomplish. Being in 1/700 scale, it sure doesn't suck up a bunch of display area, but is something different for the case.

Any and all comments are welcomed, "till next time ..... 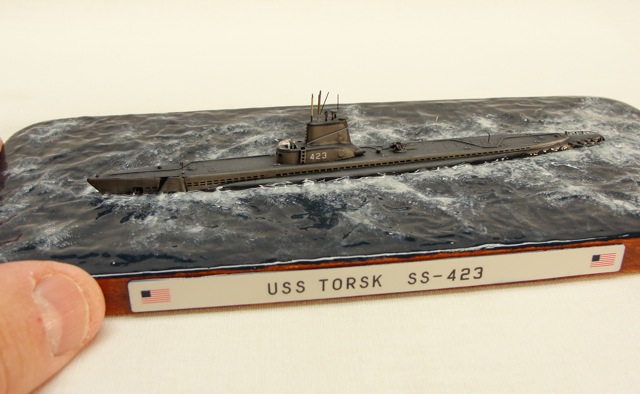