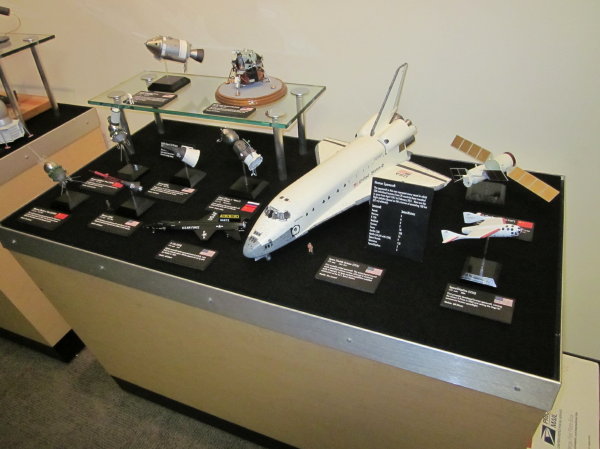 The NorthWest Scale Modelers (NWSM) club has partnered for close to 20 years with the Museum of Flight (MoF) in Seattle.  NWSM - the majority of whose "members" are also IPMS/Seattle members - puts on an annual model show in exchange for use of a room for its monthly meetings.  In recent years, that fruitful collaboration has expanded to include a full time presence in the MoF, featuring quarterly themed model displays near the entrance to the Personal Courage Wing.

Stephen Tontoni has been the primary ringleader of these displays, which are always planned in advance in cooperation with the MoF.  IPMS/Seattle members have also been key contributors to the exhibitions, which since 2006 have included:

With April 12, 2011 marking the 50th anniversary of Yuri Gagarin's flight aboard Vostok 1, the first human spaceflight, Ron Hobbs of the MoF asked NWSM to stage a display commemorating the event and its aftermath.  Stephen approached me to organize the display.  Planning and recruiting began in early 2010 and the display was installed on February, 3, 2011. 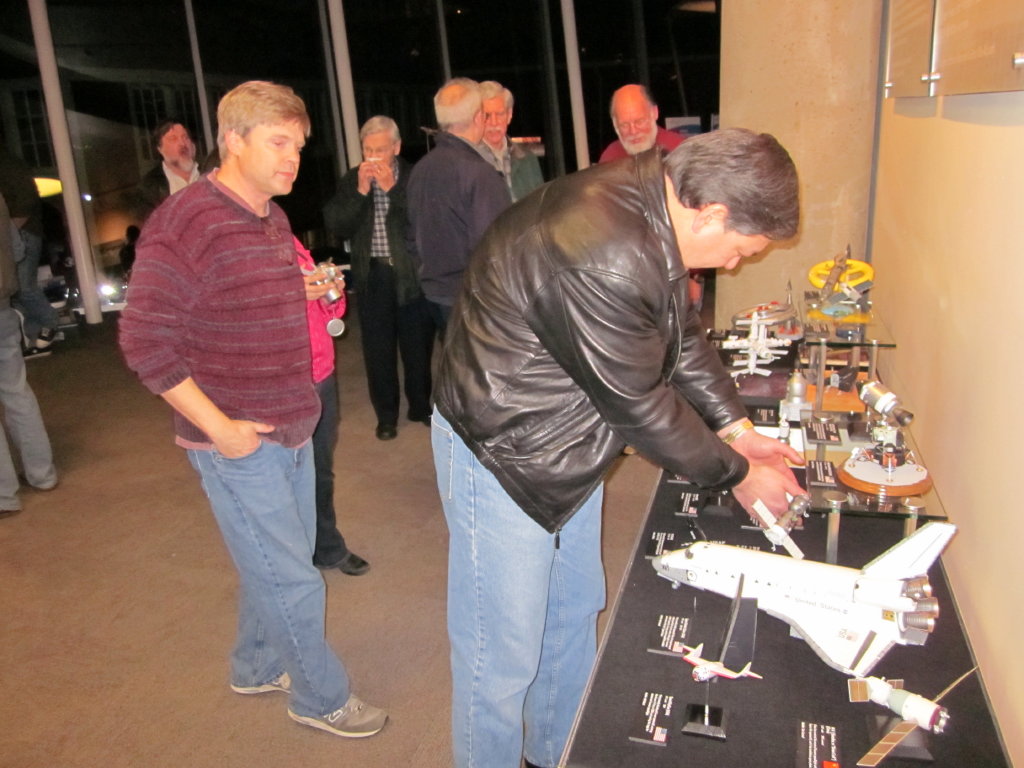 From the beginning, it seemed appropriate and more important - really cool - to include models of every flown human spacecraft in a common scale.  1/72 was really the only choice there, driven by the very large space shuttle orbiter.  This collection turned out as planned - really cool - and fills one of the two display cases.  It consists of the following models: 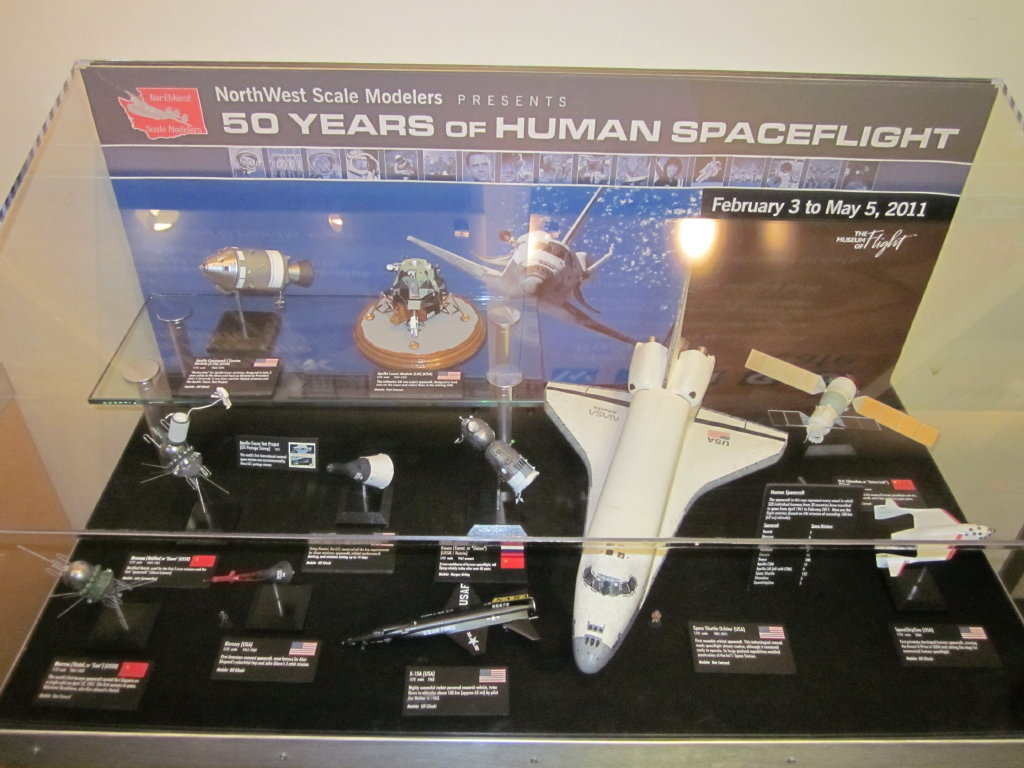 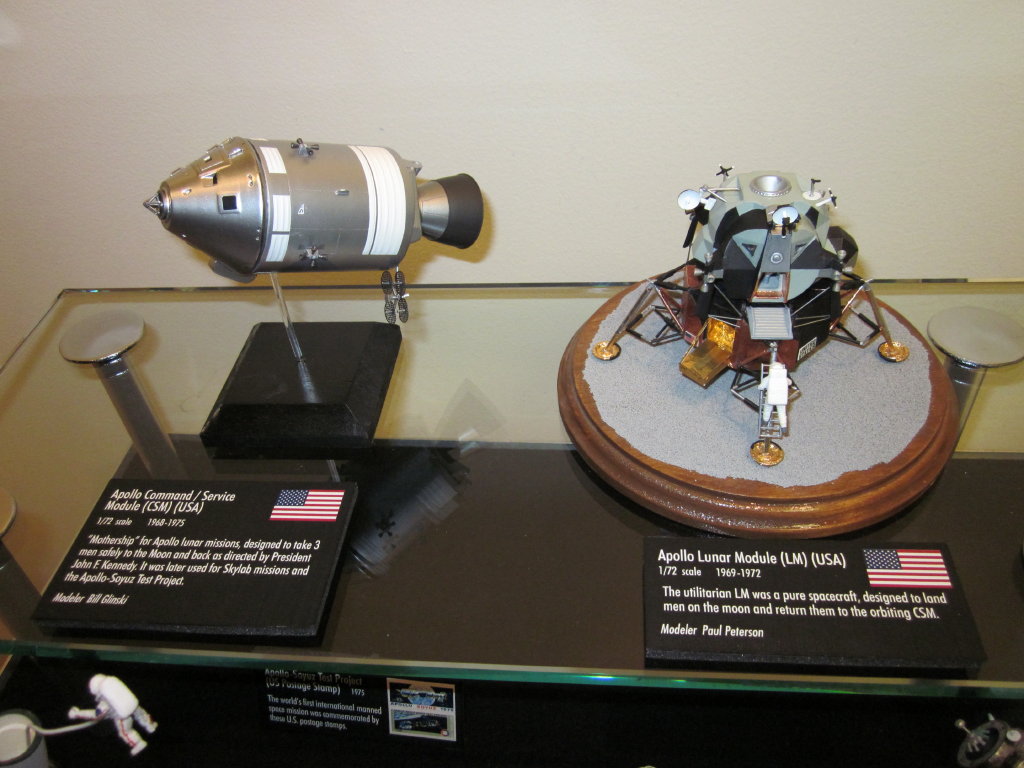 The human spaceflight story is more than just these spacecraft, however.  The visions of people like Robert Goddard, Wernher von Braun, Willy Ley, Chesley Bonestell, and others are represented by a diverse collection of rockets, space stations, and other varied vehicles in (and above!) the other display case.  This collection consists of the following models: 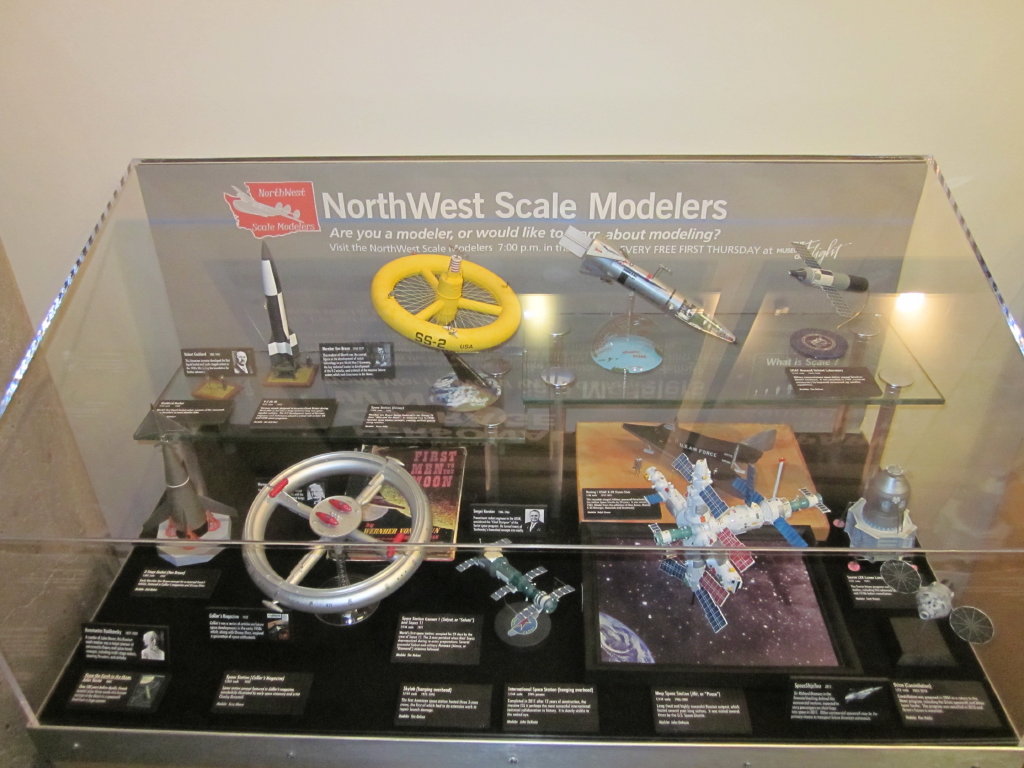 Early rocketry, space stations of fiction and fact, and other projects share a display case 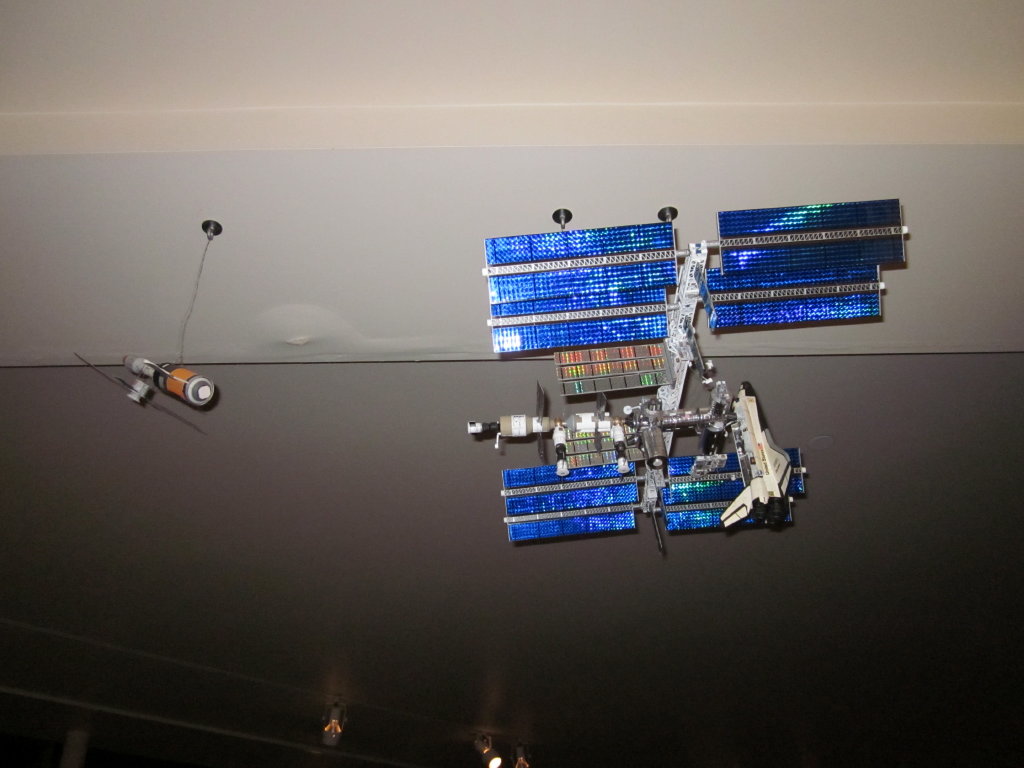 Skylab and the International Space Station, both in 1/144 scale, fly in formation

Thanks to all of the modelers whose hard work made this display a success.  Bill Glinski in particular, did yeoman work to build 5 models specifically for this display.  Working with the MoF, hanging models have become a recent enhancement to these displays; what more can be said about John DeRosia's spectacular ISS? (Quite a bit, as it turns out - see John's article that will accompany this one in due course.)  It was a treat to have the MoF's own Ron Hobbs contribute a model. 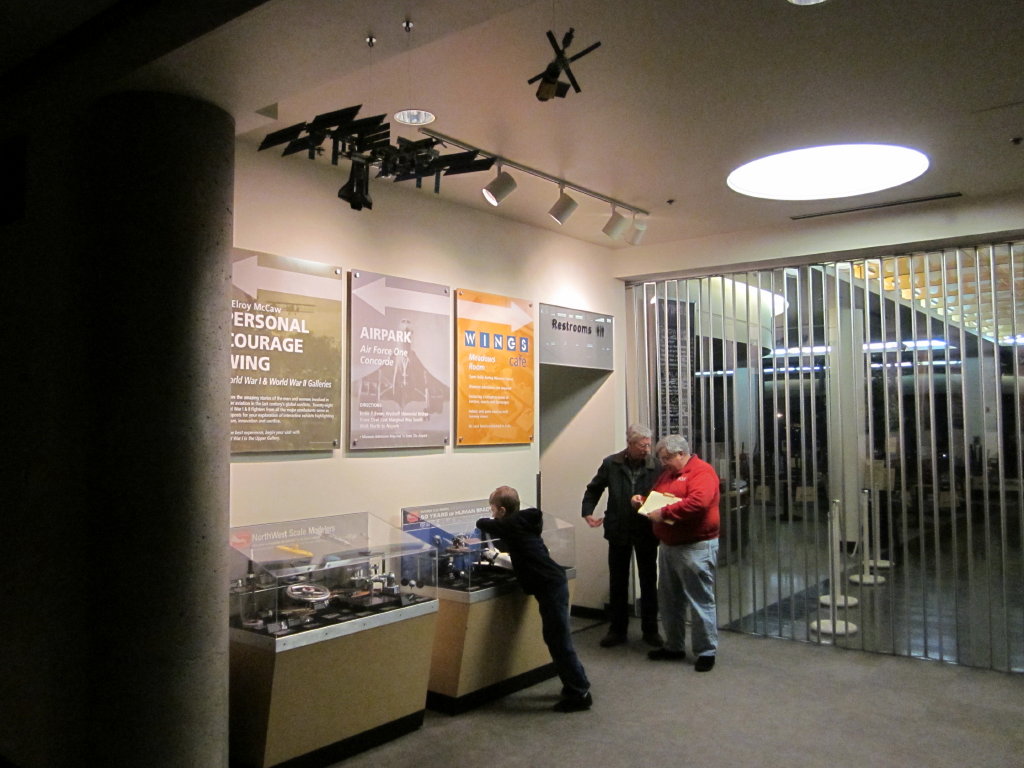 The human spaceflight display, located at the crossroads of the Museum of Flight

You have until May 5, 2011 - the 50th anniversary of Alan Shepard's 15 minute sub-orbital flight aboard "Freedom 7", as it turns out - to come enjoy this exhibit. 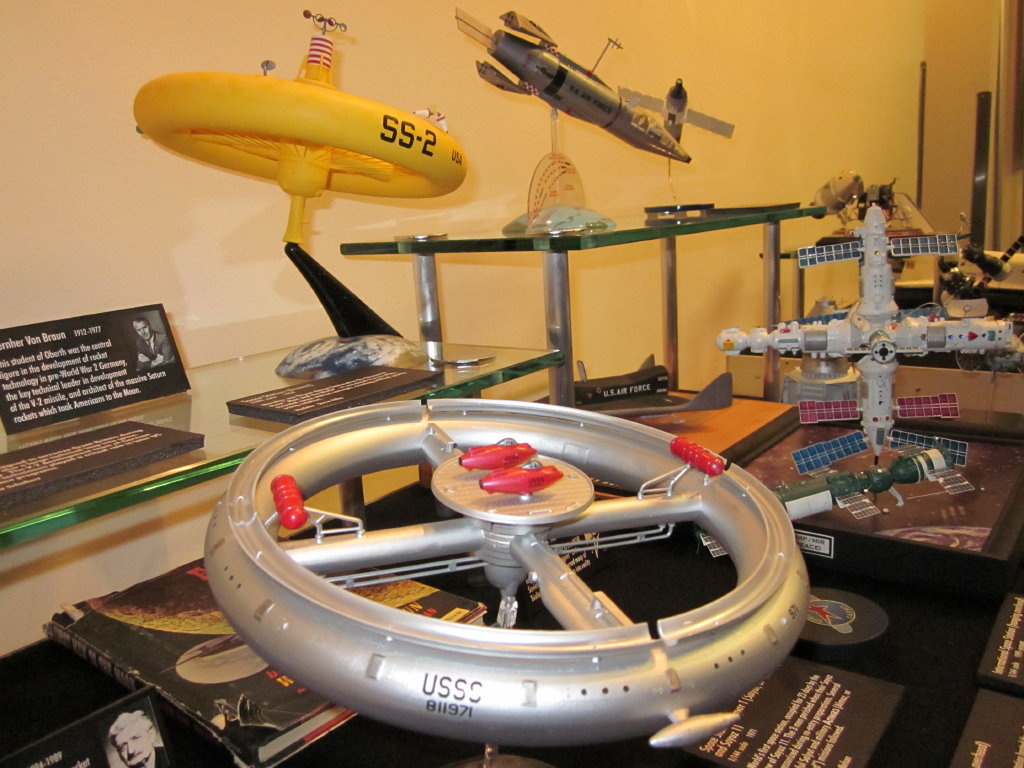 Past visions of the future

Looking ahead, future committed NWSM displays at the MoF include the following:

If you're in Seattle, come check out the Museum of Flight and the NWSM model display.  In your own hometown, look into the possibility of your model club collaborating with a local museum or library - it's a natural partnership that's a win-win for everyone involved.