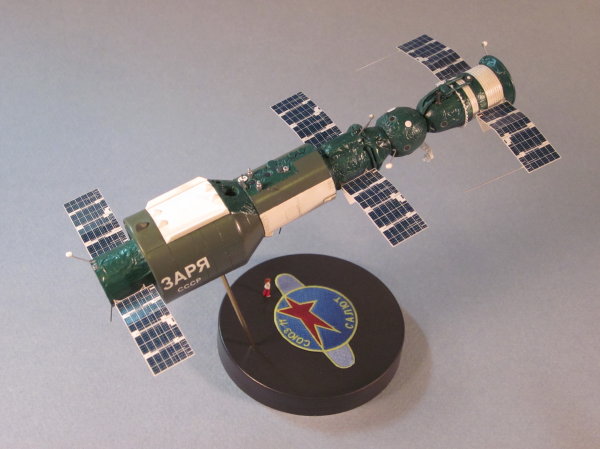 This model was acquired and built as part of Seattle-based NorthWest Scale Modelers' Museum of Flight display, "50 Years of Human Spaceflight".  The subject was doubly significant for this display: Salyut 1 is considered the world's first space station and its occupants, the crew of Soyuz 11, tragically perished as they were returning to Earth. 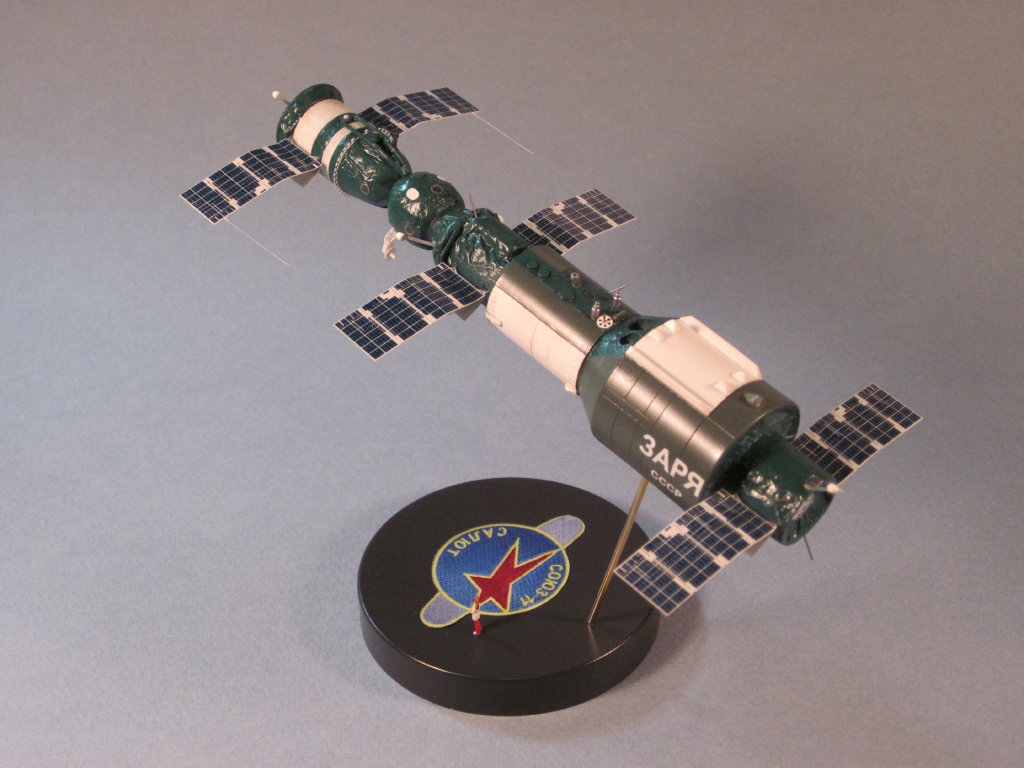 Salyut 1 and Soyuz 11 with home-made base

A concise history of Salyut 1 and Soyuz 11 can be found in the online references.  Readers wishing to gain an in-depth understanding of the world's first actual space station, the three week stay of its ill-fated crew in the spring of 1971, and the impact of the crew's deaths on the Soviet people and space program, are referred to the Ivanovich book. 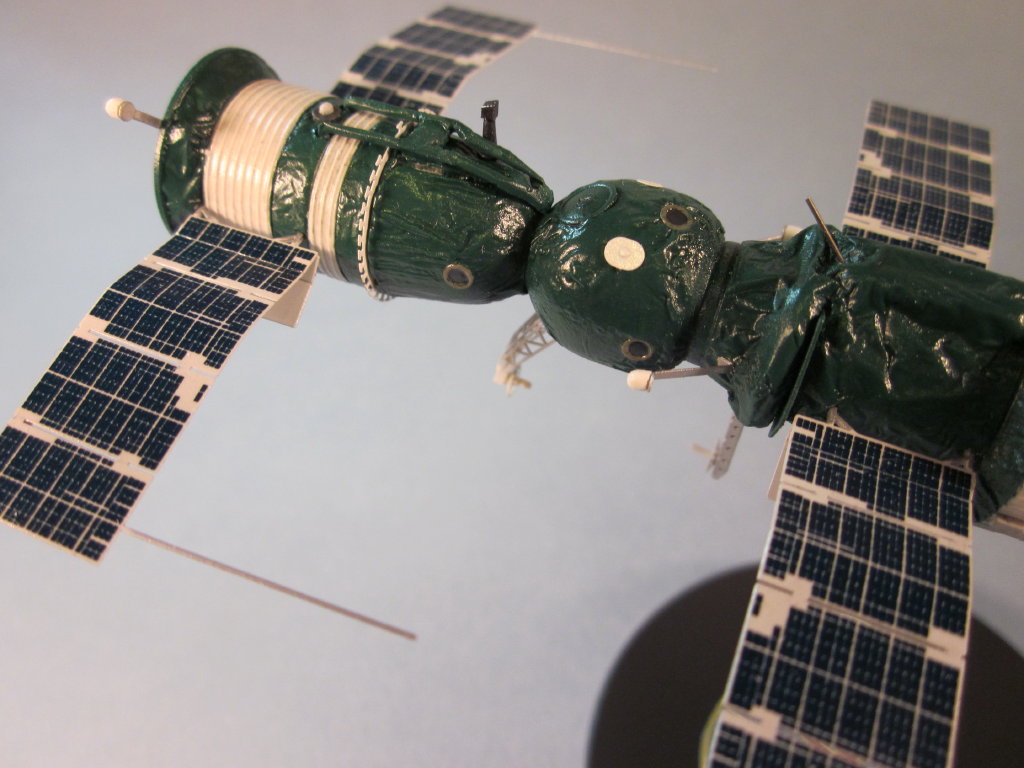 The three crewmen of Soyuz 11 who lost their lives were Georgi Dobrovolski, Vladislav Volkov, and Viktor Patsayev.  They were not wearing spacesuits when the spacecraft inadvertently depressurized during re-entry preparations, and they are the only humans to have perished in the vacuum of space.  Their remains are buried in the Kremlin Wall in Moscow.

New Ware is a small Czech enterprise devoted to resin kits and photo-etch detail sets of factual spaceflight subjects.  All products are ordered directly from the New Ware site (see references), using PayPal for payment.  The only difficulty, a small one at that, is that New Ware has to provide you with a quote in Czech Koruna before you submit payment.  Your models will arrive a few weeks later. 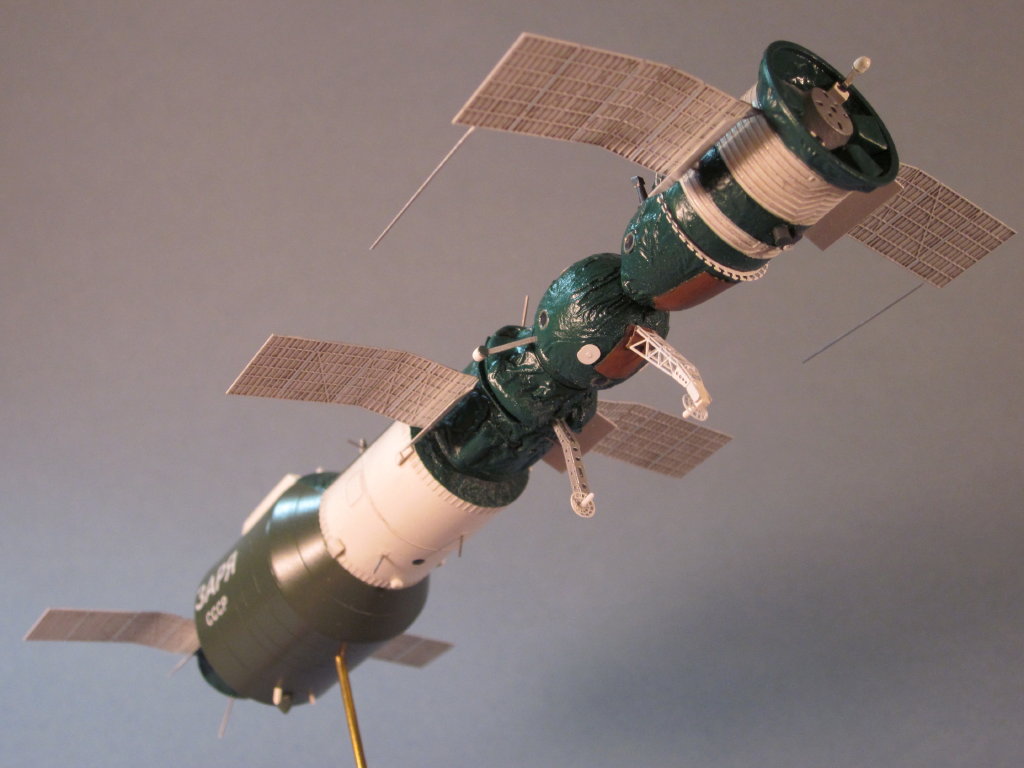 Salyut and Soyuz assembly is broken down into several major modules, and added detail parts, mostly represented in superbly cast resin.  Various antennae, supporting structures, and the 6 solar panel assemblies are represented by photo-etched brass.  You will need to supply 0.5 mm diameter rod for several antennae; I used music wire for this purpose. The photovoltaic surfaces of the solar panels are emulated with decal, which are designed with clear areas that assume the underlying panel is white. 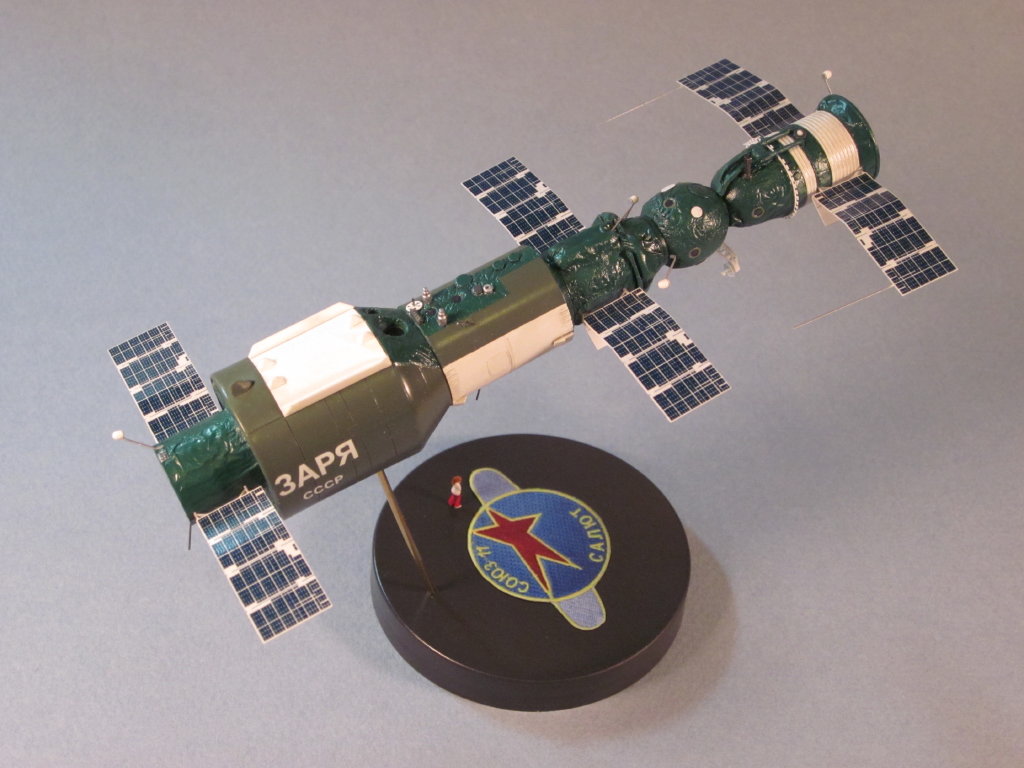 Instructions consist of 2 double-sided black and white pages, one devoted to detailed part location information and assembly guidance, and another containing many multi-view illustrations for painting and decals.  Color versions can be found on the New Ware site, which is helpful.  The drawings appear to agree with the very skimpy photo references of Salyut 1, and most known photos are shown on the New Ware site as well as included in the Ivanovich book.

The decals are well printed and thin, and provide white Cyrillic "Zarya" markings, as well as solar panel photo-voltaic cell treatment.  Duplicate decals are provided, a nice touch that alleviates a bit of stress during decal application.  The decals worked fine with Micro Set and Sol treatment.  Why "Zarya", you ask?  The station was intended to be named Zarya (meaning "dawn") until a last minute change (one of the reasons being that mission control had historically been given that designation).  When the name "Salyut" (meaning "salute") was selected, no one bothered to repaint the Zarya markings already applied to the station. 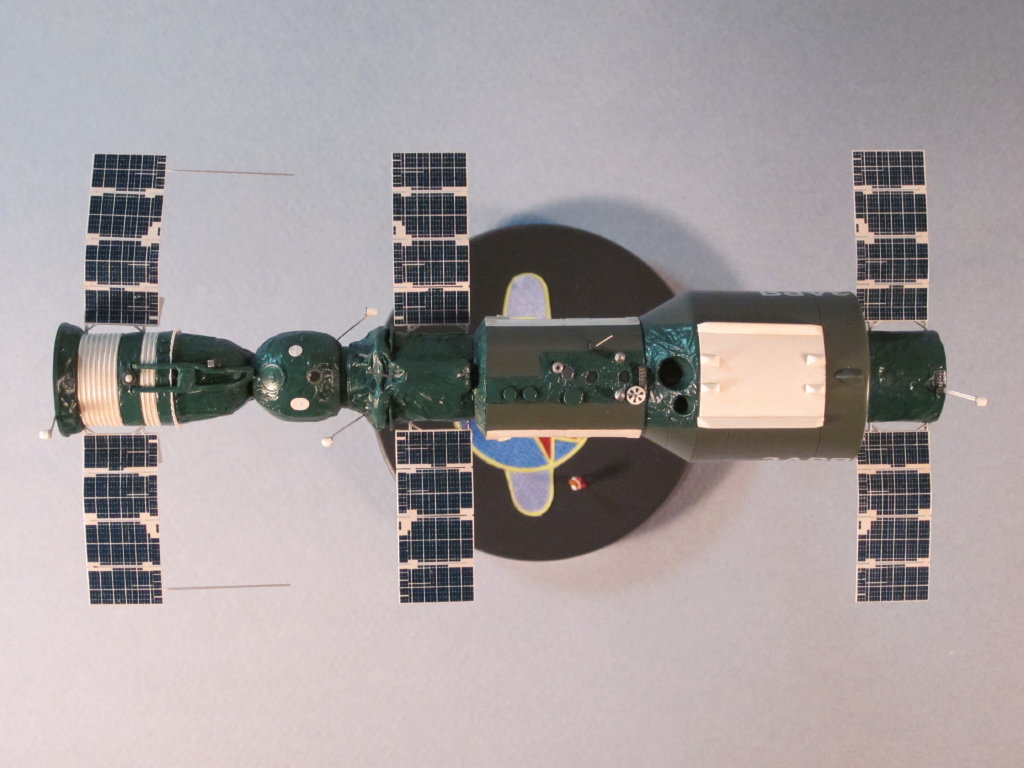 Salyut 1 and Soyuz 11 in plan view

You are on your own to come up with a suitable base to display this fragile model.  I recommend you construct your base, or at least a temporary version, early on in the build; it will be a great help in the final assembly stage when it becomes almost impossible to find a way to set the model down without breaking something.  I used a jar lid from my stash, augmented with fishing weights and a laminated sandwich of styrene layers to accept a brass rod.

The build process for what is essentially a series of cylinders flying in very close formation is mostly a challenge in maintaining alignment.  First step is to clean up the pour plugs and use a sanding block to develop flat mating surfaces. I carefully marked the center of each mating circle, hand drilled a hole for brass rod, and dry-fitted each join multiple times before attempting any bonds.  Working with a square grid is a great aid to keep the model on the straight and narrow.  I drilled several holes on each side of all mating surfaces as cavities for excess glue to flow during the join.  To maximize strength but give me some working time, I used 5 min epoxy for each bond. 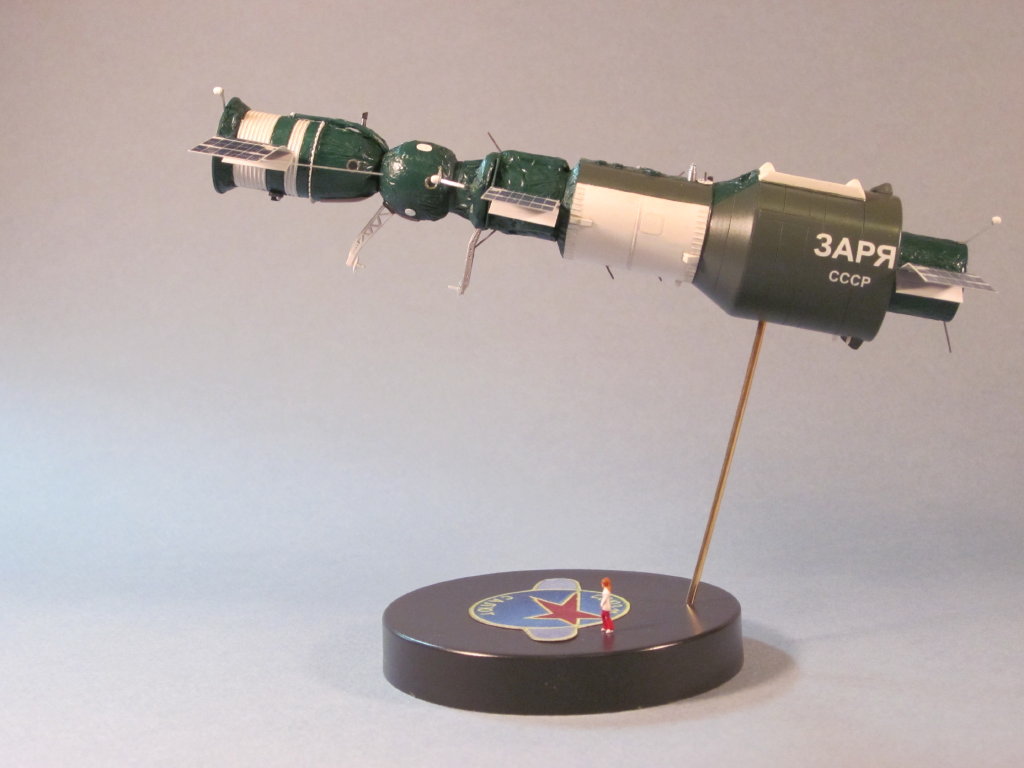 Salyut 1 and Soyuz 11 in profile view. Figure is a Preiser N-Scale railroad accessory.

Fit of the parts is decent, my main challenges coming from 2 areas:

Painting is a series of painting / masking / painting sequences to obtain the white and 2-tone green color scheme.  The online New Ware color illustrations render the greens a bit garishly, but the specified Humbrol colo(u)rs look reasonable and consistent with the rare photos that are available.  I painted most of the small bits separately and applied them at the end with either CA glue or white glue, depending on my level of courage.

After consideration of the fragility of the PE solar and radiator panels (cleverly engineered as a single PE part for each of the 6 panels), I painted them with Floquil Reefer White, and applied a Duracryl lacquer gloss finish, all while still on the fret.  Decals were then applied and also sealed with gloss, before separating the panels from the fret.  A tiny bit of touchup was required to finish them off.  The final stage of solar panel sub-assembly is a delicate series of bends, explained diagrammatically in the instructions, to achieve the proper geometry when viewed fore and aft.  A PE bending tool, patience, and a systematic approach is recommended to get through this process.  You then carefully mount them to the Salyut and Soyuz holes you hopefully drilled earlier per the instructions; maintaining alignment here is tricky and again, patience is called for.  If necessary, you can make final alignment tweaks after installation with careful bending at the root. 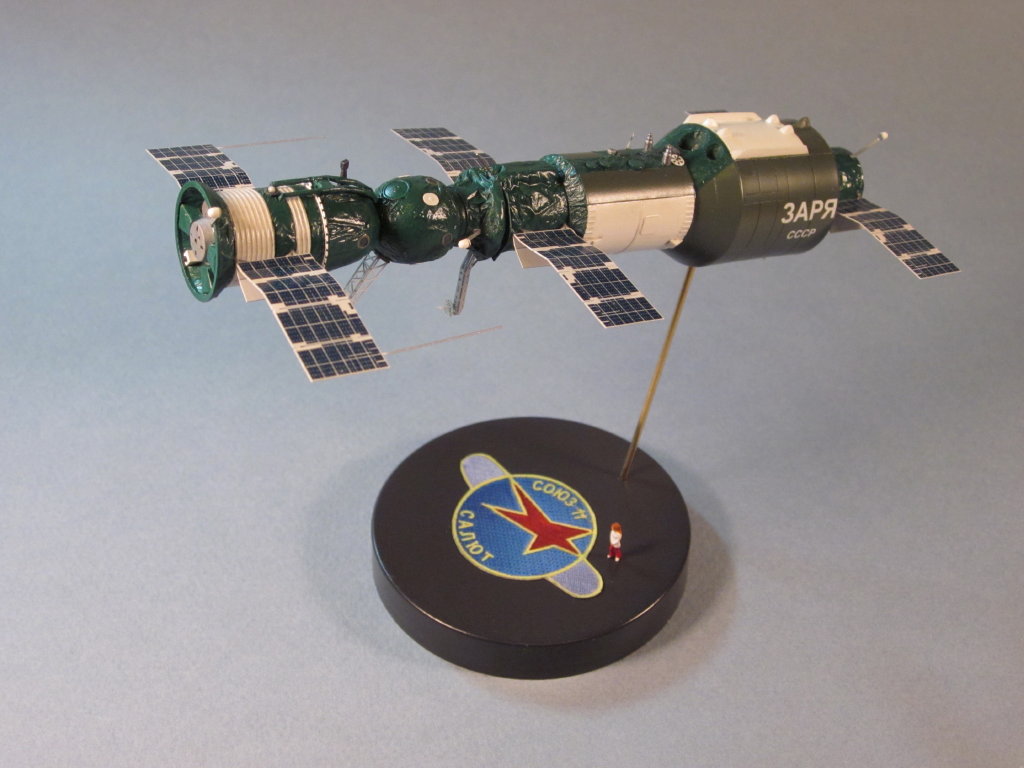 (Note: there were variations in the orientation of solar panels on early Soyuz spacecraft, including some intended for short flights that had no panels at all.  The Soyuz 11 configuration apparently had solar panels inverted relative to most of its predecessors, in order to align with the Salyut 1 panels in the intended docking configuration.  The New Ware instructions and illustrations, as near as I can tell, accurately reflect the right orientation.  This, like many aspects of early Soviet spaceflight, is not 100% definitive.  As Winston Churchill allegedly said about Russia, "It is a riddle, wrapped in a mystery, inside an enigma...") 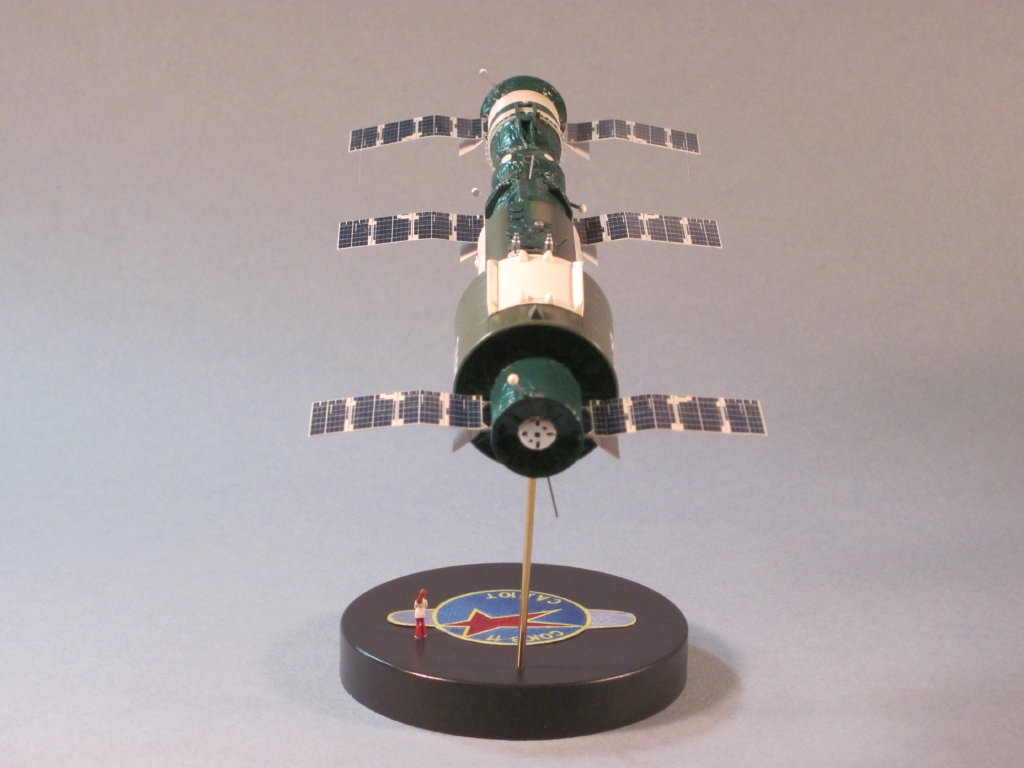 Salyut 1 and Soyuz 11 viewed from the Salyut end 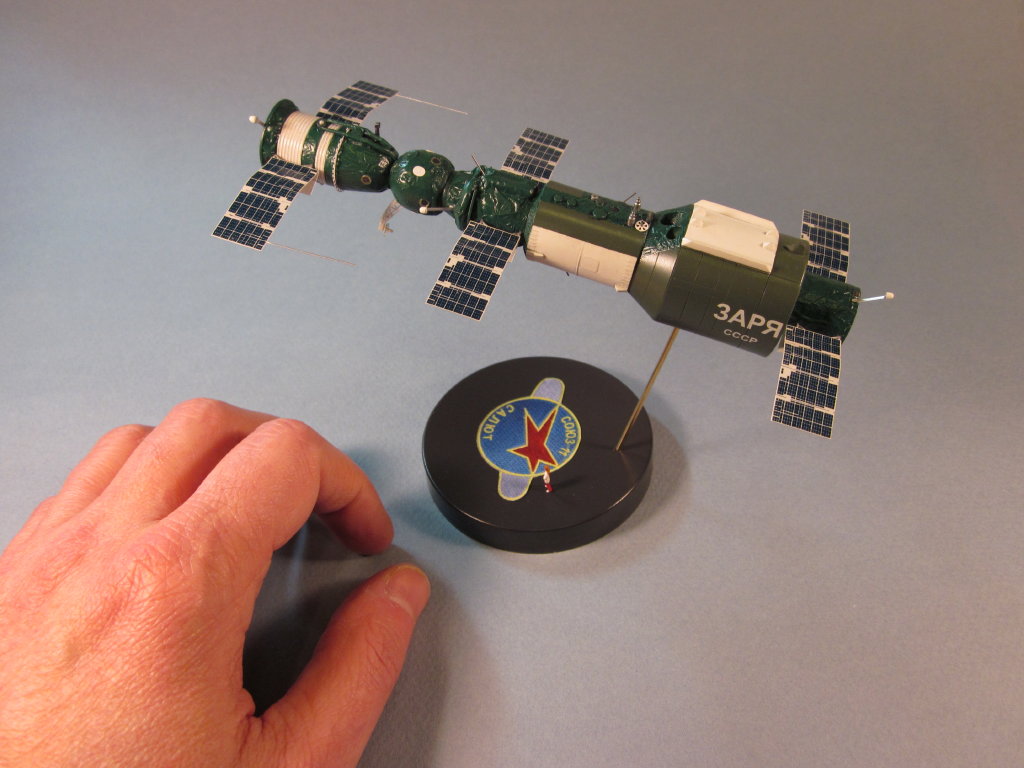 Salyut 1 and Soyuz 11 with a giant hand for scale

All that was left was to mount the finished model to my base, and then try to touch it as little as possible.

New Ware is to be commended for producing this seemingly accurate and well-engineered kit of a historically significant subject.  It is not a good choice for your first resin or PE venture, due to fragility and alignment challenges, but modelers with a little experience with these media will find it eminently buildable.  I spent 28 enjoyable hours building Salyut 1 / Soyuz 11 and its custom base.  My thanks to myself for purchasing this kit direct from New Ware.