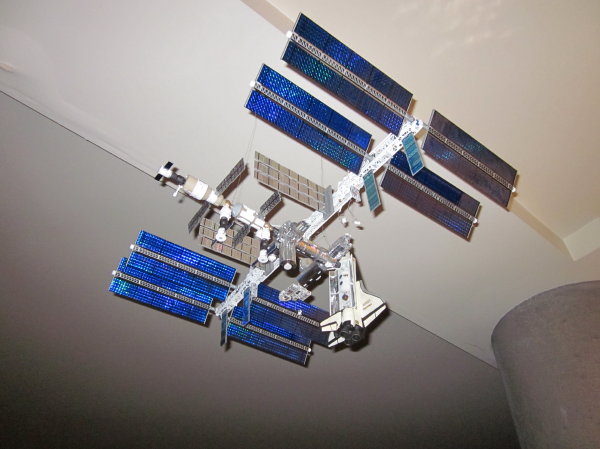 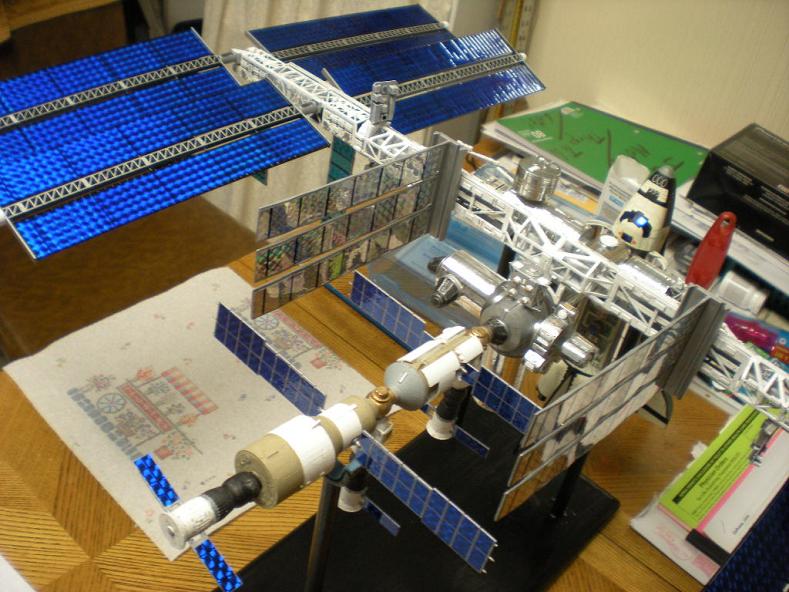 ISS in final assembly
This model was acquired and built as part of Seattle-based NorthWest Scale Modelers' Museum of Flight display, "50 Years of Human Spaceflight".  The International Space Station is the crowning achievement of the last 20 years of human space endeavors.  It is perhaps the greatest international technical collaboration in history.  It is clearly visible to the naked eye when passing overhead (go look for it at the link at bottom).

When the call went out for volunteers to build / display any of the real space hardware models – I was honored to step up to the plate. 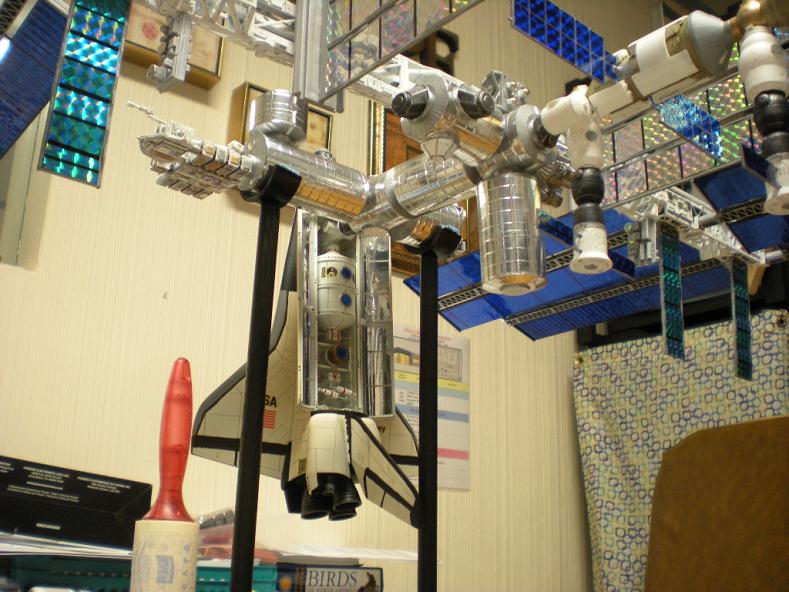 We had well over 9 months notice – so I knew I had plenty of time for the project. Right!

I have tons of huge boxes with dozens of unbuilt models in each. Do I have an organized method of knowing what models are in what box? Of course not! Could I find the 1/144th ISS-NO!! I found the Heller one- but this would mean major modifications and additions. Oh well- time for improvising. I was asked to build the ISS as accurately as possible with what is actually floating up in space at this time. 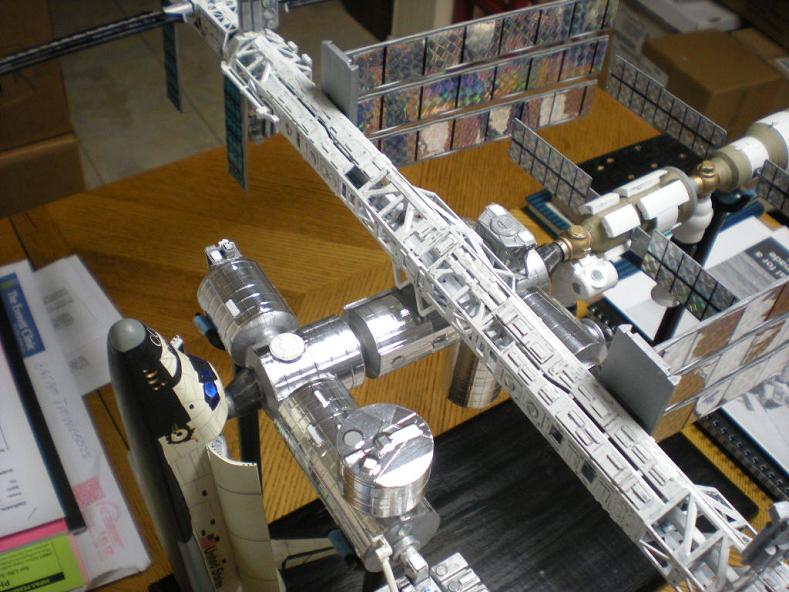 And so the research began. Two notebooks full to be exact. Color pictures, articles, and of course details of all modules and the huge solar arrays. Page after page of the actual build sequence by NASA.

So now all of a sudden I am down to just a couple of months until the display at the beginning of Feb 2011. Where did the time go? By pure luck- Revell decided to re-release (in late 2010) their 1/144th ISS so I ordered another one.

To their credit- Revell did a tremendous job years ago with the known information at the time of what the ISS was suppose to actually have. Of course- the reality of what actually ended up floating above our heads due to budget cuts and such came after the model was released the first time.

I'm glad I did the research. A lot of the modules in the kit were not used. Others had to be re-positioned. And a few scratch built items had to be made (experiment packages etc...). 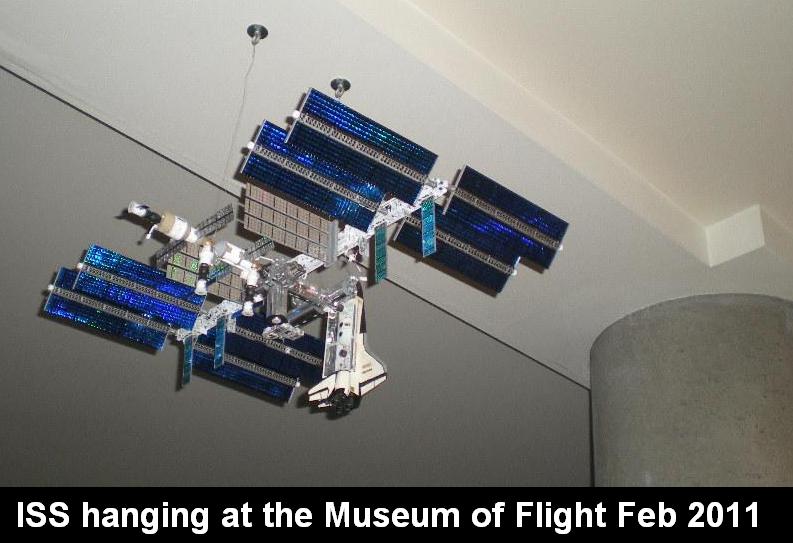 Then, while building, I always had in the back of my mind the transportation issue. This was a huge built up model covering ½ a normal dining room table. I purposefully wanted it to be easily torn apart and made easy to transport. With about 24 total solar arrays- 8 of them HUGE- how to make sure they stayed on if not glued while being displayed.

In the end- I made the 8 huge solar arrays detachable with the other smaller ones being glued to their respective modules. The main ISS truss was also made detachable. All the main living modules were glued together as one long configuration.

The painting was straight forward. A lot of artistic merit was used due to the fact that when looking at the ISS in space- depending on the lighting (sun) and shadows- a lot of the modules were shining like chrome when in fact they were not made of chrome at all. The solar arrays were covered in different colors of prismatic paper to 'simulate' their colors under the same space conditions. 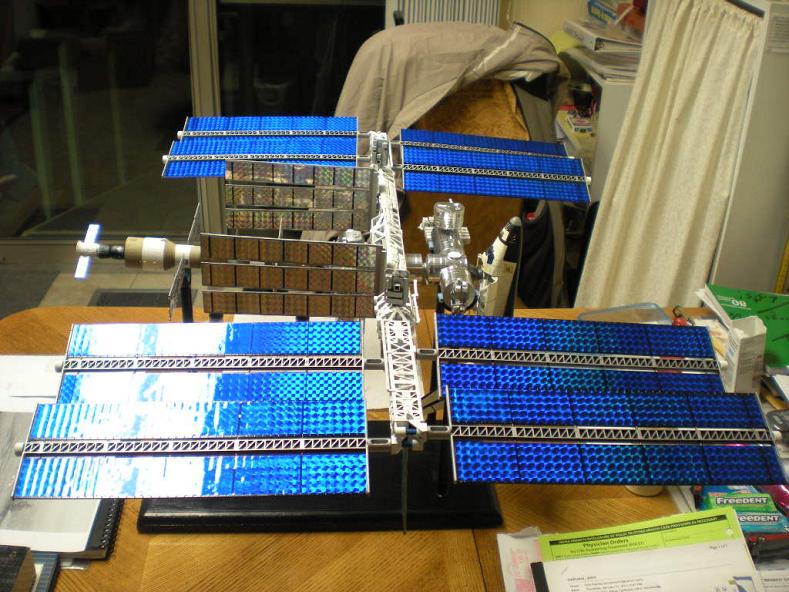 Aluminum foil was also used to give the impression of the chrome effect of the sun shining on the modules. I added 3 astronauts for a scale comparison as well as a 1/144th space shuttle docked to the ISS. 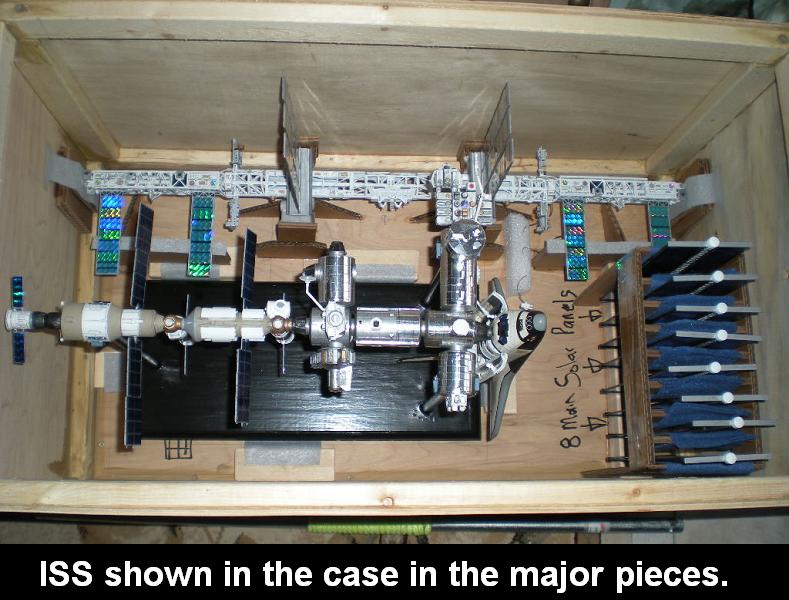 The ISS in its transport crate 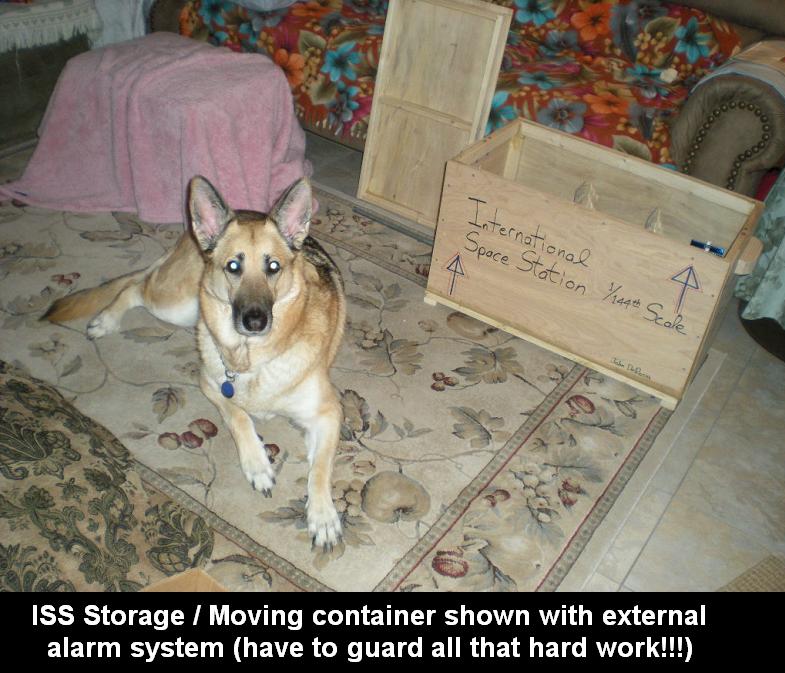 Lastly- a custom case was made for the ISS. The case was about 20 inches wide by 3 feet long by about 24 inches high. (See pictures) This would not only serve the transportation to and from home- but also as a storage case when it was time to go into semi-permanent storage at home. This of course brings to mind the movie-"Raiders of the Lost Ark"...when at the end of the movie they stored the found 'Covenant' in the HUGE warehouse that went on for acres and acres....laugh laugh...

This was a most enjoyable project and probably used about 80 hours total give or take. Just don't tell me that we are really going to stop the U.S. space Shuttle flights....