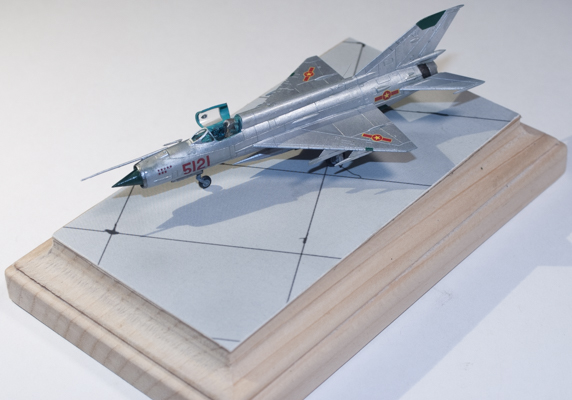 Is there truly a need to introduce the MiG-21? Since there were almost 14,000 produced finding a MiG-21 somewhere in the world shouldn't be a problem. The Attack 1/144 MiG-21s are definitely nice kits, but Eduard's definitely surpasses it. The level of detail is outstanding, rivaling most other producer's larger scale models. This is truly a first-class model.

To be honest this build not only started soon after I published the First Look but also went through a few thought processes of how I wanted to finish it. It also truly shows the "circle of life". Originally I was going to finish it out-of-the-box in the supplied North Vietnamese markings and then started to venture closer to finishing it as a Czech bird. Once the Brengun photoetch for it was released I decided to use it, at least in the cockpit. So I went ahead and decided that I would open up the canopy (an important first step with this model) and add the photoetch into the pilot's "office". Since the Brengun photoetch is unpainted I not only painted it after accordingly, but also decided to use the Eduard internal decals over the photoetch. This really brought the insides to life.

However, unfortunately, this is about all I remember. I did add weight so the model sits on its nose gear, but I don't remember how much. Since this model was started either in 2011 or 2012, and I didn't keep good notes, the rest of the build is fuzzy. I believe there isn't much putty in the kit as the fit is very precise. One thing I did try was to modify the nose so I could fit the nose cone in after the model was assembled so there wasn't any masking on the cone needed. Unfortunately I didn't go far enough and adding the cone at the end resulted in the nose of the fuselage openeing just a little and I had to take care of that.

I ended up priming the model with Vallejo's grey primer followed by a coat of Vallejo's new metallic Aluminum. I then used True Metal's metallic "wax" on a few areas of the fuselage and wings to give a dissimilar appearance to the finish.

As I mentioned I did end up finishing this kit as the North Vietnamese aircraft that is provided for in-the-box. I ended up using no overcoats on this model at all, the decals adhering well enough with just setting solutions. After most of the work was done I ended up picking up Vallejo's new Environment Wet Effects. I decided to try and make the model – and base – look like it had been sitting out after a rain storm so I started applying the Wet Effects to it, trying to get it to look like the majority of the water was on the very top of the aircraft with some run-off. I think it came out great but it's really difficult to tell in the pictures. Using the Wet Effects I also sprayed the base (which consisted of Mark I's Soviet Tarmac mounted on a wood base bought at Hobby Lobby): first I cut out a 1/144 top-view of the MiG-21 and applied it sitting above the display; I then sprayed Future over the rest of the "Tarmac" to give it a shiny appearance; finally I added a few drops of the Wet Effects to the Future already in the airbrush and started to spray "splotches" to give the effect of pooling water. That portion might have gone better but, when you look at the display in person, it came out "good enough".

I may add some of the Brengun MiG-21MF Accessories (such as the wheel chocks and ladder, etc.) to give the display a little more interest, but until then I wanted to add the article to Internet Modeler.

The Eduard 1/144 MiG-21 is definitely the best kit of this aircraft in this scale and looks awesome when finished. There are a lot of options for this kit currently and the only things left to do are the really early MiG-21s, such as the 'F' and 'PF', etc. So coupled with all the already available options you can have a fleet of MiG-21s that don't take up a lot of space, look great and are fun builds.

My thanks to Eduard for the MiG-21MF kit and Brengun for the photoetch accessories. In addition, thanks to Kits-Shop for providing the Mark I base. 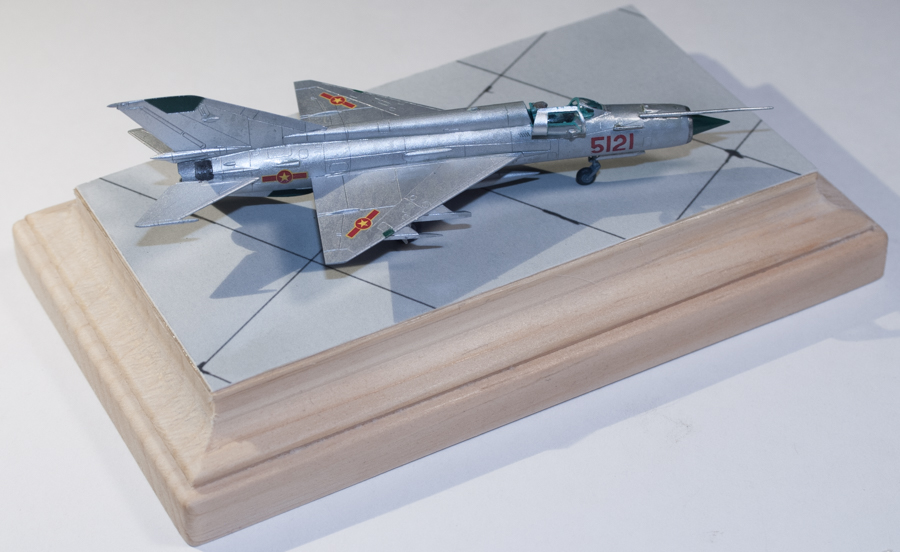 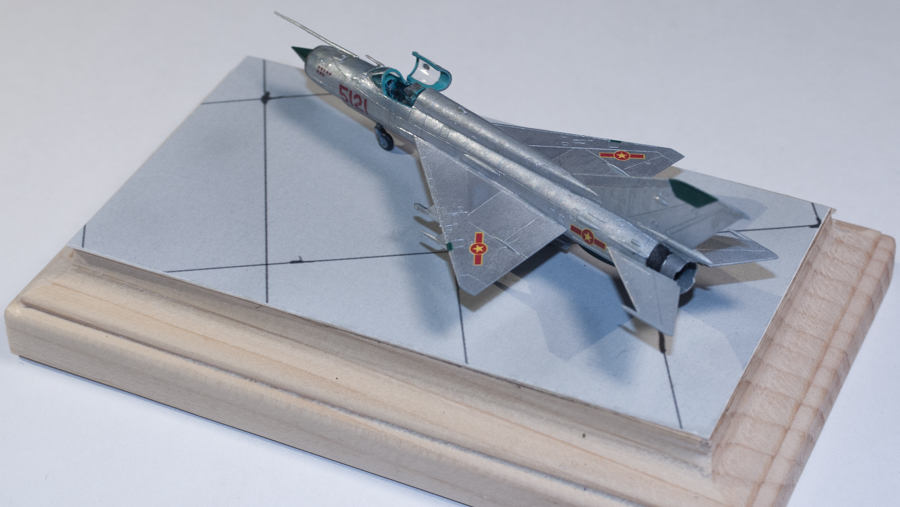 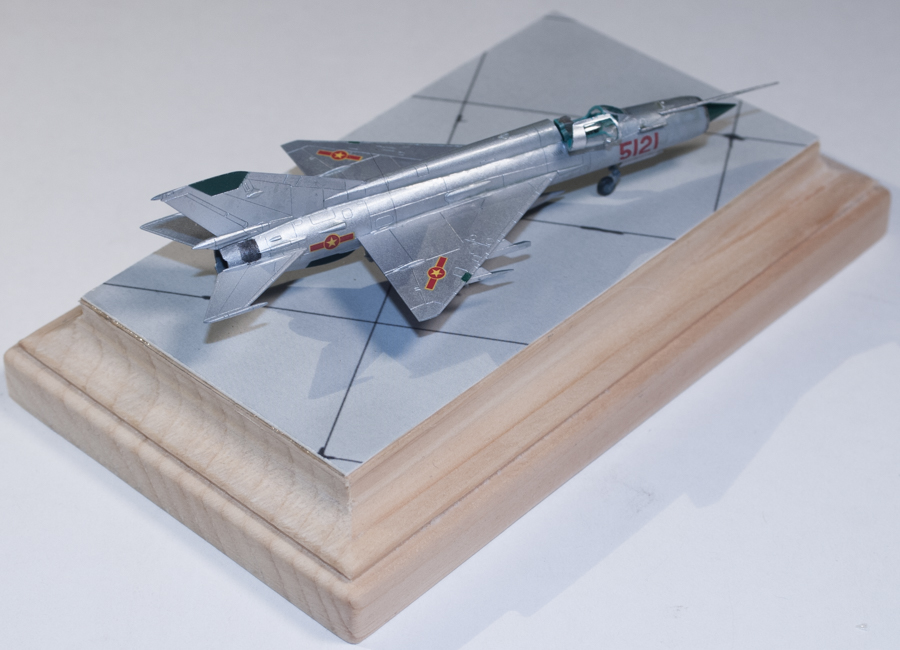 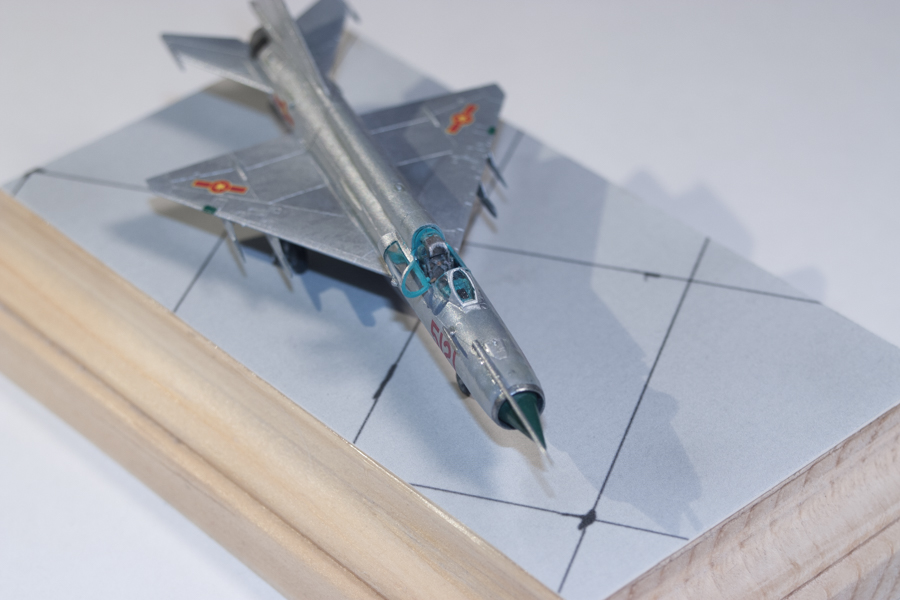 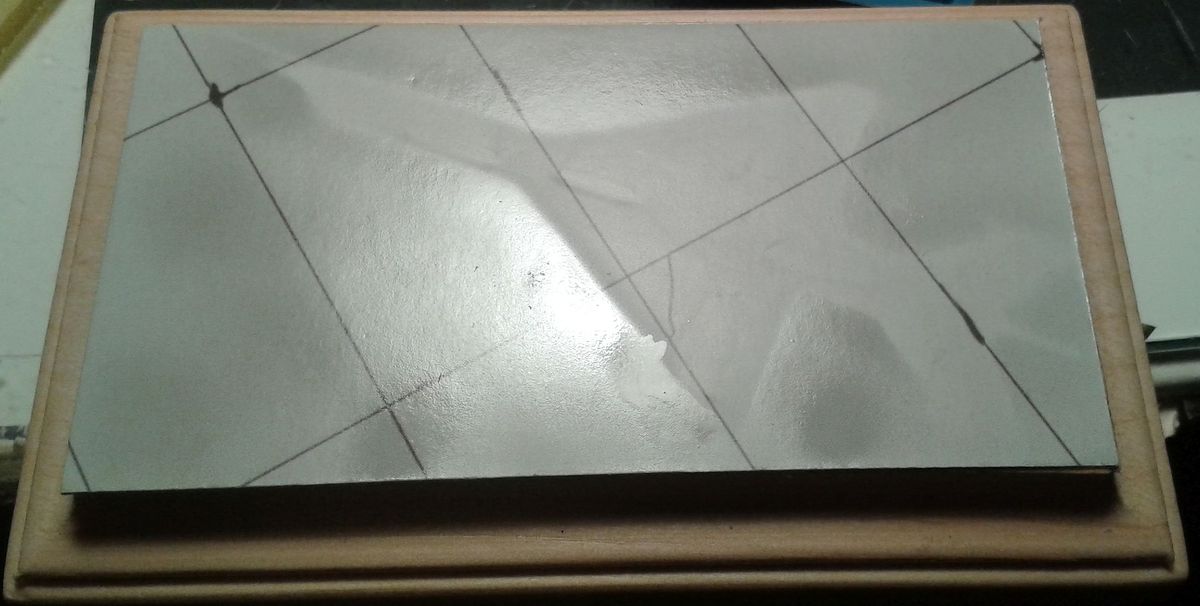 Base shot with only a little bit of flash 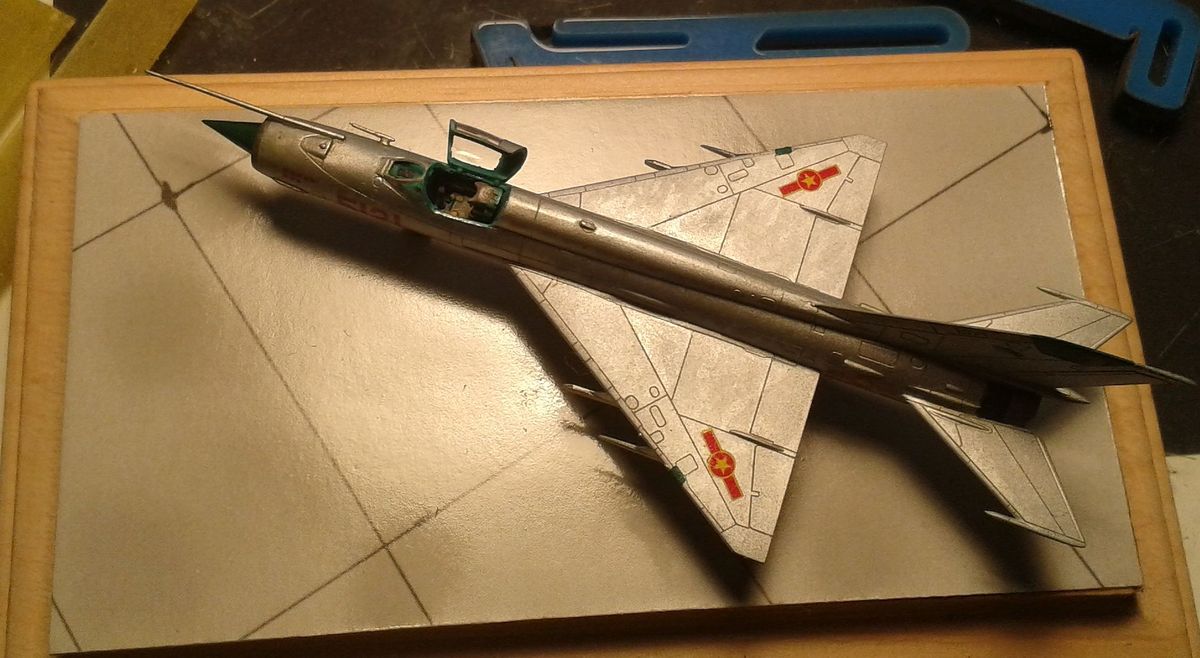 Overall shot with no flash