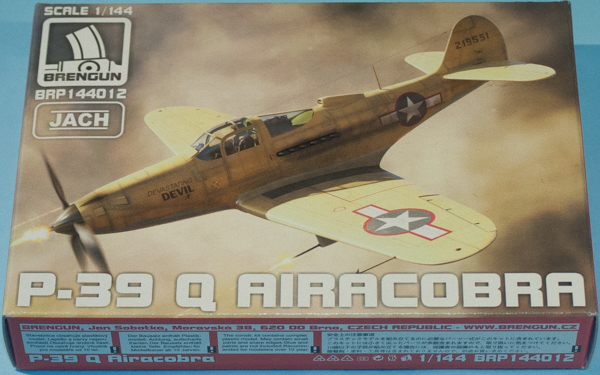 The P-39Q was a later version of the Bell P-39 that was first introduced with the in-wing 30 cal guns removed which were replaced with 50 cal guns slung under the wings in gun pods. There were also some sub-versions of the P-39Q that had reduced armor, fuel capacity increased and the Type A-1 bombsight adaptors added (P-39Q-5); some were modified to carry cameras for reconnaisance (P-39-Q-6); increased armor, increased fuel capacity, Automatic Boost controls added, winterization of oil systems and rubber engine mounts (P-39Q-10); etc. It was definitely a more robust version of the P-39 and used extensively by the VVS.

Now the fuselage is assembled and the stabs glued on, it's time to add the one-piece wing. After you have a complete airframe now Brengun has you clip off the wing leading edge guns prior to adding the underwing gun pods. It is in this step you add the canopy and the exhaust stacks but at least for the exhausts, I would leave those off until the end and after painting.

The Brengun 1/144 P-39Q is an excellent kit of the Airacobra in 1/144. It will look great once finished and if you want to take it to the next level, by all means pick up Brengun's own aftermarket for the kit.