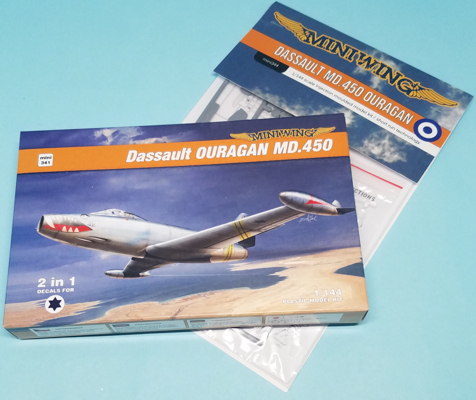 "The Dassault M.D.450 Ouragan (French: Hurricane) is a French fighter-bomber developed and produced by Dassault Aviation. It has its origins in a private venture by Dassault to produce an all-French aircraft which would make use of jet propulsion, which subsequently would receive orders from the French Air Force.

"The Ouragan holds the distinction of being the first jet-powered French-designed combat aircraft to enter production, and thus played a key role in the resurgence of the French aviation industry following the Second World War. The Ouragan was operated by France, India, Israel and El Salvador. While in Israeli service, the type participated in both the Suez Crisis and the Six-Day War."

Miniwing first put out a 1/144 Dassault Ouragan back in 2016, but it was all-resin. They have completely re-done the Ouragan, this time in injected plastic.

The Miniwing 1/144 Dassault M.D.450 Ouragan consists of 21 pieces of gray plastic, and a canopy in clear injected plastic. Based on how you purchase your kit, it will come with either three marking options (if buying the boxed, "2 in 1" release) or one (if buying just the carded kit). The boxed version sent for review comes with the following Israeli markings:

The markings for the Salvadoran release are for the Fuerza Aerea Salvadorena, San Nighel AB, laste 1970s. This machine was finished with Dark Tan, Dark Green and Medium Green upper surfaces, with a black nose underneath the "shark mouth" and a light blue anti-glare panel in front of the windscreen. The underside was finished in Gray.

Decals are very nicely printed and appear in register. Included on the decal sheet is an instrument panel but alas, no seat belts. Odd that in the past Miniwing included belts on their decal sheets but the most recent releases don't include them.

Once the cockpit is painted, assembled and added to the starboard fuselage half, then the fuselage halves are glued together and the horizontal tail surfaces added. The next instruction step has you add the one-piece wing, tip tanks and outboard fins for those tanks. It also has you add the canopy but be sure to mask it, first. While the resin release included masks for the canopy, this injected release unfortunately does not. Hopefully an outfit like Peewit will create masks for the kit.

The last part of construction is adding everything to the underside but all best left off until painting and decaling are finished.

It's nice to see Miniwing release more injected plastic kits. This time they turned their attention to re-doing their old resin Dassault Ouragan and it is truly a very nice kit. I'm looking forward to building these.

Many thanks sent to Miniwing for sending the Ouragans to review.