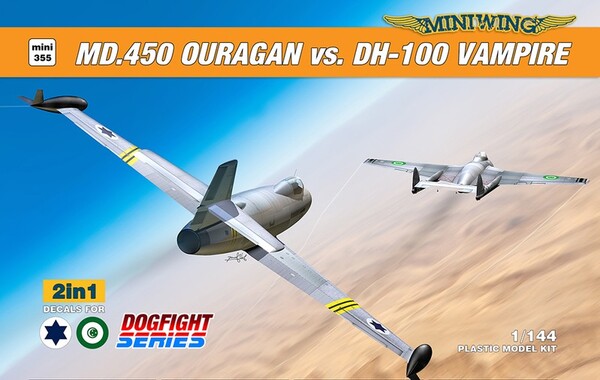 I've reviewed both the Ouragan and the Vampire in the past, so refer to those articles for how each model is broken out. This article will concentrate on just the markings provided for both kits.

You receive decals for only two aircraft in this release.

Decals appear to be in register and are nicely printed. However, there are no seat belt decals and only one instrument panel decal, which is just for the Ouragan and nothing for the Vampire.

Building each shouldn't be difficult, but I've read you need to be careful with assembling the booms to the Vampire's fuselage. Other than that, they should be straight-forward builds. I'm in the midst of building an Ouragan and it's not a difficult kit to put together.

Miniwing has created a very unique boxing, showing both sides of an air fight. I hope to place these in an in-flight mode, as shown on the box top, to give a unique view of these jets.

Huge thanks to Miniwing for sending the review boxing.