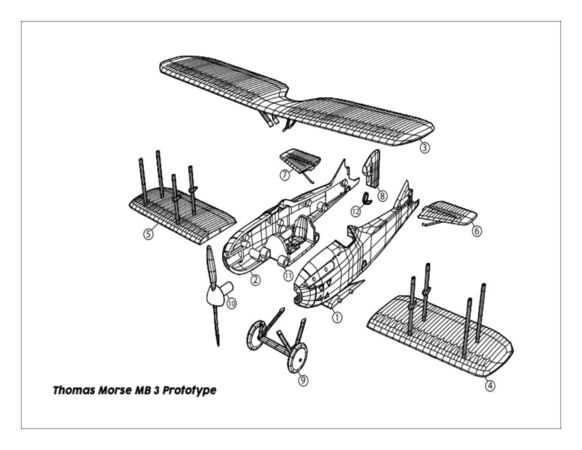 A short time ago, Aeronaut Books released a new title on the Thomas-Morse MB-3. It was well received and a book definitely needed. It showed just what the first US-produced fighter was like and how it fared through time.

In my review, I lament the fact that only one model was known to have been produced of the MB-3 and that from Sierra Scale, now long out of production. Thankfully Out of the Box Models heard my plea and produced a 3D printed kit, first of the MB-3 Protoype (of which there were three), and has plans to produce the Thomas-Morse MB-3 production fighter, as well as the Boeing MB-3A, both I am definitely looking forward to.

The Out of the Box Models 1/72 Thomas-Morse MB-3 Prototype consists of 14 pieces of gray colored 3D printed resin and decals for one aircraft, the second prototype 40093.

Decals appear to be in register and are nicely printed.

Being 3D printed, naturally there are going to be print lines, or striations, unfortunately a little more noticeable than with other 3D printed models. But not insurmountable and sanding shouldn't be too difficult. The resin used in this print is a little more forgiving than most. But with that being said, care will definitely need to be taken. All struts are molded to their respective parts: wing struts to the lower wings; center struts to the upper wing; and tail struts to the bottom of each horizontal tail part. It will be these most care will need to be taken as not to break them off when removing the parts from the "sprue". Same with the center struts molded to the upper wing: there are a lot of "sprue" connecting points so you'll need to remove a little at a time, ensuring you're not cutting away the struts.

In my opinion, this is one time where separate struts would have been better: the upper wing and the horizontal tails. The struts on the lower wing shouldn't present a problem if you take your time.

The cockpit is one-piece except for the instruments which are printed to each fuselage half. The problem will come when trying to remove the "sprue" attachment points from the control stick. Out of the Box has molded that "to scale" which means it's quite thin and delicate. This will probably need to be replaced as with my heavy hands, don't see how I can possibly save the stick when clearning the burrs from the attachment points.

There is little-to-no rib effect on this kit but most will be removed with sanding. This will be a time to try and replicate the effect with painting. The other difficult item will be painting the wheels and tires, as they are molded in situ with the landing gear struts; it's all one piece. Masking will be "interesting" if trying to airbrush although this may be a time to just hand paint the tires.

Even with all these comments I welcome this release. I knew about the MB-3 in the past, but once the Aeronaut Books title was published and after I read it, I knew I wanted to model this important US produced aircraft. Now, thanks to Out of the Box Models, I can. Just with plenty of patience.