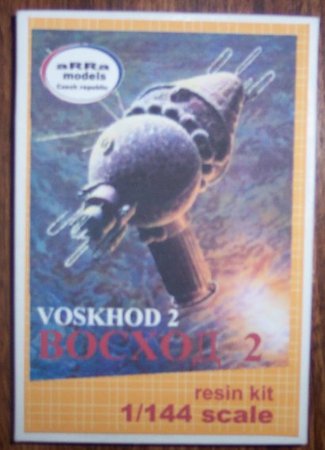 Voskhod 2 (Russian: Восход-2) was a Soviet manned space mission in March 1965. Vostok-based Voskhod 3KD spacecraft with two crew members on board, Pavel Belyayev and Alexey Leonov, was equipped with an inflatable airlock. It established another milestone in space exploration when Alexey Leonov became the first person to leave the spacecraft in a specialized spacesuit to conduct a 12 minute "spacewalk".

Wikipedia entry for the Voskhod spacecraft

Instructions and parts list
As you might expect, this review will be very similar to the Vostok review. This kit does come in a box instead of a ziplock bag like the Vostok.

Instructions are a single page exploded drawing of the kit. These are accompanied by a multi-view color drawing showing the paint scheme. It also includes a side drawing of the completed model.

Finished model and paint scheme
The kit consists of 7 cast resin pieces, 13 "beads", 8 wire pieces and 8 nylon "whiskers". There is also 1 piece of wire included for the umbilical cord for the space walker.

The resin pieces look good and the capsule is identical to the piece in the Vostok kit. There are no sprues, so all pieces are contained in zip lock bags. Casting looks better than the Vostok and there are no obvious bubbles or short shots. All parts look true and dry fit well. The exception is the equipment module and the retro pack. The equipment pack is the same piece used in the Vostok, which is made to fit into the 3rd stage. Since the retro pack is included, the pieces will have to be cut and sanded to mate cleanly. Nothing horrible, but some care will be needed to not over-cut or over-sand the parts.

There is a nose cone part and a cylindrical airlock. The airlock was an inflatable "bag" with pleated sides. The part looks like aRRa has included the pleats in the casting. We will see how it paints up.

Parts
The same string of beads is provided for the spherical tanks at the top of the equipment section as in the Vostok. These need to be cut apart and attached separately to the resin. They seem irregularly shaped to me, so they will be replaced as I am doing on the Vostok. There is also a resin piece with some tanks. This is because there should be 1 tank smaller than the rest. Instructions are unclear as to where that is placed in the string.

The wire antennae are all nicely shaped and will look much better than the molded plastic used in the Airfix kit. The nylon "whiskers" comprise the remainder of the antennae suit and are pre-cut to length. There is a bendable white wire to connect the cosmonaut to the ship.

There will be some clean-up work needed, but nothing out of the ordinary. I estimate this to be a 10-15 hour project. All in all, I expect it to display nicely next to my Apex Vostok launcher and the Vostok when completed.

(One side note: Sunday, 6/16, is the 50th anniversary of the Vostok 6 flight with the first woman cosmonaut.)