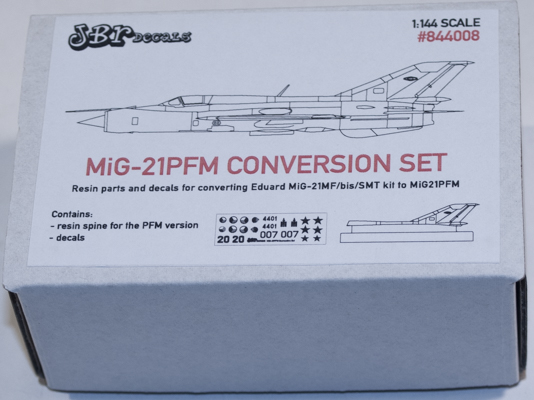 The MiG-21PFM could be considered the second generation of the MiG-21, first flown in 1964. It was mainly different from the third generation (MiG-21M/MF, etc.) in that it didn't have the saddle tank on the spine so the spine was considerably smaller.

Since Eduard has appeared to stalled their 1/144 MiG-21 production at the third and fourth generation MiG-21s it's up to aftermarket producers to create the other versions Eduard hasn't kitted. This release from JBr Decals is to turn one of the Eduard 1/144 MiG-21s into the MiG-21PFM. While there is only one piece contained in the kit – the separate spine and rudder/fin, which directly replaces the kit part (different for each specific version of the Eduard kit and called out in the JBr instructions) – there are other conversions the modeler must make on his-or-her own, and which some of them I would accomplish before assembling the fuselage halves and gluing on the resin, replacement spine and fin/rudder. First you need to remove the AoA probe on the nose of the port fuselage half, along with filling in the ammunition door behind the cockpit. Next (and not in the order of the instructions, but this is the next step I would perform) leave off Eduard kit part A7 and the outer wing pylons, and fill in the recesses and holes for those parts, plus you'll need to sand down the ridges surrounding the area where the cannon was to be installed. Finally – and best done only before your final over coat – is to fashion a new nose pitot tube from the kit-supplied one, part A27, and either scratch build a new starboard-side, smaller pitot tube or somehow adapt kit part A25.

Once everything is accomplished with the conversion then you can finish the model in one of three schemes provided for by JBr Decals:

Decals are to JBr Decals' high quality and really look great. Personally I'm hoping, with all the air forces that flown the type, JBr Decals is working on a separate decal sheet with more MiG-21PFM options on it.

So if you're like me, and have multiple boxes of Eduard 1/144 MiG-21s in your stash, then you'll want to pick up this conversion set to provide different variants of the MiG-21 on your finished shelves. Huge thanks to JBr Decals for sending this conversion to review. Now to build a MiG-21PFM.