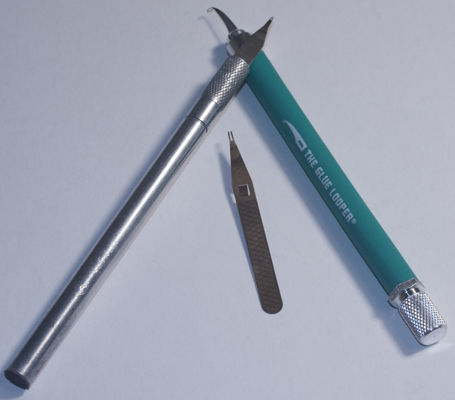 A Comparison of Glue Applicators

As I mentioned, the first released was The Glue Looper, "Version 1" (V1). This was primarily a brass applicator with a unique "loop" that held the glue until it was time to apply it. V1 came with three different sized "loops" with four of each size. The reasoning behind containing multiple heads within the same package was because these were brass, and the method to cleaning dried Cyanoacrylate (CA) from the loop was to burn it off. Because of the burning, eventually you'll burn through the brass. Plus burning brass makes it very malleable so trying to put the edge to the part to be glued could be problematic when the loop won't hold its shape.

Be that as it may, V1 of The Glue Looper was good for applying "large" amounts of glue at one time because the loop picked up a specific amount and once you put the edge of the loop to the part being glued, the entire amount of glue would be released.

Next released was The Glue Looper "Version 2" (V2). It differed from V1 because the looper was now made of steel, there was a "fold over" end to hold the looper better into a knife handle and the designer figured out by adding a "channel" to the loop meant the glue was easier to control, and smaller amounts of glue could be deposited.

Next released was Eduard's "Kapatko". Its biggest difference from the rest is it's a single-piece tool with nothing else needed (e.g. "knife handle"). There is a "leg" you bend out so the glue applicator end doesn't touch any surface when you set it down. Like the Hauler one this applicator has an open applicator end (unlike the Looper that has – well – a loop to hold the glue).

Finally the most recent applicator that was sent for review was the one from Hauler. Like Eduard's "Kapatko" the end is open but smaller than the Eduard tool. This will apply a smaller amount of glue than Eduard's and, unlike Eduard's, a knife handle is needed to hold the applicator.

Controlling V1 of the Looper is not easy, as far as applying the glue. With V1 it's "all or nothing" as you touch one of the edges of the Looper to the parts being glued together. However, with V2 it is now easier to control the amount, not only with how much is pulled into the loop, but also in how much is applied. Touch one of the loop's edge to the parts and if you go slow enough – or with a light touch – you can apply just the right amount of glue with the Looper.

With both Eduard's and Hauler's applicators it's an "all or nothing" type of application, primarily due to capillary action. The difference between the two is the amount that is applied. Eduard's end is "larger" than Hauler resulting in more glue being applied. If you need just a small amount of glue than the Hauler tool is better.

For me, I use all three but prefer The Glue Looper. The best thing about The Looper is you can use it with liquid plastic cement. I've found I can't control the brush that comes stock with Tamiya Extra Thin like I can The Glue Looper. I'll still use the brush if I need to apply a large amount of liquid cement quickly, but for further control using The Looper is best. Both the Eduard and Hauler tool aren't good with liquid plastic cement and I think it's because the ends are "open". Sure, The Looper can still be used with thin CA but I prefer to use the other tools for CA, primarily because now I have a life-time of Glue Looper tools since you don't have to "burn away" any of the liquid cement since it will evaporate. 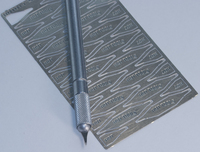 Like I mentioned, I use all three applicators as well as a straight pin. I haven't had the chance to use the Hauler applicator with applying rigging so if I need just an extremely small spot of CA, a straight pin still works. But when it comes to applying a large amount of CA I use the Eduard tool; a smaller amount of CA the Hauler applicator works best; and for liquid cement I use The Glue Looper. From time-to-time I may use The Looper for CA, but my primary use for it is with liquid plastic cement. With all three, though, you receive plenty of applicators in one package to last for quite some time.

My sincere thanks to The Glue Looper, Eduard and Hauler/Brengun for their applicators.