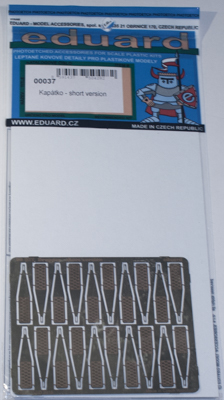 A while ago I did a comprehensive review of all the glue applicators that had been released up to that time. Since then Eduard has released a shorter version of their “Kapatko” glue applicator, one that can be used with a knife handle.

The original Kapatko was a longer glue applicator that you used by itself. It includes a fold-down tab to keep the tip of the tool off the work surface which is a really nice touch. Now, however, you have the choice of the original longer version, or this shorter version you can use in conjunction with a knife handle, like the other glue applicators I outlined in my article.

So depending on if you want another knife handle on your desk or if you’re happy with the all-in-one tool is your choice as that is the only difference between Eduard’s first release of their Kapatko and this one.

My thanks to Eduard for sending these for review.