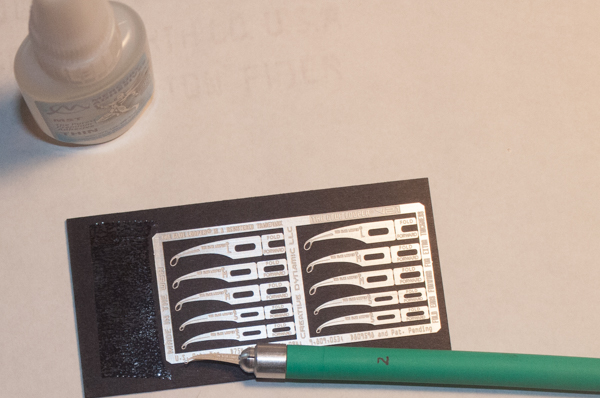 There are a lot of innovative tools for the modeling market as well as some that maybe just don't quite hit the mark. I've been fortunate to be part of The Glue Looper family from the very beginning. The first version was just, basically, a brass loop that fit into a knife handle. It was good, it did it's job and definitely helped when applying CA. Next they refined Version 1 (V1) by making it steel and providing a small groove to help with not only pulling the glue into the Looper, but also to help ancontrol how the glue flows out of the loop. There was enough changes to the Looper to label it as Version 2 (V2).

So, how to you make a product better when it was already great at what it did? A good question and I think Creative Dynamic LLC has done that by changing the shape of the "head" of the Looper. They flattened the bottom of it just a little and what that did was help you control how to apply the glue, the flow of the liquid as well as a better surface of the looper that contacts the part you're applying glue to.

I brought out the Miniwing Supermarine Attacker as I had it to a point I could start gluing parts on. So, I used the V2 of the Looper on the port wing, and the new Looper, Versioin 2.1 (V2.1), on the starboard side. As I thought, the shape of V2.1 definitely helped with the application of the glue. Sure, control was good on V2 but it was even better on V2.1.

I definitely thank Creative Dynamics LLC for sending V2.1 of The Glue Looper to review.