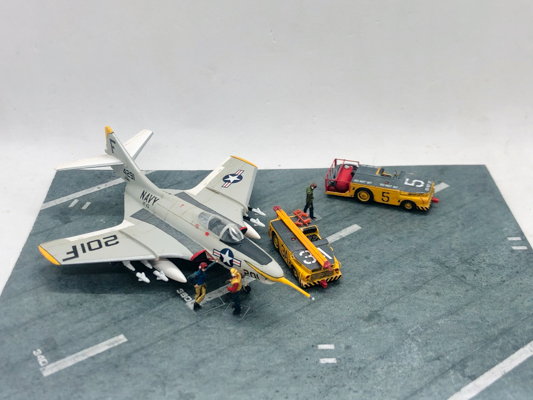 Following my article here on Internet Modeller on the 'Twogar', Matt kindly asked if I would write up my experiences building the single seat version (which I finished shortly before the Twogar). I am continuing to slowly build my way through the US Navy's inventory of aircraft and there may perhaps be a few more of those builds on here in coming weeks.

The Cougar was the swept wing development of the Panther, developed in a panic when it turned out that the Mig-15 could fly rings around straight winged navy jets over Korea. Quite a pretty aircraft I think.

This is the older FE Resin kit, which Miniwing subsequently re-issued with new decals for an earlier Dark Sea Blue or Blue Angels aircraft which I built before. Aside from decals, both kits are identical.

The kit is much like the two seat Cougar in parts breakdown (well, just half the number of cockpits!). The kit itself is fine - no real issues. Once the parts are carefully sawn and sanded off the resin frames, it is fairly easy to put together, even if the detail is a little basic.  Some filler was required on the underside wing joins, but no great amount and the area is quite nicely obscured when the tanks are on. The cockpit benefitted from a bit of additional detailing. These single seat Cougars sported Grumman's own in-house ejection seat unlike the Martin Baker jobs fitted to the later two seat Cougar (entirely unreasonably, I'd have been a little wary of in-house developed bang seats - something about it feels a bit like going to the visit the office first aider when you need emergency heart surgery!). These are quite unusual in shape so it's worth having a quick look at reference photos online if you are planning on kitting out the office. The vac canopy which makes all this effort worthwhile was well behaved (thank goodness the kit comes with two - ask me how I know!).

I modified a few areas, refining the rather stout kit refueling probe (I feel I actually did a better job by just replacing this on my subsequent two-seat Cougar build) and adding some training Sidewinders underwing. The kit just comes with fuel tanks but no pylons or ordnance. The pylons for these came from Shapeways but are not quite right if I'm being totally honest. Still, they're close enough for me. The missiles were pinched from the exquisite Platz Crusader kit (which contains Bullpups, Zuni rockets and Sidewinders).  If you want to go the extra mile with your missiles, have a look at the Sidewinder kit that Shelf Oddity offers (magnification, a caffeine-free diet and a stiff drink advised before attempting these - I'll brave up and try them some day...). I used the excellent Shelf Oddity painting guide for reference. Training Sidewinders were either all black or black with white warheads, as I've done here.

Pretty standard paint job using Hataka red line paints. I kept weathering light - from what I could see, most Cougars of this era were kept fairly clean - and the decals here are for a fairly new aircraft on its first cruise...

Decals are Y-Kraft and were thick, poorly printed and tricky to use I'm afraid (fortunately more recent Miniwing releases now come with screen-printed decals). I discarded the insignia altogether in favour of some from the spares box. The only option is for a VF-43 aircraft. VF-43 transitioned from the Bearcat to the Cougar in 1955 and operated the type until 1959. The decals show a VF-43 Cougar as it looked when assigned to Carrier Air Group 4 aboard the USS Saratoga on its shakedown cruise in the Atlantic in late 1956.The decals for the yellow livery on the nose and fin just about worked with some Humbrol decalset persuasion, but I overpainted the decal to make it consistent with the yellow wing tips. I repainted freehand some of the black lines too, which were very pixellated. I left the wing walkways alone - grudgingly.

The colourful people milling about are the Heroes deck crew - exquisitely carved representations (which one day I may be able to do justice to - a bit more touching up needed on these guys). The Heroes painting guide is invaluable in making sense of the Technicolor carrier deck outfits seen at the time. I'm pretty fond of Bruno on the right there...

The carrier deck vehicles are from Brengun, though I know the MD-3 carts were not introduced until the early-1960s, i.e. after these Cougars were withdrawn from service, so it's slightly fanciful to pose them together. Still, I always have fun photographing these things (you can probably tell).

And onto the shelf

And here the two Cougars are together.

Finally a picture with the Cougar's stablemate - the Tiger - and the earliest Skyhawk.