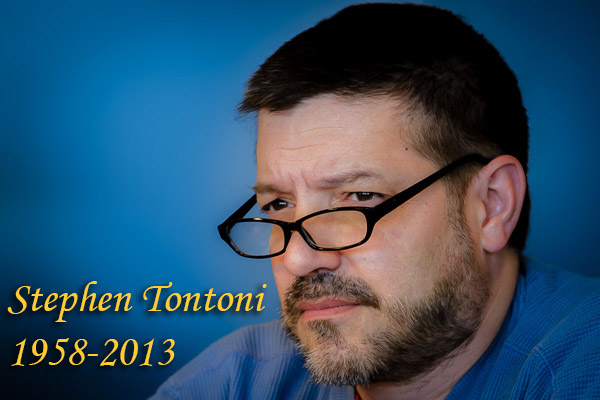 In so many ways, this hobby is a solitary one. A relaxing pastime for many, hidden away in a room, crouched over the requisite 12" square workspace. For some, though, modeling is much more than that. It is a way to interact with others, introduce people to history, and perhaps show a bit of who we are. Stephen Tontoni was one of the latter, and his passing last week at the young age of 55 has left a large hole in the international modeling community. A longtime fixture of the Seattle-area modeling clubs, Stephen was also very active in modeling around the country, and indeed around the world.

Stephen grew up in upstate New York, but moved to Seattle in the early 1980s, where he worked as a sign language interpreter. His desire to help others covered both his professional and personal lives, and he took a very active part in both the Seattle IPMS and NorthWest Scale Modeler clubs. His involvement in IPMS led to his regular appearance at the IPMS Nationals, where he both entered and admired models of all types. It is quite possible that Stephen had more fun in the vendor rooms, and the after-hours get-togethers with him were definitely some memorable times. Always quick with a smile, Stephen had a knack for making life-long friends over a pint or two.

Stephen's sense of humor was soon to show up in his modeling, and it was firmly in place by the time he wrote his first article here at Internet Modeler. A tongue in cheek piece on Israeli P-47s, this set the tone for an almost annual occurrence of April Fools subjects, which each year seemed to outdo the previous. Stephen's interest in modeling was not just humorous fictitious aircraft, but funny and odd real planes as well, such as the T-6 biplane. His tastes in subjects varied greatly, and he was more likely to build a model of something from an obscure corner of the globe than a common subject.

His passion for passing on skills and information fit well here at Internet Modeler, and his articles over the past dozen years have been some of the best. Simple concepts, such as how to organize your model build, gave modelers a look at a different way of doing things, and Stephen always presented his ideas as just that, ideas from which the reader could take what they wish. Teaching simple modeling skills, such as making your own markings, gave new modelers a taste of how we did things in the days past, and his personal challenges added another level of fun to model building.

Stephen's most enduring legacy is with his association with the NorthWest Scale Modelers group. He was an important figure in organizing the annual display held at Seattle's Museum of Flight, and during those events he could often be found sitting at a table, helping a new generation of modeler take their first steps into the hobby. Another key part of Stephen's involvement at the Museum of Flight was the organization of the two model display cases that featured different subjects throughout the year. Stephen managed to create an interesting blend of subjects and scales over the years, and those display cases have always been a great attraction for those attending the Museum of Flight.

Stephen's passing has come far too soon. We have but one life to live, so it is best to live it fully. Stephen definitely lived his life to the fullest, and his good cheer and warm heart touched a great number of us around the globe. While he may no longer be with us physically, Stephen will continue to be with us in our memories and our models. Rest in peace, my good friend.

For those who want to attend, a memorial service will be held at the Hearing Speech and Deafness Center in Seattle on Sunday, November 3rd at 6:00 PM. All friends and colleagues are invited to attend. Donations in Stephen's memory may be made to PAWS or The World is Fun, a non-profit organization benefiting the Seattle community.